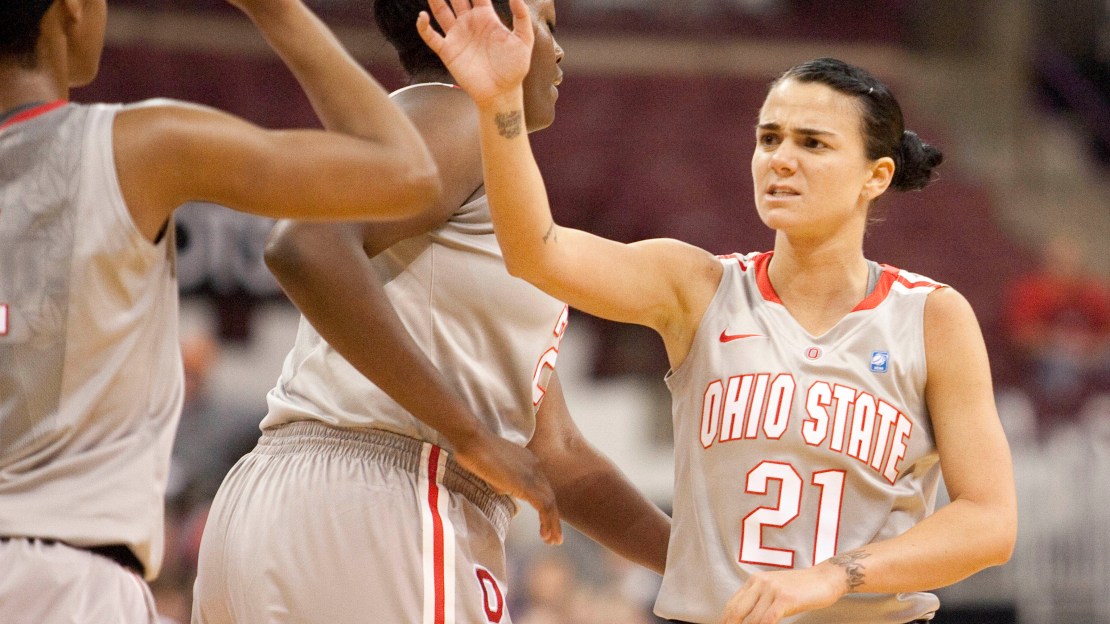 It was a busy Sunday of Big Ten women's basketball, as all 12 teams were in action on the season's final day. No. 15 Penn State routed Minnesota to claim the outright Big Ten title, No. 23 Nebraska took down No. 14 Ohio State in a battle of ranked teams and Purdue blasted archrival Indiana. Catch up on all six games on our BTN.com scoreboard and get stats, video and recaps in this post. Also, the Big Ten tourney bracket was released Sunday night.

(AP) Brittany Rayburn scored 24 points to lead No. 22 Purdue to a 90-58 victory over Indiana in a regular-season finale Sunday. KK Houser had 15 points and seven assists for the Boilermakers (21-8, 11-5 Big Ten), Alex Guyton scored 11 and Sam Ostarello added nine rebounds. Rayburn, who hit four 3-pointers, reached double figures for the 89th time and passed the 1,700-point mark for her career with 1,718.

(AP) Maggie Lucas scored 24 points and No. 11 Penn State smothered cold-shooting Minnesota to claim sole possession of the Big Ten title with a 74-51 rout Sunday. Senior Zhaque Gray added 18 in her final game at the Jordan Center for the Lady Lions (23-5, 13-3), who led by as much as 24 in the first half and 33 in the second. Kiara Buford had 11 points for Minnesota (14-16, 6-10), which kept pace with the league's best rebounding team on the glass but failed to convert several second chances and easy looks inside.

Michigan State closed out the Big Ten regular season on Sunday afternoon, beating Northwestern 76-57 at Welsh-Ryan Arena. The Spartans, who have won seven of their last eight games, finish in a four-way tie for second in the conference at 11-5. MSU will be the fifth seed in the upcoming Big Ten Tournament, playing Indiana on Thursday night at approximately 8:30 p.m. Read the full recap at MSUSpartans.com.

Wisconsin tallied a 72-60 Senior Day win over Illinois on Sunday at the Kohl Center. The Badgers outscored the Illini 43-26 in the second half to end their regular season 9-19 overall, 5-11 in Big Ten play. Morgan Paige recorded a career high, scoring 29 points, 18 of which came in the second half. Taylor Wurtz tallied her second straight double-double, with 21 points and 12 rebounds. Adrienne Godbold paced the Illini with 23 points. Read the full recap at UWBadgers.com.

(AP) Emily Cady scored 24 points to match her career high and No. 23 Nebraska upset eighth-ranked Ohio State 71-57, the Buckeyes' second loss in three games, on Sunday. The Cornhuskers (21-7, 10-6) bounced back from a 20-point loss at Michigan State for only their second win in six games. The Buckeyes (24-5, 11-5) lost for the fifth time in eight conference road games.