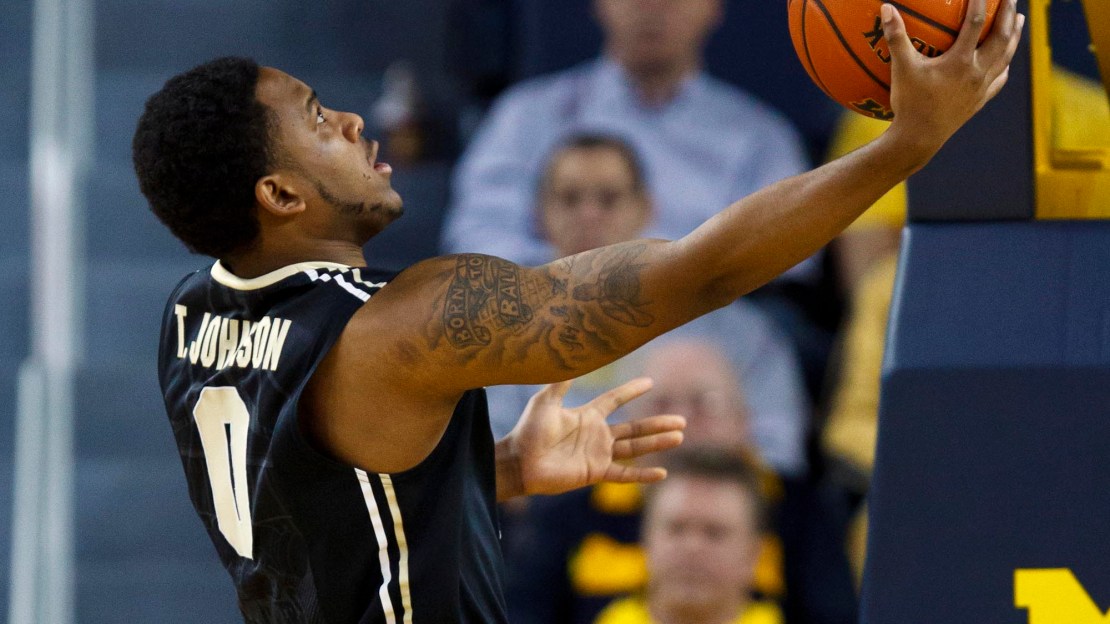 With Saturday?s win over Michigan, Purdue has seemingly punched its ticket to the Dance. At 9-7 in conference play, the Boilermakers are probably right where most expected them to finish this season–still solidly in the field of 68, but not a serious contender for the conference championship. But how they got to this point is very unexpected. Ever since the Baby Boilers arrived at West Lafayette, defense has been the calling card of this team:

The defense has fallen off a cliff this season, and the fact that the team?s best 6 players this season have been guards plus Robbie Hummel surely explains part of that. This is a very short team that tends to get pushed around in the paint.  The flip side of that, however, is that five guards plus Robbie Hummel is an excellent lineup for ball security. The Boilers turn it over on just 12 percent of their possessions, With just two games remaining, it?s unlikely Purdue will match the 2010-11 Wisconsin team?s otherwordly mark of 11.2 percent, but it?s remarkable that we?re seeing a second team so far below 15 percent. Last year?s Badgers and this year?s Boilers are the two most careful teams there StatSheet has data for (dating back to the 2000-01 season), so it?s no small feat.

With Michigan losing and Wisconsin upending Ohio State in Columbus, Michigan State earned at least a share of the Big Ten title. The Badgers got 37 points out of the Jordan Taylor-Jared Berggren duo, a duo that?s been disappointing in Big Ten play. For his part, Taylor?s played well enough to be a serious contender for the 1st team, if not the otherworldly performance he gave last season. Berggren?s play however really dropped off in conference play, so this was a big game for the junior. Not only was he a factor offensively, but he also limited Jared Sullinger to just 8 points in 33 minutes.

Northwestern kept its at-large hopes alive thanks to a controversial call at the end of its victory over Penn State. John Shurna buried two free throws with a couple seconds left after Penn State was whistled for a foul that didn?t have many fans in Bryce Jordan. Frankly, it?s remarkable that the Wildcats were even in this game, considering they shot 33 percent from inside the arc. But the team was deadly from long range, converting 15 of 29 attempts on the night. John Shurna had one of the best games of his career, with 23 points, 6 assists, 5 blocks, 2 steals, and zero turnovers. Bill Carmody?s team likely needs to win at least one if not both of its remaining games against Ohio State and Iowa. Right now the Wildcats are an unimpressive 2-9 against RPI Top 50 teams, so a win over Ohio State would definitely help in that respect. Also, it wouldn?t hurt if Seton Hall (one of NU?s top 50 wins, currently ranked at RPI 45) finished strong.

Elsewhere in Bubbleville, Indiana crushed Minnesota at The Barn. The Gophers? at-large chances were slim heading into this game, but the Hoosiers put the final nail in the coffin. Despite the fact that IU is not a very good defensive team overall, and particularly vulnerable inside the three-point line, Indiana held Minnesota to just 27 percent shooting on two-pointers. It?s easy to see where a healthy Trevor Mbakwe would help this team when you look at games like this. Still, you have to respect this Gopher team which had a much better season than most predicted after its superstar was lost for the year.

Illinois? at-large hopes are still hanging by a thread after Bruce Weber?s team snapped a six-game losing streak with a win over Iowa. Matt Gatens continued his red-hot shooting (22 points on 11 shots), but the rest of the Hawkeyes combined to shoot 32 percent from the field. Meyers Leonard provided the offense with 22 points to go with his 14 rebounds. This wasn?t the prettiest win for Illinois (the Illini turned it over on 28  percent of their possessions), but they?ll take it. Getting an at-large bid won?t be easy though–it will require knocking off Michigan at home and beating Wisconsin at the Kohl Center.

Just one more week left in the regular season. Then the real fun starts, where all you need to win the National Championship is to put together a 10-game winning streak.