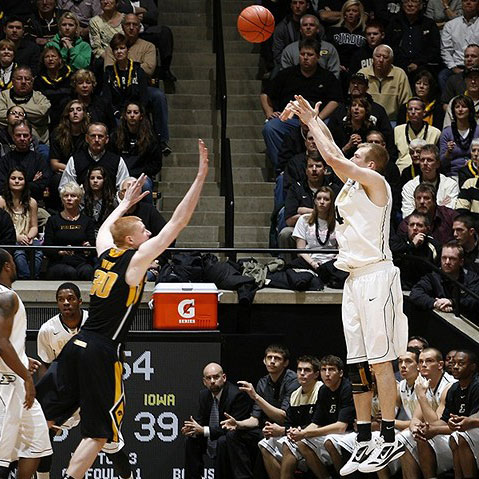 With a little more than a week to go, it has come down to Michigan State, Ohio State and Michigan in the race for the Big Ten title. But other story lines exist. Which four teams will secure first-round byes in the Big Ten tourney? The Spartans, Buckeyes and Wolverines look like locks for three of the slots. But who will get the fourth? Wisconsin? Indiana? Purdue? Or, how about white-hot Iowa?

Speaking of the Hawkeyes, some wonder if they can forge an NCAA-worthy resume. Iowa is 15-13 overall, 7-8 in the Big Ten. Its 4-3 mark vs. the Top 25 is bettered by only Michigan State (6-3), Ohio State (5-4) and Michigan (5-4). And the Hawkeyes are hot, going 4-2 this month with back-to-back wins over ranked teams. Plus, Iowa has a favorable schedule (at Illinois; at Nebraska; Northwestern) that could see it finish 10-8 in the league.

But as of Feb. 23, the Hawkeyes had an RPI of 139. Can all of the good overcome that? It?s gonna be fun to find out, and earlier I took a shot at predicting the Big Ten bubble teams. Here?s my look around the Big Ten.

THREE STOCKS TO BUY
Iowa. Give me some this! The Hawkeyes have toppled ranked teams in consecutive games, first dumping Indiana and then whipping Wisconsin last night. Delicious stuff. Iowa is 7-8 in the Big Ten with a good chance to finish 10-8. It?s true. Could this team dance in March?

Michigan State. Can you say "rollin'"? Sure you can! The Spartans remain the hottest team in the Big Ten, riding a six-game winning streak into the weekend. Draymond Green is playing like the Big Ten Player of the Year for this vintage Tom Izzo team.

Michigan. The Wolverines began the season in the Top 25. And they haven?t disappointed. In fact, they have exceeded expectations by challenging for the Big Ten title. Winners of four in a row and five of its last six, Michigan is just a game behind Michigan State and still dreaming big.

THREE STOCKS TO SELL
Minnesota. The Golden Gophers blew a great chance to greatly enhance their sagging NCAA hopes when they squandered that late lead at home to Michigan State. Minnesota is 1-5 in February and falling fast. Indiana and Wisconsin are next. NIT, anyone?

Northwestern. I know, the Wildcats still have a decent shot to earn that elusive NCAA bid. But in arguably the biggest game in school annals, Northwestern fumbled one away in overtime at home vs. Michigan. Win that one, and it would have greatly improved the Wildcats? NCAA prospects. Now, Northwestern may have to win two of its last three games and at least one in the Big Ten Tourney to feel good about getting that at-large bid.

Wisconsin. Remember that six-game winning streak to end January? Ya, I hardly do, either. The loss at Iowa makes the Badgers 3-3 in February. Up next: A trip to Ohio State. I wonder if Bucky can get his engine started again before the calendar turns to March. This team looks very ordinary when shots aren?t falling.

THREE THINGS I LEARNED
Purdue is going to get in the NCAA tourney. The Boilermakers are hot, despite seeing swingman Kelsey Barlow get booted off the team. Robbie Hummel and Lewis Jackson are healthy and playing their best ball of the season. And D.J. Byrd is one of the hottest players in the league. Beat Penn State at home next week, and the Boilermakers can all but stamp their Big Dance ticket.

Minnesota has no real star. Does that make sense? The end of that loss to Michigan State was a great example. The Gophers lack a go-to guy who demands the ball and is willing and able to take the big shot down the stretch. No one seemed willing or capable vs. the Spartans. It was difficult to watch.

The race for Big Ten Freshman of the Year is too close to call. Is it Indiana center Cody Zeller? Or is it Michigan guard Trey Burke? A great case can be made for each. I lean toward Burke, just because he plays a more critical role on the court as the quarterback of the offense and the fact he has the Wolverines in the thick of the Big Ten race. But Zeller?s influence is undeniable, as he?s the reason why the Hoosiers are enjoying a breakout season.

THREE COACHES OF THE YEAR
Tom Izzo, Michigan State. Last season was disastrous by Michigan State standards, with personnel issues and 19-15 record that included an unceremonious first-round exit from the NCAA tourney. But this year, Izzo has one of his best teams ever (his words) and is primed for a run to a seventh Big Ten crown and seventh Final Four.

Tom Crean, Indiana. He remembers the 6-25 mark. And how can you forget the 10-21 and 12-20 records that followed? That?s what makes this year?s breakthrough so sweet for Crean, who has the Hoosiers pointed on a trajectory toward big things in coming seasons. The Final Four? The national title? Why not?

John Beilein, Michigan. The fact he has the Wolverines in position to perhaps win the program?s first Big Ten regular-season title since 1985-86 (That?s right, the Fab Five never won one) with a freshman point guard is amazing. And more mega talent is on the way next season. It?s gonna be a fun ride in Ann Arbor the next few seasons.

2. Ohio State: Wisconsin; at Northwestern; at Michigan State. The Badgers and Wildcats are poor matchups for the Buckeyes, who should win. Ohio State will have revenge on its mind when it heads to East Lansing.

3. Michigan: Purdue; at Illinois; at Penn State. Get by pesky Purdue this weekend, and the Wolverines should cruise vs. two teams with bleak postseason outlooks.

THREE IMPRESSIVE WINS
Michigan 67, Northwestern 55 OT. It was the second time this season the Wolverines toppled the Wildcats in overtime. And this one was a killer to Northwestern?s NCAA hopes. The gutty win-in which Michigan shot 38 three-pointers-kept the Wolverines in the hunt for the Big Ten crown. And I also have to mention Michigan 56-51 win over Ohio State 51. Trey Burke continued to play beyond his years in tallying a team-high 17 points to avenge an earlier loss to the Buckeyes. And credit the Wolverine defense that limited Ohio State to 38.8 percent shooting.

Michigan State 66, Minnesota, 61. The Spartans trailed for most of the game but took over in the waning minutes, watching the Gophers commit a series of confounding turnovers that Michigan State turned into the game-deciding points. This one was all about toughness, grit and will to win, all trademarks of Tom Izzo?s best teams.

THREE GAMES TO LOOK FORWARD TO
Wisconsin at Ohio State, Sunday, Feb. 26. Earlier this month, the Buckeyes took a 58-52 decision in Madison. If the slumping Badgers aren?t hitting their shots, they will have no chance on Senior Night in Columbus. Think William Buford will be jacked?

Michigan State at Indiana, Tuesday, Feb. 28. You smell that? It?s the scent of a trap game for the Spartans, who can?t look ahead to a visit from Ohio State. Michigan State opened Big Ten play with an 80-65 win over the Hoosiers, who are 16-1 at home. Each team has improved since then, but MSU is on another level.

Purdue at Michigan, Saturday, Feb. 25. The Wolverines have lost just one game this month and can smell the Big Ten title. The Boilermakers are still looking for their first victory over a ranked team this year. Michigan won the first meeting, 66-64, after a Robbie Hummel shot rimmed out at the end. These teams match up pretty well, but the home court (the Wolverines are 15-0 in Crisler Center) and Michigan?s depth may be too much for the Boilermakers.