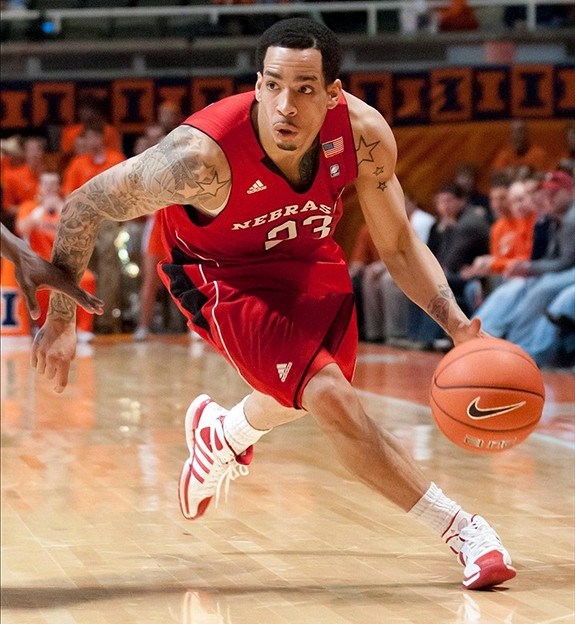 Bo Spencer has been a revelation for Nebraska in what is his one and only season in Lincoln. He transferred from LSU where he was a two-year starter, sat out 2010-11 and has proceeded to be the top player on a Cornhusker squad that recently ended a four-game losing skein with an impressive 80-57 demolition of Illinois

Prior to arriving in Lincoln, Spencer averaged 14. 5 points as a junior at LSU in 2009-10 and 11.4 as a sophomore, so scoring always has been a specialty for the 6-2 native of Baton Rouge, La., who transferred after failing to meet academic requirements at LSU.

The point guard is trying to end his career with a bang as he and the Huskers press toward Nebraska?s first-ever participation in the Big Ten tourney. The Cornhuskers will need to win the tourney to earn an NCAA bid. But a trip to the NIT is possible if Nebraska (12-13 overall; 4-10 in the Big Ten) can finish .500.

Spencer is doing his part. He entered the week as the top free-throw shooter in the Big Ten, hitting 88.0 percent of his attempts. He also paces Nebraska with a 15.5 scoring average as the Cornhuskers wade into Mackey Arena to play Purdue the Boilermakers for the first time in 33 years (join our live BTN chat tonight during the game).

I caught up with Spencer, who has eclipsed the 20-point mark seven times this season, as he prepared for the Boilermakers.

Q: Have you been happy with how your one and only season at Nebraska has gone?
A: It has been fun. The atmosphere here at Nebraska is really great, the fan support, the coaching, it?s just a fun-loving community. But as a team, we could have gotten a lot more wins. But we are starting to get things together here in these final weeks and try to finish the season strong. But it has been fun and I?m glad I came here. If I had to do it over again, I would.

Q: You scored 27 points in that win over Illinois. Was that your best of the year?
A: I?ve had some other good games where I have played hard. But as a team, it probably was our best game. Shooting-wise, it was one of my better games (9-of-11 from the field; 5-of-7 from 3-point land).

Q: Compare the Big Ten with the SEC.
A: It?s different. In the SEC, the talent drops off a little quicker. In the Big Ten, some teams, you may have four or five pros. In the SEC, you always had Kentucky and Florida who were good, but everyone else was kind mediocre or just OK. In the Big Ten, night in and night out, you are playing against great competition that is fast, defending well, taking good shots. There?s a big difference competition-wise and the styles of play are different.

Q: Who is the most underrated player on your team?
A: I would say Caleb Walker. He?s always gonna give you all that he has. He never complains when he isn?t playing. He always attacks the rim and is a great athlete. He?s just a good teammate who I enjoy playing with a lot.

Q: How would you describe your new locker room in the $18.7 million Hendricks Training Complex that opened in October?
A: It is something. I was telling our coaches recently that they may have to start charging me rent because I am there so often. It?s so nice in there. We have a lounge area that has about 400 inches worth of televisions and a nice couch. You can just relax and watch. It?s great.

Q: Describe what it?s like to play for Coach Sadler.
A: It?s fun playing for him. He?s a great coach. If he gets on you, he lets you know what you need to do. He makes sure you know what you need, and he?s gonna put you in every situation to be successful. And he holds you to a certain level. He makes sure he holds you accountable, and that?s what I really respect about him. He?ll let you have your fun, but he expects you to perform when the time comes.

Q: What was it like after you beat Indiana, 70-69, at home in January at home?
A: That was the first time I ever had experienced fans rushing the court. I don?t think they allow fans to do that at LSU. It was crazy and something I will remember for the rest of my life. It was really incredible. If I would have gotten hurt, I wouldn?t have been happy. But I was just so happy for the fans and a great win for the program.

Q: How big is this game at Purdue?
A: It?s really big. We are trying to make a run, win a few games here and get some momentum for the Big Ten tournament. We are just trying to stay positive and keep working hard. It?s not a must-win game. We don?t like that label. We just want to go out and play hard and come out with a victory at Purdue.