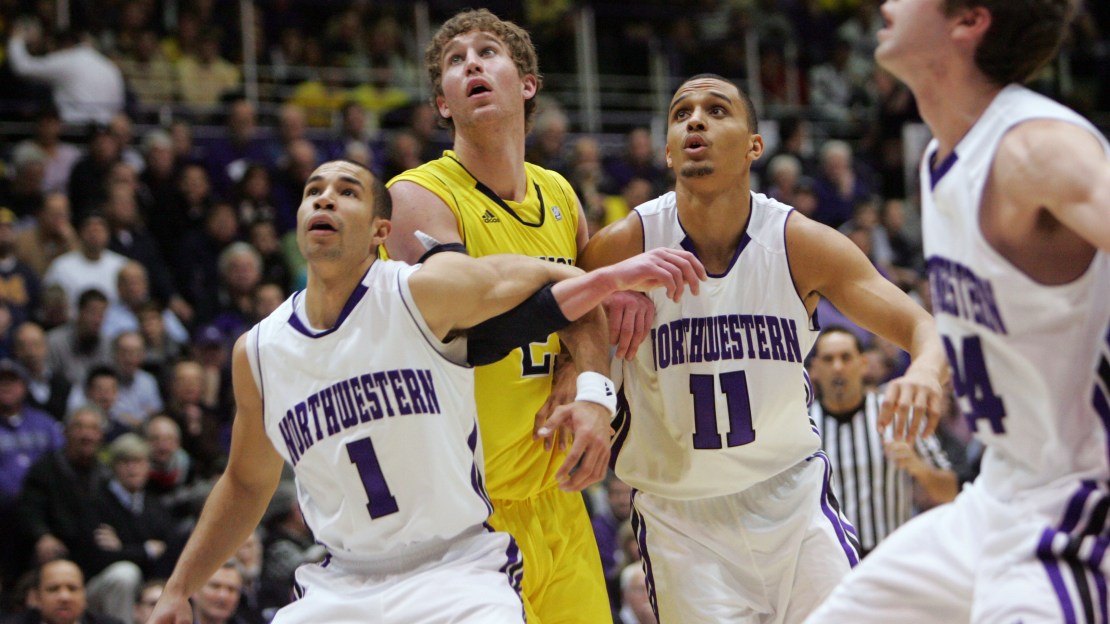 It was looking like it would be an historic night in Evanston. In front of a sold-out Welsh-Ryan Arena, the Northwestern Wildcats were locked in a tight battle with the visiting Michigan Wolverines. With a win, Northwestern would move one step closer to the 9-9 conference record that would almost certainly earn the program its first-ever NCAA Tournament appearance. As a cherry on top, the Wildcats' signature nonconference win was looking even better as Seton Hall had just finished off an impressive win over Georgetown. If Bill Carmody's team could just pull out this victory, it could be argued that it would be the most important night in Northwestern basketball history.

Instead, the Wildcats missed yet another golden opportunity and fell to the Wolverines in overtime. Credit Michigan's defense, which recovered from a terrible first half to shut down a Northwestern offense that has been quite potent the last three weeks. The efficiency breakdown shows how John Beilein's defense changed the game:

The crushing thing for Northwestern is just how close it came to a program-changing victory. Behind some fantastic individual moves from John Shurna, the Wildcats took a three point lead with just under two minutes remaining. The Wolverines responded, as they had all game, by hoisting a three, and Tim Hardaway Jr. found the bottom of the net to even it up. Northwestern would later retrieve an offensive rebound with just under a minute remaining, and it had the potential to go two-for-one by shooting in the first 15 seconds of the shot clock. Even with the offense sputtering, you'd have to like your chances if you get two possessions to score more points than the opponent does in just one possession.

Instead, the Wildcats ran the shot clock down and got only a contested three-point attempt. The Wolverines would then hold for the final shot, and Trey Burke missed a three at the buzzer to send the game into overtime. In the extra period, Michigan hit threes on their first three possessions, effectively ending the game. Northwestern had their chance in regulation and blew it.

We all know Beilein teams like to shoot a lot of threes, but this game took that approach to a new level. Michigan put up 38 of their 56 shot attempts from behind the arc–a whopping 68 percent of their shots. Normally that's way too much of a perimeter focus, but it paid off on this night, with the Wolverines hitting 37 percent from deep and maintaining a svelte 12 percent turnover rate for their trouble. Michigan's three-point shooters also deserve credit for maintaining their confidence–after a second half in which they made just 29 percent of their threes, they came out firing in overtime to grab the victory.

The outcome is certainly disappointing for Northwestern fans, but not all hope is lost. Barring a home victory over Ohio State, the most likely path for the Wildcats includes road wins over Penn State and Iowa (resulting in an 8-10 conference record) and a win or two in the Big Ten Tournament. With the way things are going on the bubble, that could very well be enough. Still, winning last night would have been a game-changer for Northwestern's tournament hopes. The Wildcats are now 1-4 in Big Ten games decided by four points or fewer (or overtime). Flip just one of those and things look a lot brighter.

As for the Wolverines, they keep rolling along with a surprising shot at the Big Ten title. The remaining schedule is not at all daunting (Purdue, at Illinois, at Penn State), so it's not out of the question for Michigan to win out and finish at 14-4. The odds are good that such a record would at least tie for the Big Ten title. John Beilein has his team peaking at the right time.

In the night's other action–if you can call it that–a clearly deflated Illinois team was stomped by Ohio State. The Buckeyes had their best shooting night of the season, a scalding 72.5 effective field goal percentage performance. Ohio State was sloppy with the ball and its defense was merely good, but that kind of shooting can cover for all manner of ills.

Meyers Leonard had a solid game, scoring 21 points and fouling out Jared Sullinger, but the rest of his team was mostly lifeless. A once-promising season has completely unraveled for the Illini, and it's hard to believe that it was just six weeks ago that they were sitting atop the Big Ten after upsetting the Buckeyes.

Tonight brings a doubleheader on BTN (or a tripleheader if you count the tape-delayed showing of Indiana against North Carolina Central). At 6:30pm ET, Nebraska visits Purdue, with the Boilermakers looking to finish strong to lock up an at-large bid. At 8:30pm ET, Michigan State visits a desperate Minnesota team that will be looking to spring a much-needed upset. This is basically the Gophers' last stand.