Dienhart: Setting the stage for the week ahead 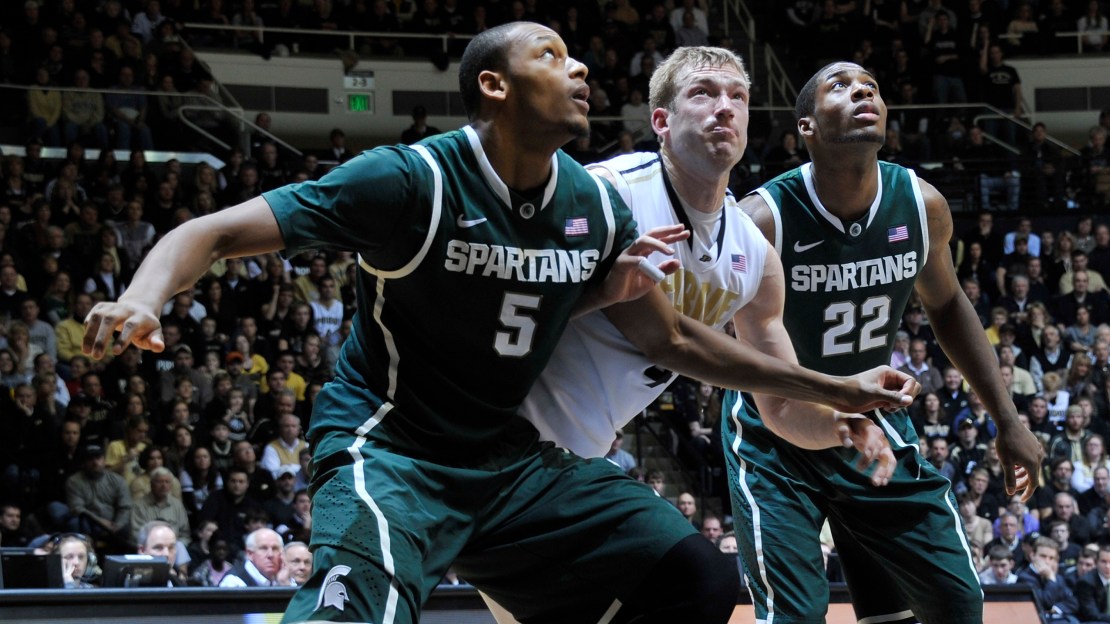 With each passing week, Michigan State is looking more and more dominant. In fact, this past week may have been the Spartans? best yet, dominating Wisconsin, 69-55, in East Lansing and whipping Purdue, 76-62, in West Lafayette. Michigan State is looking to maintain its one-game lead this week, playing at Minnesota and playing host to Nebraska. Neither game looks threatening to the Spartans, but they must remain vigilant against a letdown.

Ohio State and Michigan look to stay a game back of Sparty in what has turned into a three-team race, with the Buckeyes playing two at home (Wisconsin and Illinois) and the Wolverines playing one at home (Purdue) and one on the road (Northwestern).

And know this: The top four finishers in the Big Ten receive byes in the league tournament. Michigan State looks like a lock for one of them. Who will get the other three? Ohio State? Michigan? Wisconsin? Indiana? This week will go a long way toward shaping that race.

Other storylines: Purdue, Northwestern, Minnesota and Illinois are trying to enhance their postseason credentials. And each needs help-some more than others. That?s you, Gophers and Illini.

And one oddity: Indiana plays North Carolina Central (find TV coverage). Weird, right? The game originally was slated to be played earlier in the season. But the Big Ten schedule included two gaps in February: six days between the Illinois and Northwestern games, and seven days between the at Iowa and at Minnesota games. Tom Crean didn?t want his team off that much that close together, which is why he moved this game to late February.

Following is a look at the week ahead.

Game of the week: Wisconsin at Ohio State, Sunday, Feb. 26. Time is running out in each team?s quest for the Big Ten title. Truth be told: The loser probably is out of the running, or will need a lot of help — as Michigan State paces the pack with an 11-3 Big Ten mark and the Buckeyes are 10-4 and Badgers are 8-5. This one may come down to which team can shoot best.

Don?t overlook this matchup: Michigan at Northwestern, Tuesday, Feb. 21. The Wildcats (16-10; 6-8) almost escaped Ann Arbor with a victory when the teams met on January 11, dropping a 66-64 overtime decision. Could Northwestern pull the upset this time vs. Michigan (20-7; 10-4)? It would greatly enhance the Wildcats? NCAA resume and severely damage the Wolverines? quest for their first Big Ten regular-season crown since 1985-86.

Must win: Purdue at Michigan, Saturday, Feb. 25. The Wolverines are hot, coming off a huge home win over No. 6 Ohio State on Saturday to push their winning skein to three games. Even better: Michigan is just a game behind front-running Michigan State for first place in the Big Ten. The Boilermakers (17-10; 7-7) are still looking for their first win over a ranked team and looks to augment an NCAA resume that lacks pizzazz. Purdue will have revenge on its mind, as the Wolverines came away with a 66-64 win in Mackey Arena earlier this season.

Injury update: Travis Trice. The Michigan State guard hurt his right ankle in that big win over Ohio State on February 11. The freshman has shown promise, averaging 5.2 points as he adjusts to the physical Big Ten. Trice has missed the Spartans? last two games, wins over Wisconsin and at Purdue. MSU has depth, with Brandon Wood carrying a bigger role. But Wood is fighting through a shoulder strain. Bottom line: The Spartans could use Trice, who is averaging 18.5 minutes.

Big week: Minnesota. The Golden Gophers (17-10 overall; 5-9 Big Ten) are slumping, losing three in a row and four of five. But Minnesota has two big opportunities this week with Michigan State (22-5; 11-3) coming to The Barn on Wednesday and Indiana (20-6; 8-6) visiting Sunday. Without a doubt, the Gophers have to find a way to earn a split to prop up whatever remaining NCAA hopes they possess. Earlier this season, Minnesota lost at Michigan State but stunned the Hoosiers in Bloomington.

Stat watch: 26, the number of years since Michigan won the Big Ten regular-season title. It was back in 1985-86, with Bill Frieder as the coach of a team that featured the likes of Antoine Joubert, Gary Grant, Roy Tarpley, Richard Reliford, Butch Wade, Robert Henderson and Glen Rice. Aside from Penn State and Nebraska-which weren?t in the league then–the only Big Ten teams that have gone longer without a crown are Northwestern (1932-33) and Iowa (1978-79). (Minnesota?s 1996-97 title was later vacated).