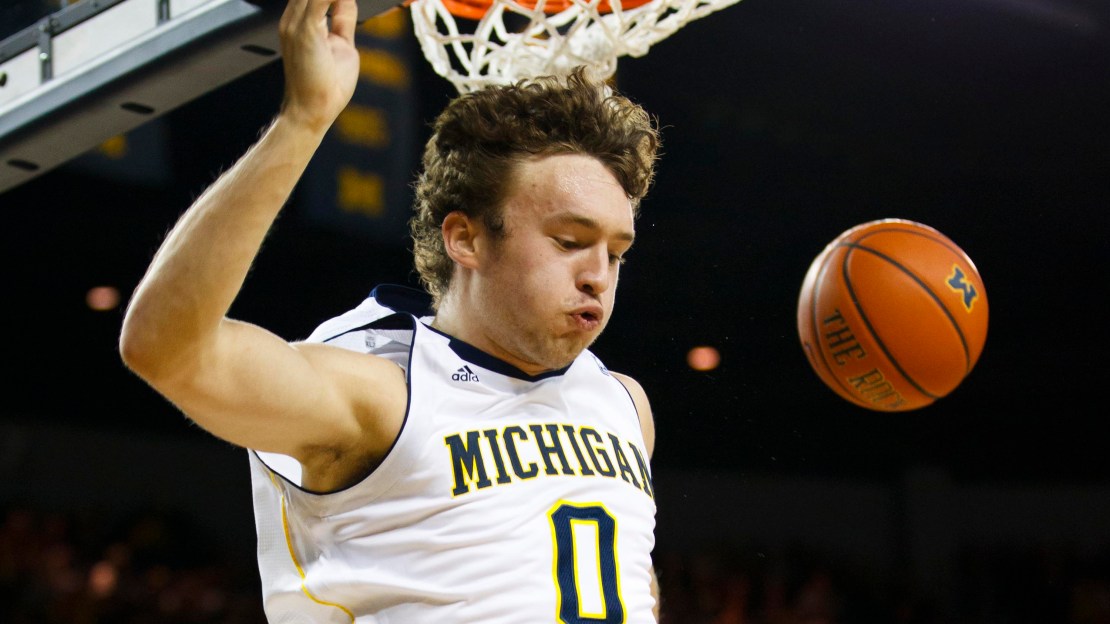 Zack Novak is the face of Michigan, the embodiment of what John Beilein is trying to build the Wolverine program into in his fifth year in Ann Arbor. Just watch Novak on the court. The energy, the desire, the passion. And, the production. He?s the inspirational leader of a Michigan team that is 19-7 overall and 9-4 in the Big Ten, very much in the hunt for the Big Ten title.

And he knows the importance of this Saturday night?s visit from No. 6 Ohio State. It?s a huge game in the Wolverines? quest for their first regular-season Big Ten title since 1985-86 when Bill Frieder led the program to its second championship in a row. In addition to fighting to stay in the league championship hunt, Novak and Michigan also are looking to claim one of four byes in the Big Ten tournament.

The 6-4 senior is averaging 9.7 points, 4.7 rebounds and 2.0 rebounds. And the sweet-shooting lefty also is hitting 43.3 percent of his 3-pointers (42-of-97). But, again, the Chesterton, Ind., native?s values goes well beyond statistics (full Novak stats page here).

Novak brings fire and desire to the court, as well as a boundless energy that teammates feed off of. That?s one reason why the Wolverines are in this position as teams make the turn into the home stretch of the season.

Michigan has won three of its last four and is looking to end a six-game losing skein to the Buckeyes, who are tied for first in the Big Ten with Michigan State with a 10-3 mark. After Ohio State?s visit, Michigan finishes the season with three road games: Northwestern, Illinois, Penn State.

Novak knows what?s at stake for the Wolverines, and he wants to punctuate a career that has seen his start over 100 games and score over 1,000 points in style. I talked to him as he prepped to take on the Buckeyes:

Q: What does this Ohio State game mean to the program?
A: It?s a big game for us, there?s a lot of attention around it. But most importantly, for where we are at in the standings, it?s one that we really have to have.

Q: How has the program changed since you got here as a freshman in 2008-09?
A: It?s really overwhelming change. When you look at our facilities, it?s night and day from what it used to be to what they are now. Crisler wasn?t great when we first got here, but now it is something. And I don?t know how many sellouts in a row we have now, but the crowds have been great and there is a lot more buzz around the program.

Q: When you arrived, did you envision being a 1,000-point career scorer?
A: No, probably not. I was joking around with the guys after it happened that if you play enough minutes, you are gonna get that by default. It doesn?t average out very well (8.1 ppg), but I guess it is pretty cool. I never thought that was going to happen.

Q: Why are you No. 0?
A: Honestly, every number I wanted already was taken, so I just decided to change it up a little bit.

Q: You and Stu Douglass (Carmel, Ind.) are natives of Indiana. Do you have a pretty close bond?
A: We have known each other for a while now. It has been fun playing with him and having someone to go through this whole process with.

Q: Were you guys recruited hard by Indiana or Purdue?
A: I think I got a media guide in the mail from Purdue once. But that?s about all I heard from either school.

Q: What about Stu?
A: I think Purdue recruited him a little bit harder. I don?t think Indiana really did. His other big one was Harvard.

Q: Do you know the last time Michigan won the Big Ten regular-season title?
A: 1986.

Q: Can you believe that?
A: No. You would have thought the Fab Five guys (1991-95) would have won one. That will make it more special if we can get it done.

Q: Can this team make a deep run in the NCAA tourney? Michigan hasn?t been to the Sweet 16 since the 1993-94 season, when it reached the regional finals.
A: I like our team right now. I like how we are coming together. We have a really solid point guard, multiple threats who can score and coaches who are really smart. I think we have the ingredients to be able to do that.

Q: Did you think freshman point guard Trey Burke would be this good?
A: Trey does get his publicity, but people don?t realize how good he is. He may be the most underrated player on the team. For what he?s doing as a freshman, and not necessarily his scoring, but just his demeanor on the court and the way he leads the team. He?s just very solid.