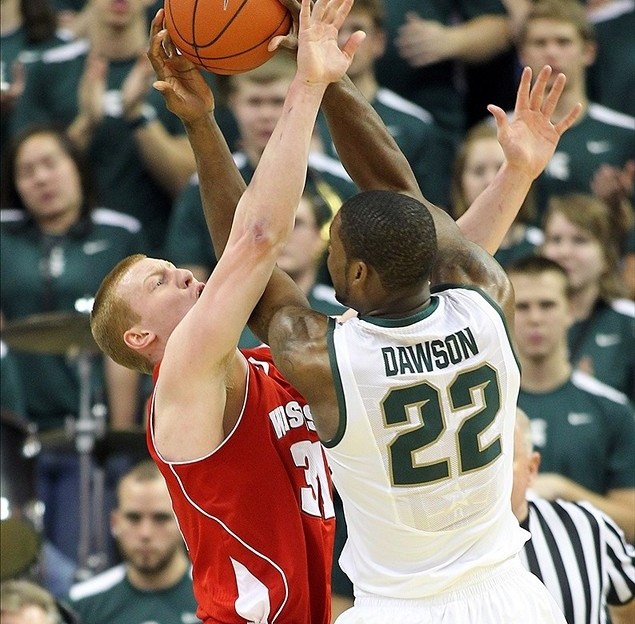 Draymond Green scored 22 points, grabbed 10 rebounds and handed out five assists as No. 8 Michigan State defeated No. 17 Wisconsin 69-55 on Thursday. Keith Appling had 20 points and Derrick Nix added 12 (see full box score). The Spartans (21-5, 10-3 Big Ten) have won four straight – the longest active streak in the conference – and six of their last seven games. After building an early cushion, Penn State needed to hold off a late charge by Iowa to win 69-64. Tim Frazier sparked Penn State (12-15), as he scored 18 points (see full box score). Dive into this post for more details and links.

FINAL: Draymond Green scored 22 points, grabbed 10 rebounds and handed out five assists as No. 8 Michigan State defeated No. 17 Wisconsin 69-55 on Thursday at the Jack Breslin Student Events Center in East Lansing. Michigan State (21-5) hit 51 percent of its field goals (24-of-47). The Spartans went 19-of-25 from the charity stripe as a team (76 percent).  Ryan Evans scored 17 points and grabbed six rebounds for Wisconsin (19-7) in the game. The Badgers struggled from the floor, shooting 35 percent (18-of-52). Wisconsin also got double-digit efforts from Jared Berggren, who scored 10 and Jordan Taylor, who scored 13. The Spartans trailed 12-8 in the first, but a 23-5 run allowed them to take a 14-point lead with 35 seconds left in the first half. Appling finished the run off with a field goal, which helped Michigan State lead 31-19 at halftime.

HALFTIME: No. 8 Michigan State held No. 17 Wisconsin's offense to 32 percent shooting, helping the Spartans to a 31-19 halftime advantage. The Badgers led 12-8 when Michigan State went on a 14-0 run to take a 10-point lead. Wisconsin put the clamps on the Spartans' three-point game (1-of-6, 17 percent from long range), while Michigan State shot 60 percent in the first half on two-point field goals. Draymond Green led the way for the Spartans in the first half, with seven points and six rebounds. The Badgers' Ryan Evans already has six points and four rebounds.

FINAL: After building a 16-point cushion, Penn State needed to hold off a late charge by Iowa to win 69-64 on Thursday at the Bryce Jordan Center in University Park. Iowa (13-13) can look to its performance from the charity stripe as one of the factors in the loss, as the Hawkeyes shot  67 percent (18-of-27) from the line. Aaron White had a good game for Iowa with 16 points, 10 rebounds, and 6-of-11 shooting from the field.

Tim Frazier sparked Penn State (12-15) with 18 points, three rebounds, and four assists in the victory. The Nittany Lions went 22-of-28 from the charity stripe as a team (79 percent). Other Penn State scorers in double figures included Cammeron Woodyard, who scored 13, and Jermaine Marshall and Jonathan Graham, who each scored 10. The Hawkeyes shared the ball with 13 assists on 20 baskets. Iowa also got double-digit contributions from Roy Devyn Marble, who scored 13 and Matt Gatens, who scored 21. Both teams had 31 rebounds in the game.

HALFTIME: Penn State went on a 11-3 run to close the first half on a high note and leads Iowa 38-24. The rebounding edge belongs with the Nittany Lions, by a 18-12 margin on the boards. The game was tied 10-10 before the Hawkeyes went into a funk, going the next 3:14 without scoring, and allowing Penn State to take a 20-10 lead in the first. Cammeron Woodyard has been carrying the Nittany Lions but having already clocked three fouls, he'll need to tone down his aggression going into the second half.

Woodyard scored 12 points and shot 4-of-6 from the field. Eight Penn State players scored in the half. Aaron White and Roy Devyn Marble carried Iowa in the first half with 19 of their team's 24 total points. White has scored 10 and Marble has added nine. Penn State has been able to keep the Hawkeyes' leading scorer, Matt Gatens, under control thus far. The senior enters halftime with two points, well below his season average of 14. Iowa shared the ball, finishing with five assists on seven field goals in the first half.