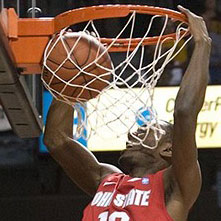 It?s that time of the week where the best of your questions are posted and I do my very best to answer them. As you would suspect, there are plenty of basketball questions-and some very concerned Ohio State fans.

Got more questions? Drop them to me here. You're on Twitter? Stay in touch with @BTNTomDienhart. And if you want a daily dose of headlines from my colleagues working around the Big Ten, check out out my daily web links. I'm also working on another fun Q&A project and I'll can tell you more about it in the coming days and weeks.

Is there anything Thad Matta and Ohio State can do to cover for Deshaun Thomas' defensive deficiencies? It seems like a massive weak spot heading into March. Can OSU hide him some way on defense? -Carrie

I have heard others be critical of Thomas? defensive skills. As a sophomore, he?s still a work in progress on many levels. And defense, for sure, is an area that needs improvement. But, honestly, it?s almost impossible to hide on the basketball court. Every player needs to do their part on the defensive end. Opponents know who does and doesn?t play good defense-they scout. And that exasperates the situation for a player who doesn?t play good defense. So, I?m afraid the Buckeyes are going to have to live with Thomas? shortcomings on defense for now. But, hey, he is a great offensive talent.

How do you figure the national rankings? Michigan State beat Ohio State. Yet the polls placed the Spartans behind the Buckeyes. I know, the matter should be settled in their season-ending rematch in East Lansing, or in the Big Ten tournament. But these rankings impact NCAA seeds and which team gets favored regionals. Don't the pollsters value what actually happened on the court? – Greg

Lesson No. 1, Greg: Pay no attention to the polls. They are for entertainment purposes only. They mean absolutely nothing when it comes to the NCAA selection committee filling out its bracket and seeding teams. I hope this thought puts your mind at ease.

Whoa! One at a time! Let?s start with the defense. I think there could be issues. I like the fact Kirk Ferentz promoted Phil Parker to the coordinator spot with the retirement of Norm Parker, but personnel may be an issue. The back seven should be OK led by linebackers James Morris and Christian Kirksey, the team?s top tacklers in 2011, back. And the secondary led by Micah Hyde should be OK.

The line? Issues loom. All four players who started up front in the bowl game are gone, so developing the front is priority No. 1. I think Vandenberg will be fine with the experience he was gained, but his cause would be enhanced if some running backs develop. Who will carry the ball? Attrition has been rampant with Mikail McCall and Marcus Coker both leaving.

The Hawkeyes did ink some good defenders (E Faith Ekakitie; T Jaleel Johnson) and a top back (Greg Garmon). This shapes up as an interesting season for a team with work to do that I think is chasing Michigan, Michigan State and Nebraska in the Legends Division.

Does Ohio State have enough time find another shooter? How much success can the Buckeyes have in the tournament without perimeter shooting? They really seem to struggle with their shots from the outside. -Jessica

Where have you gone, Jon Diebler and David Lighty? You raise a concern that many people have for the Buckeyes. Yes, Jared Sullinger is a beast inside, but defenses can sag on him if they don?t have to worry about Ohio State hitting three-pointers. The focus is on players like Aaron Craft, Lenzelle Smith, Jr., and William Buford to shoot better.

How bad has it been? The Buckeyes have no players ranked in the top 15 in the Big Ten in three-point shooting percentage. And Buford is the only Buckeye ranked in three-pointers made per game with 1.6, but that is just 15th in the league. There will come a game in the tourney when Ohio State will need to hit some shots. Will the Buckeyes be able to deliver?

Entering this week, the Buckeyes primarily were playing just Jared Sullinger, William Buford, Deshaun Thomas, Aaron Craft and Lenzelle Smith, Jr. Matta also uses Evan Ravenel, Sam Thompson, Shannon Scott and Jordan Sibert-each has played over 200 minutes-but this still primarily is a five-man team. And that?s not bad. Yes, having depth is good, but most coaches will tell you they won?t want a rotation that?s more than seven or eight deep. While Ohio State?s rotation isn?t that consistently deep, it still is working for the most part. The bigger issues for Ohio State are shooting and chemistry.

Do you really think that Bo Pelini will open up the quarterback position this spring for all comers? Taylor Martinez just didn?t seem to do it last year and teams played eight in the box to stop the run. -Tim

No doubt, Nebraska struggled to pass in 2011, ranking 10th in the Big Ten (162.7 ypg) with just 13 touchdown passes in 13 games. While the coaches may say the position is ?open,? it is going to be pretty difficult for Martinez to be unseated this spring. Brion Carnes is still very much a work in progress. So, just hope for continued improvement by Martinez, who has that potential.