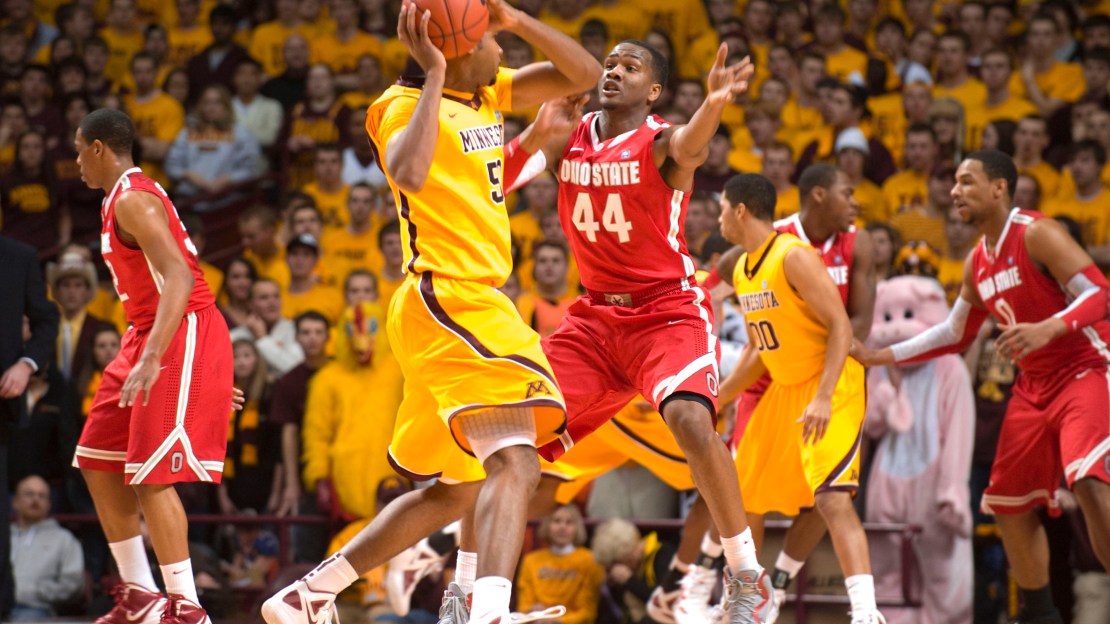 (AP) William Buford scored 24 points to spark No. 6 Ohio State, and Jared Sullinger backed him up inside with 23 points and eight rebounds to guide the Buckeyes to a 78-68 victory Tuesday over Minnesota that moved them a half-game ahead of Michigan State in the Big Ten standings. Buford also had eight rebounds and five assists for the Buckeyes (22-4, 10-3), who snapped back after a humbling home loss to the Spartans. Rodney Williams had 21 points, nine rebounds and two blocks for the Gophers (17-9, 5-8), who tumbled into 10th place in the conference race. Read the full AP recap and see the box score.

FINAL: William Buford scored 24 points, grabbed eight rebounds and handed out five assists as No. 6 Ohio State defeated Minnesota 78-68 on Tuesday at Williams Arena. Jared Sullinger also had a good game for Ohio State (22-4), adding 23 points and eight rebounds. The Buckeyes shot 22-of-28 from the free throw line. Ball movement led to 15 assists on their 25 baskets for Ohio State. The Buckeyes also got a double-digit effort from Deshaun Thomas, who scored 12. Rodney Williams contributed 21 points, grabbed nine rebounds, and knocked down 8-of-11 shot attempts for Minnesota (17-9). Andre Hollins was 3-of-5 from the floor and chipped in eight points for the Golden Gophers. Julian Welch (11) and Oto Osenieks and Austin Hollins (10) also reached double figures.

HALFTIME:  Jared Sullinger scored 12 points on 3-of-4 shooting to lead No. 6 Ohio State to a 40-28 lead over Minnesota at the end of the first half. An aggressive offense and the ability to get to the charity stripe allowed the Buckeyes to take a halftime lead. Through 20 minutes of play, Ohio State is 11-for-14 from the free throw line. The game was tied 12-12 before the Golden Gophers went into a funk, going the next 6:51 without scoring, and allowing the Buckeyes to take a 32-12 lead in the first. Minnesota got points from seven different players, while Ohio State demonstrated its offensive efficiency by racking up nine assists on 13 baskets. Minnesota's Rodney Williams had a big first half, with four points and four rebounds.