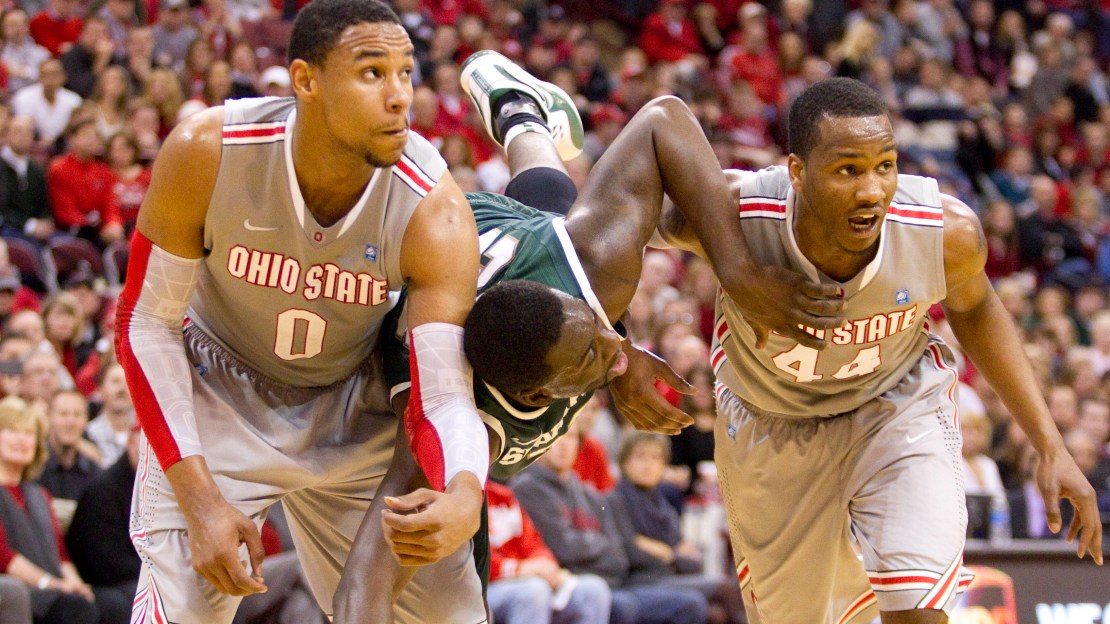 With Michigan State?s huge-and surprisingly convincing–win at Ohio State on Saturday, the Big Ten title chase has become a jumbled four-team race (standings). The Spartans and Buckeyes are tied at the top with 9-3 league marks, while the Wolverines are one half-game behind, at 9-4, and the Badgers are one game behind, at 8-4.

Wisconsin can take a big step toward the top when it visits East Lansing for an important showdown with Michigan State. Ohio State? It?s the team on the spot this week with two big road games. What?s the Buckeyes? psyche? Illinois also is feeling the pressure with a huge visit from Purdue on Wednesday. Welcome to another big week in the Big Ten, America?s top conference.

Game of the week: Wisconsin at Michigan State, Thursday, Feb. 16. The Badgers have been the ultimate road warriors, posting a 5-1 mark away from the Kohl Center in Big Ten games. The victories have come at Nebraska; at Purdue; at Illinois; at Penn State; at Minnesota. It goes without saying this trip to the Breslin Center-where the Spartans haven?t lost–will be Wisconsin?s most daunting. The Badgers have revenge on their mind, as Michigan State won in overtime, 63-60, at Wisconsin on January 3 after a game-tying 3-pointer by Ryan Evans was waved off (watch the play!).

Don?t overlook this matchup: Ohio State at Michigan, Saturday, Feb. 18. This easily could have been the game of the week. These teams just met January 28 in Columbus, with the Buckeyes taking a commanding 64-49 triumph. The Wolverines are unbeaten in Ann Arbor, having already taken down Michigan State in Crisler Center. There are matchup issues all over the court for Michigan, beginning with: Who will guard Jared Sullinger? But motivation won?t be lacking for either team, as the Buckeyes need to win to keep pace with the Spartans on top of the Big Ten standings, while a Wolverine triumph would keep them in the thick of things.

Individual matchup to watch: Penn State at Wisconsin, Sunday, Feb. 19. This one is a bit off the radar, but don?t miss the battle between perhaps the two best point guards in the Big Ten. The marquee should read: Badgers? Jordan Taylor vs. the Nittany Lions? Tim Frazier. Each is a deft penetrator who can get his own shot, though Taylor is stronger and a savvier playmaker.

Must win: It?s imperative that Illinois defends its home court vs. Purdue on Wednesday, Feb. 15. The Boilermakers took it to the Fighting Illini back on December 31 in Mackey Arena, claiming a 75-60 decision. Each team is reeling and fighting for its NCAA life. Illinois has lost six of seven with Bruce Weber hearing from his critics who know he has just two NCAA trips in the last five seasons; Purdue picked up a huge home win over Northwestern on Sunday but still has lost four of its last six and continues to look for the right starting lineup this deep into the season. And defense? Each team is a sieve, though Illinois was better earlier this season.

Injury update: Yes, Penn State isn?t fighting for an NCAA bid, but it still hurt to see forward Bill Oliver announce the end of his career due to recurring concussion-related symptoms. He enjoyed the best game of his career on January 5 in a 20-point home win over Purdue when he hit 7-of-10 3-pointers for a team-high 21 points.

Big week: The Buckeyes lost control of the Big Ten race with that home loss to Michigan State, and they must be careful this week with two games on the road: at Minnesota on Tuesday, Feb. 14, and at Michigan on Saturday, Feb. 18. The Barn is a difficult place for foes to play. And Ohio State will be greeted by a deep, athletic and hungry Gopher team that knows a win over the Buckeyes may be the bow on its NCAA tourney hopes. In the other game, the rival Wolverines would love nothing better than to put a damper on the Buckeyes? Big Ten title dreams while enhancing Michigan?s chase for its first Big Ten regular-season title since-get this-1985-86.

Stat watch: 4.9, number of 3-pointers made per game by Ohio State. That?s the lowest number in the Big Ten. What?s it mean? The Buckeyes lack consistent long-range shooting threats, which could prove troublesome in March as defenses focus more and more on stopping Jared Sullinger inside. Williams Buford, Lenzelle Smith, Jr., Deshaun Thomas and Aaron Craft need to step up.