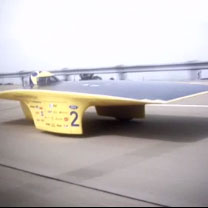 A new episode of BTN?s new original series, Impact The World, airs at 8 p.m. ET Tuesday, Feb. 14. Hosted by Dennis Haysbert, the weekly program showcases some of the incredible Big Ten breakthroughs that are changing lives in the United States and around the world. This week we look at solar car, solar houses and competition to build a spacecraft.

The sixth of the eight-episode series will examine how three Big Ten universities are making an impact through international competition:

Since 1896, the University of Michigan has won more than 350 Big Ten championships in athletics. In 1990 a new Michigan team was formed that doesn?t compete in a stadium or arena, but has been stockpiling national titles at an unprecedented rate. The Michigan Solar Car Team has won six national titles and earned five top-five finishes in the world championships.. The Solar Car is also a fundamental component of Michigan?s International Center for Automotive Medicine - the only center of its kind at any university in the world, where researchers are pioneering studies in automotive crashes and emergency response systems.

Thanks to the U.S. Department of Energy?s Solar Decathlon, students from The Ohio State University have twice had the chance to match wits with college teams from around the world in a competition to design, build and operate solar-powered houses that are cost-effective, energy-efficient and architecturally attractive. In 2011, more than 700 OSU students collaborated to build Encore, an energy-efficient home that finished fifth in the international competition.  The decathlon allows students to showcase their innovative ideas and demonstrates how they can play a major role in sustainability and redirecting U.S. resources, domestically and abroad.

Penn State University was founded in 1855 as a land grant university. More than 150 years later a group at Penn State, named the Lunar Lion Team, is eyeing a new piece of property of universal proportions.  Google is offering a $20 million prize for the first university team to land a spacecraft on the moon. The Nittany Lions are the lone Big Ten representative in the competition, featuring 29 international universities. Penn State?s team is drawing on the university?s expertise in electrical, mechanical and aerospace engineering to assemble a single machine, the Lunar Lion, to serve as a spacecraft, lander and rover.

Impact the World is the first BTN collaborative campus program series produced in conjunction with the Big Ten Conference and its 12 universities.  Since the network launched in 2007, BTN has aired programs produced from each Big Ten university under the University Showcase heading.