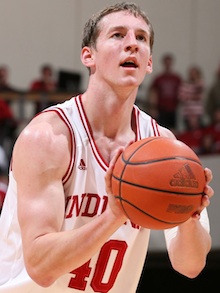 Indiana made a living at the foul line in a chippy 13-point win over visiting Illinois. For about 30 minutes, this was a tight, back-and-forth game, with six lead changes and 14 ties. Over the final 10 minutes, however, the Hoosiers took advantage of the foul-riddled Illini to pull away. Indiana not only got to the foul line at an astounding rate; it also shot incredibly well from there, going 35 of 42 (83 percent). Paired with the Hoosiers' customary accuracy from the field and a low turnover rate, it powered Indiana to a scorching 1.26 points per possession, the highest allowed by the Illinois defense all season.

So just how uncommon is it for a team to shoot as many free throws in a game as field goals, as Indiana just did? Looking at the past 10 seasons' worth of game logs at KenPom.com, I was able to identify only eight such instances by Big Ten teams (nine if you want to count Nebraska as a B1G team retroactively). I estimate that this 10 season span (9.7 seasons, really) covers about 3500 games for these 12 teams. That means a free throw rate of 100 or higher has occurred only about 0.3% of the time for Big Ten teams. For this season, in all of D1, there have been only 24 instances of a 100+ FTR. Doing a back of the envelope estimate, there have been about 7800 free throw rates posted in D1 games this season (340 teams times 23 games per team). We get the same 0.3% estimate of occurrence. That's exceedingly rare.

With the rarity of this accomplishment in mind, let's look at the home and away splits for each team's average free throw rate for the 2011-12 season.

Almost every team gets to the line more at home than on the road (Illinois excluded), but Indiana sees the most pronounced split in the conference. Now, this should not be instantly taken as an indictment of the officials or proof of home cooking; we all know that free throw rates are usually driven by a team's aggressiveness and shot selection, as well as their opponent's propensity to foul. It could just be that the Hoosiers are extraordinarily emboldened by their raucous home crowd and earn more free throws as a result. Also, all these teams have played varying schedules, with opponents that either foul often or don't foul often, so there's certainly a lot of noise in this data. Still, the argument that Indiana is more home-court-dependent than other conference teams certainly gets a boost from this table. Another way to view this is with a graph: We see from the "best fit" line that the general trend is for teams to get more free throws at home than on the road. Indiana is the outlier in the upper right; Illinois is the outlier in the lower right. It should be interesting to see where this data lands at the end of the season, perhaps using conference-only data to smooth out some of the noise.

Indiana had four players score at least 15 points apiece, led by Cody Zeller's 22 points on just eight shots. Jordan Hulls had an excellent game, posting 15 points, seven assists, and just two turnovers. Meyers Leonard and Brandon Paul combined for 30 points before both fouling out, and D.J. Richardson broke out of a personal shooting slump with 19 points.

Wisconsin blew a big lead at Minnesota but regrouped in overtime for an important road win. The Gophers went on a 15-2 run over the final nine minutes to tie the game, and they even had two shots to win in regulation (though neither was a very good look). Obviously, when a team scores just two points over nine minutes, something is wrong with the offense, and that was certainly the case for the Badgers here, as they made four turnovers and shot one for nine from the field over that span. For the game, Wisconsin still scored a very good 1.10 points per possession, largely a result of a whopping 17 points in the five minute overtime period.

Northwestern continued its recent offensive explosion in a 19-point spanking of Iowa. The Wildcats took excellent care of the ball and made over half of their frequent threes. If you can do those two things, almost nothing can keep you from victory. This makes three straight games in which Northwestern scored over 1.25 points per trip, and its at-large candidacy suddenly has new life. The next two games are very tough–at Purdue and at Indiana–but you never know what can happen with a hot-shooting team. All five Northwestern starters scored in double figures, led by Dave Sobolewski's 23 points on just eight shots.

On Wednesday, Michigan and Michigan State blew out Nebraska and Penn State, respectively. The effort from the Wolverines was impressive considering it was a road game, although it should be noted that Huskers center Jorge Brian Diaz did not play. Still, it was an impressive shooting performance for Michigan, and their KenPom rating has finally caught up to their standing in the polls.

The weekend's big tilt is the Saturday 6pm ET tip of Michigan State at Ohio State. The Buckeyes can put themselves two games clear of the field in the loss column should they knock off the Spartans, which might come in handy given that four of Ohio State's final six games are on the road against at-large contenders.