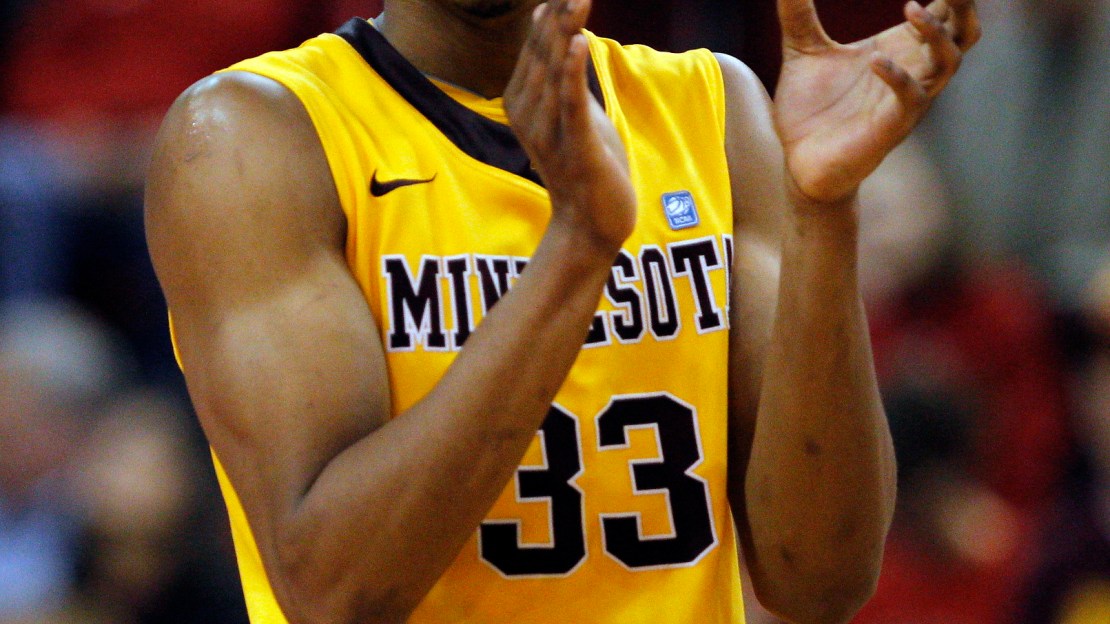 Is there a more electric player in the Big Ten than Minnesota?s Rodney Williams? Of course not. The 6-7, 200-pound junior forward from Minneapolis is a human highlight film, seemingly executing one jaw-dropping, make-your-heart pound dunk every game. Like, for instance, the 360-degree one in this post.

Williams also may be the top player on a Golden Gopher squad looking to augment its NCAA tourney resume as it takes on Wisconsin in a big game on tonight.

Williams paces Minnesota in scoring (10.5), rebounding (5.3) and steals (1.5). And, because of those mesmerizing dunks, Williams also leads the team in shooting, nailing 57.2 percent of his shots. Williams scored a season-high 19 points in a home loss to Purdue in early January, but he has been in a bit of a funk lately, scoring in single-digits each of the last three games after a string of double-digit efforts in seven games in succession. (Find more on Rodney Williams here.)

The Gophers, who are 17-7 overall, 5-6 in the Big Ten under Tubby Smith, need Williams at his best against the Badgers. I caught up with Williams as he prepared to play Wisconsin in what could be a season-defining game for Minnesota, which is 2-2 in its last four games.

Q: When Trevor Mbakwe got hurt, what were some of the thoughts going through the minds of you and your teammates?
A: Once we found out, everyone was kind of shocked. We were dumbfounded as to what we were going to go. But the coaches quickly reassured us that things would be fine. We had a good couple days of practice and maybe our best practice of the season before that Virginia Tech game. Everybody stepped up.

Q: While Mbakwe out, you have had to play the ?4.? How has it been to play power forward?
A: I am enjoying the ?4? spot. I had a couple of games when I was struggling a bit, which was from me not being aggressive. But overall, I am liking it. I feel like I have an advantage on some big guys because of my quickness and athletic ability.

Q: Do you have a favorite dunk?
A: Probably the 360 here against USC (on Dec. 3). That was the first fast break I had in my three years here at home, so I had to make it special.

Q: How much do you practice your dunking?
A: Not as much now. But from high school to my freshman year here at Minnesota, I practiced my dunks all the time. After practice, I?ll be messing around with the guys, just doing some crazy dunks.

Q: Is there one part of your game you still want to improve?
A: I definitely can improve my jump shot. Guys are playing off of me now because they don?t want me to get to the rim and dunk it, so they are giving up the jump shot. It?s getting better but is definitely something I need to work on.

Q: What makes the Barn special?
A: I like it being a home-town kid, growing up, you come to games, you see the crowd and know how it is. And you always wonder what it would be like to be out there. Now that I?m here, I really love it. It gets a lot louder in here than people think. We have a great student section and very loyal fans. Every game here is pretty loud.

Q: What is your other favorite place to play in the Big Ten, aside from the Barn?
A: Indiana. I don?t think I?ve ever been in a gym as loud as Indiana?s. My freshman and sophomore years, Indiana was struggling. But every game there is sold out like it?s the No. 1 team in the nation, so I think that?s my favorite gym to go play in.

Q: Do you think you still have a good chance to make the NCAA tourney?
A: I think we have a good chance. We have five big games at home (Wisconsin; Ohio State; Michigan State; Indiana; Nebraska). And our record isn?t half bad. And we have some wins against quality teams, so I think we definitely have a chance.

Q: How is Trevor Mbakwe still involved with the team?
A: He has been here getting rehab. We see him when we go to the training room and get taped. He?s at every game. He talks to us in the locker room before games and at halftime, giving us advice on what we need to do. He?s like another coach out there.

Q: Who is the most underrated player on the team?
A: I think it?s Elliott Eliason (6-11 redshirt freshman center). People don?t see how hard he works on the defensive end and on rebounding. But we all see the work that he does in games and practices. When he?s out there on the floor, he?s definitely one of the hardest workers.