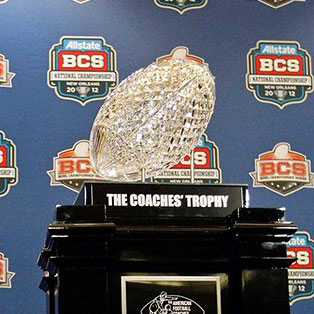 News that the Big Ten is offering structure ideas for a college football playoff is good news for those who dislike a BCS system that has been in place for 14 seasons. Teddy Greenstein of the Chicago Tribune reported this on Monday. I take a look at the benefits and problems with this idea, but you tell me what you think in the comments box below.

In years past, the Big Ten and commissioner Jim Delany had not been advocates for a playoff, staunchly supporting a BCS system that was born in 1998. Back in 2008, the SEC proposed a plus-one postseason system-essentially a "final four." The ACC backed the idea, but the other power conferences-including the Big Ten–didn?t.

But the Big Ten has changed its stance, with poor TV ratings for the most recent BCS championship game between Alabama and LSU being an impetus to study change and offer alternatives to a system whose only purpose is to determine the two teams to play for the national championship at a venue that is rotated between Los Angeles, Glendale, Ariz., New Orleans and Miami.

"Sources told the Tribune that a Big Ten plan would remove the top four teams from the BCS bowl pool and have semifinal games played on the college campus of the higher seed. That would do away with the facade of "neutral" sites such as New Orleans, Miami and Pasadena, Calif., and ease travel concern for fans."

"The championship game then could be bid out, like the Super Bowl."

?We have to listen to the fans; we cannot be tone-deaf,? Northwestern athletics director Jim Phillips, who chairs the Big Ten?s Administrators Council, told the Chicago Tribune. ?The Big Ten is open and curious.?

The current BCS contract runs through the 2013 season, but a new postseason structure could be approved as soon as this fall.

What would be some of the pros to a "plus-one" four-team playoff?

What would be some of the cons?

Aside from a new way to crown a champion, another idea being discussed is requiring a team to win seven games to qualify for a bowl. This could spell the end of some bowls in a system that has swelled to 35 bowls that requires 70 schools, many of which have dubious 6-6 records and/or coaches who have been fired. Having teams that like rewarded with bowls seems to cheapen the reward, doesn?t it. And it?s hardly compelling viewing on a Tuesday night in late-December.

Stay tuned. College football looks like it?s about to undergo some major changes-again. And they all look good to me.

Here are some tweets from around the Twitterverse reacting to the Tribune's story:

It's going to be a fun next few months. Expect many, many other BCS/playoff proposals to leak out. Every conference has one (or more).

Regarding Big Ten idea of 4-team playoff with home semis, no Big Ten teams in top 4 of BCS in last four years

Post coming on Big Ten playoff proposal (http://t.co/922iBmoP, H/T @teddygreenstein), which I love and Big Ten fans should, too.

http://t.co/iyEPuuIq I'm RD and I approve this message– they need to play "semis" in mid December.