Three-Pointers: Breaking down the week in hoops 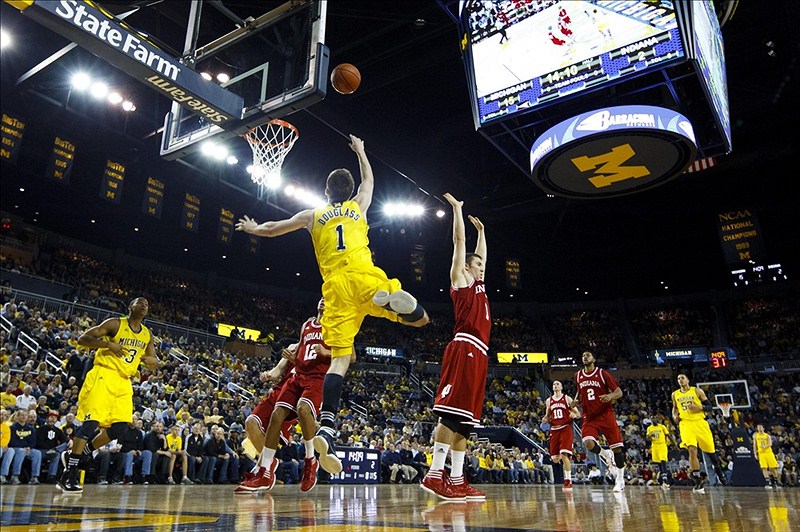 It's time for my weekly Three-Pointers and I?m firing shots as quickly as I can grab a basketball, giving you a quick look back and forward in the Big Ten. From Michigan State's tough road loss at Illinois to the steady play of the Big Ten's big men, it's been another busy seven days of hoops.

There are three men's games on Saturday, including Indiana at Purdue at 7 p.m. ET on BTN/BTN2Go. Then there are three more Sunday games, including Minnesota at Nebraska (1 p.m.) and Northwestern at Illinois (3 p.m.). Both games are on BTN and BTN2Go, too.

And now, my three-pointers…

Three Stocks to Buy
Ohio State. If you aren?t on board already, you should be, people. This is the best team in the Big Ten. The Buckeyes will tote a five-game winning skein into Wisconsin on Saturday in what shapes up as the best matchup of the season up to this point. The Buckeyes are deep, athletic, talented and-maybe most important-motivated after last year?s NCAA flop.

Wisconsin. The Badgers do the Buckeyes two better in the winning streak department, boasting a six-game victory run that marks them as the hottest team in the Big Ten. How did this team ever lose three in a row? Remember that?

Michigan. First the win at Purdue, then a nice victory at home over Indiana ? the Wolverines are good and remain a viable contender for the league title. Win at Michigan State on Sunday, and Michigan can start dreaming big. Really big.

Three Stocks to Sell
Michigan State. Sorry, but I have to put the Spartans on this list as long as Draymond Green is listed as ?day to day? with a sprained knee suffered in the loss at Illinois; he is expected to play this Sunday vs. Michigan. How much? Who knows?  The offense looks discombobulated with Green on the sideline. Keith Appling has to play better than he did in the loss in Champaign on Tuesday. Michigan visits this Sunday in a huge game. Sparty can?t afford another Big Ten loss with two games left against Ohio State.

Indiana. Everyone seems to pat the Hoosiers on the head each time they lose, telling the world that Indiana isn?t really supposed to be THAT great this year. That?s not what I was hearing back in December after Indiana beat Kentucky and Ohio State. Now look at the Hoosiers, losers of five of their last seven. How is this team still ranked?

Northwestern. Jerry Palm still has the Wildcats in the Big Dance, but I am having my doubts. Northwestern lost five of six before winning last night at home vs. Nebraska. The rest of February shapes up as daunting. Can the Wildcats-who used just six players in the win over the Cornhuskers–split their remaining eight games this month?

Three Best Big Ten road wins
Minnesota 79, Indiana 74. I can?t explain it-and I?m not even gonna try. Bottom line: No excuse for the Hoosiers to lose in Assembly Hall to this team.

Wisconsin 67, Purdue 62. The Badgers arrived in West Lafayette on a three-game losing skid with the season threatening to go even further sideways in a venue that has been unkind to Bucky. But Wisconsin perhaps saved its season with the gut-check win and has kept right on winning en route to ending the Boilermakers? 26-game home winning streak.

Michigan State 63, Wisconsin 60 OT. Seems like ages ago when Ryan Evans apparent game-tying 3-pointer as time expired to force a second overtime was waved off. But since then, these teams seem to be going in opposite directions. Just imagine is the Badgers had found a way to win this one.

Three Top Big Men
Jared Sullinger, Ohio State. The sophomore is a beast on the blocks who has added a dimension to his game this season-a long-range jumper. There is no Big Ten player who is more intimidating-or good. It just isn?t fair, really.

Meyers Leonard, Illinois. The sophomore averages 13.5 points in Big Ten action and is third in rebounding (7.8) and second in blocks (1.5). The guy is an athletic freak who has more potential than anyone in the league.

Three Things I Learned
I love watching Minnesota forward Rodney Williams play. Sure, he has a pretty limited offensive game. But he?s an athletic dynamo who is good for one jaw-dropping dunk per game. Who will he posterize next? Don?t miss it!

Jordan Morgan is the key to Michigan. The Wolverines aren?t an overly physical team that?s blessed with lots of size and muscle. Morgan is basically it. And that means he has to be on his game most nights for Michigan to have a chance to win-especially on the road. Points in the paint open things for shooters like Zack Novak and Stu Douglass, making the Wolverines tough to beat.

Nebraska is going to win a few more games it isn?t supposed to. This is a senior-oriented team that is getting better now that the roster is healthy. NCAA hopefuls Minnesota, Michigan and Illinois still must come to Lincoln. And the Huskers have games at Purdue and Michigan State. You all have been warned. Fear the Corn!

Three Truths
Michigan State will struggle as long as Draymond Green is out day to day with a sprained knee. The Spartans are effective running their patented sets, but they seem lost at times without Green on the court directing traffic. It?s the leadership, combined with his double-double talent, that makes him the Big Ten?s best player. He is expected to play Sunday vs. Michigan, but it's unknown how effective he will be.

Ohio State has a brutal February. In fact, it may be the toughest of any Big Ten team. There are two games with Wisconsin; visits from Purdue, Michigan State and Illinois; trips to Minnesota, Michigan and Northwestern.

Three Impressive Wins
Purdue 58, Northwestern 56. Robbie Hummel?s running jumper from the left baseline that provided the game-winning points may end up going down as the shot the saved the Boilermakers? season.

Illinois 42, Michigan State 41. It may not have been a thing of beauty to behold, but it was to a desperate Illini team that entered the game riding a three-game losing streak. The victory over the No. 9 Spartans was Illinois? second over a top 10 team this year.

Michigan 68, Indiana 56. In a battle between ranked teams and the Big Ten?s best freshmen, the No. 23 Wolverines and Trey Burke prevailed over the No. 20 Hoosiers and Zeller. For the record, Burke had 18 points. Zeller had 11 points and 12 rebounds.

Three Games to Look Forward To
Ohio State at Wisconsin, Saturday, Feb. 4. It doesn?t get any better than this in a battle between Big Ten front-runners. Can?t wait to watch Craft and Taylor go head-to-head.

Indiana at Purdue, Saturday, Feb. 4. Let?s go ahead and call this what it is: "The best rivalry in the Big Ten." Tom Crean is 2-31 in Big Ten road games, but the Boilermakers already have lost two Big Ten games at home. More goodies: Purdue has won the last five meetings and six of the last seven in this intense rivalry. The Hoosiers? last victory in West Lafayette came in March 2006. It?s gonna get loud in Mackey Arena.

Michigan at Michigan State, Sunday, Feb. 5. "Day-Day" will play, but no one knows how much. Regardless, the Spartans may be in peril of dropping a fourth game in a row to the Wolverines-and perhaps falling out of the Big Ten race. Michigan is just 1-5 in true road games. This one may come down to Burke vs. Appling.