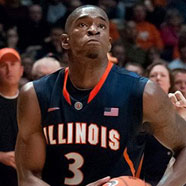 It was a night of singular greatness that has been unmatched by any other Big Ten player this season-and few across the nation, for that matter. I?m talking about Brandon Paul?s out-of-his mind, 43-point effort in a 79-74 win over No. 5 Ohio State back in January.

On that night, Paul couldn?t miss in carrying the Fighting Illini to victory. I was there and it really was something to behold. The junior guard was at it again recently, posting a 28-point, nine-rebound effort in an overtime loss at Minnesota last Saturday, and then notching 18 points in a home win over No. 9 Michigan State on Tuesday.

It?s efforts like those that have Paul on top of the scoring chart in Big Ten conference games with a 20.0 average for an Illinois team that continues to battle through ups and downs as it presses toward the NCAA Tournament.

While a bid to the Big Dance looks like a sure thing, Paul isn?t taking anything for granted as he preps for the stretch run of the season. I caught up with the Gurnee, Ill., native, as he and the Illini (16-6 overall, 5-4 in the Big Ten) prepped for a visit from Northwestern on Sunday.

Q: How big was that win over Michigan State that snapped a three-game losing skid?
A: It was huge. After that Ohio State win, we lost some games (Penn State, Wisconsin, Minnesota) we probably shouldn?t have. Coming home and getting a win over a top 10 team was huge.

Q: Why do you think Illinois has struggled for consistency?
A: I?m not really sure what it is. All of our games have pretty much come down to the wire. We lost a few close ones we probably shouldn?t have. One thing we have to do is finish out games. We have to get better at doing that. I think part of it is just focus at the end of a game.

Q: What part of your game have you been most happy with?
A: I think I have been pretty consistent. I?m not always shooting the ball well. But I?m defending and helping my team on the offensive end. I usually guard the best player on the other team and have done pretty well with that.

Q: What kind of zone were you in when you scored 43 points?
A: That was a great game, that was a lot of fun. Actually, there are parts of it that I don?t actually remember. I was just zoned in the whole game. Being able to watch it on film has been really exciting. I think it was a good game and it was a huge win for us.

Q: Are the coaches looking for you to be a leader?
A: Yes, I think I have taken that leadership role ever since this summer. Vocally, I talk a lot more. I like to lead by example, but I am taking it upon myself to talk to the younger guys and help them in any way I can, as well as guys my age, and I think it has been helping a lot.

Q: What has Meyers Leonard gotten better at?
A: It is unbelievable to play with a guy as talented as him. He?s 7-1 and is athletic as a guard with the way he can run. He has athleticism like a guy like Dwyane Wade. He can jump high and does a lot of things for us. He didn?t play that many minutes as a freshman and he took it upon himself to get better. He did a great job with USA Basketball over the summer. He came back to my hometown over the summer a couple of times, too, to work out. He has a chip on his shoulder and plays hard. Not many people have a big man with that kind of skill. I think he?s one of the best bigs in the country.

Q: What happened at the free-throw line (Tuesday) night?
A: I usually don?t miss those. I think I made the first two to put us up. I went back a couple other times and I missed. No excuse for that. I?m not used to that. But I came back and got a couple rebounds to help us seal the game, so I was happy about that.

Q: What do you like about playing for Coach Weber?
A: He is a guy who is gonna help you no matter what the situation. He?s really friendly and he loves to win. He will try to will you to win, and he?s very motivational. I know he?s always willing to lend a helping hand to even those guys who already have left Illinois. He?s just an all-around good guy.

Q: Is this the best and most competitive you have seen the Big Ten?
A: Most definitely. Every team you play, there are no easy games. We obviously saw that when we went against Penn State. Their record wasn?t that good, but they played hard and they found a way to win at the end. That was one of those games I think we should have won. Every team has players, and this is the best and most competitive conference in the country.

Q: What is the toughest arena to play in?
A: Ohio State is one of the toughest places to play at. They play well at home and are well coached. That?s a game that will be real tough for us (February 21) and will be a challenge.