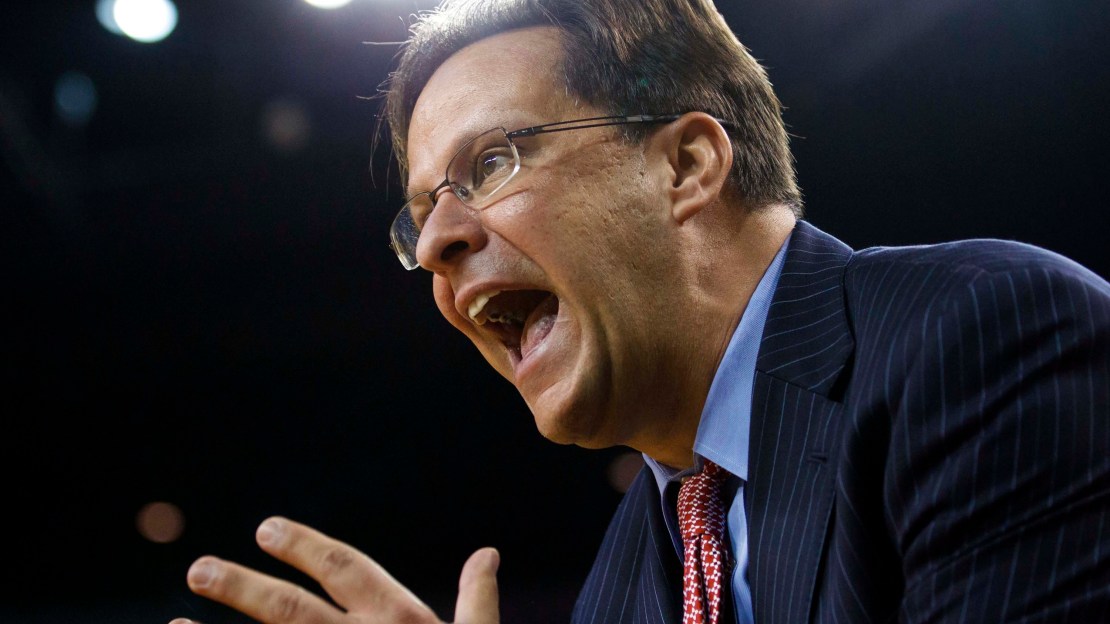 Michigan picked up a nice home win over Indiana that was, depending on your point-of-view, either not as close as or a lot closer than the final margin suggests. John Beilein's team jumped out to a big early lead, which peaked at 20 points before the Hoosiers got going. Indiana then took momentum into halftime and maintained it out of the break. The Hoosiers were able to whittle the difference down to two points on multiple occasions, but they just couldn't get over the hump. Michigan then finished with a flurry to arrive at the final 12-point margin. This breakdown of the efficiencies shows just how well the Hoosiers played during the middle of the game:

Michigan was dominant over the final three minutes to secure the win, and we've seen that type of thing happen to Indiana on the road before (at Nebraska). Ultimately, Tom Crean's squad had been doomed by its sloppy start. Indiana turned it over on seven of its first 19 possessions (a staggering 37 percent turnover rate), and it never fully recovered from the resulting 20 point deficit.

Turnovers have been the only real weakness for this Hoosiers offense, but it's striking to look at just how much the miscues have affected Indiana's output. The following table shows the correlation coefficient (multiplied by 100) for Big Ten teams' offensive efficiency and turnover rate (thanks to the indispensable kenpom.com for the numbers).

The bigger the coefficient (in an absolute sense), the bigger the correlation between turnovers and scoring. The minus sign just means that the two numbers move in opposite directions (i.e. more turnovers correlates with less efficiency and vice versa).

Among Big Ten teams, only Michigan State has seen a closer relationship between turnovers and scoring. This isn't to say that the Hoosiers can't score at all when they turn the ball over–after all, their highest turnover rate of the season came in the 73-72 win over Kentucky–but the general trend is that their turnover rate and offensive efficiency are highly correlated, even moreso than most teams. It's no coincidence that the Wolverines held them to their third lowest output of the season on a night they struggled with turnovers.

For Michigan, this was a tossup type game that went much better than expected, and the result keeps the Wolverines on the fringes of the Big Ten title race. With games at Michigan State and against Ohio State remaining, it's hard to see Michigan finishing with fewer than five losses, but 12 or 13 conference wins is possible. The Buckeyes are projected by KenPom to go 14-4, so they remain the favorites, but the Wolverines could be right there should Ohio State stumble. An upset win at Michigan State on Sunday would certainly help.

Indiana now sits at 5-6 with a slightly negative efficiency margin in conference play. The good news is that after Saturday's trip to Purdue, the Hoosiers will play four of their last six conference games at home, and the road games aren't particularly daunting either (at Iowa and Minnesota). There's potential for a strong finish. I'd be shocked to see this team miss out on the NCAA Tournament, but it may end up a lot closer than it looked a month ago if Crean can't improve his team's defense.

It should be noted that Indiana has gone four weeks since beating someone other than Penn State and Iowa. Although the future remains bright, there's certainly reason for concern with the season's trajectory.

Farther west, Minnesota suffered a deflating close loss at Iowa. The Gophers have been riding the razor's edge all season–six of their ten conference games have been decided by five or fewer points–and it once again came back to bite them. This game was similar in some ways to the Indiana/Michigan game, in that the Gophers came out very sloppy and fell behind by double digits early, only to come back and then falter down the stretch.

Ultimately, Minnesota lost because it was held under a point per possession by the conference's worst defense. Having two of your starting guards post turnover rates over 40 percent can do that (Julian Welch and Joe Coleman).

The Gophers now have six conference losses, which means they can only afford another four to stay on the bubble. Given that four games remain against Wisconsin, Ohio State, and Michigan State, Tubby Smith's team has a tough row to hoe. The glimmer of hope is that three of those games are in the Barn, but it sure would be nice to have one of those Iowa games back right now.

If you like three-pointers, last night's Northwestern/Nebraska matchup was for you. The Wildcats went wild from deep in the first half, resulting in a 15-point halftime edge. Bill Carmody's team went 10 for 21 from three in the first 20 minutes, while shooting just three for nine inside the arc. The Huskers got caught up in the action and took over half of their shots from three too, but with much less success.

Out of the break, Nebraska went over 10 minutes without missing a field goal, exposing the Wildcats' bad defense yet again, but the Huskers were never quite able to take the lead. Both teams were scoring at will, and Northwestern made free throws down the stretch to hold off a late Nebraska surge.

For the game, 54 percent of the shots attempted were threes. For reference, there is no team in the nation that has taken more than half of their season shots from deep, so this was certainly an extreme perimeter-oriented game. The concern for Northwestern is just how badly they defended the conference's worst offense, especially after halftime:

To be fair, Nebraska's offense is in a groove lately, scoring over 1.17 points per trip in back-to-back games, but part of that is due to facing Iowa and Northwestern back-to-back. We'll see if that momentum carries over to Sunday's hosting of Minnesota.

The bottom line is that Northwestern's defense is still nowhere near good enough to get them into at-large consideration. Right now, it looks like the Wildcats will finish closer to the Big Ten basement than the bubble, and that's a shame for a team with such an efficient offense. An unlikely win at Illinois on Sunday could change that outlook.

This weekend brings some outstanding matchups. On Saturday, Ohio State visits Wisconsin in a game that could alter the conference landscape (1pm CT, ESPN). That evening, bitter rivals Indiana and Purdue square off at Mackey (6pm CT, BTN). Sunday has two instate rivalries that can serve as your Super Bowl pregame, as Michigan visits Michigan State (12pm CT, CBS) and Illinois hosts Northwestern (2pm CT, BTN). Who needs football with games like this?