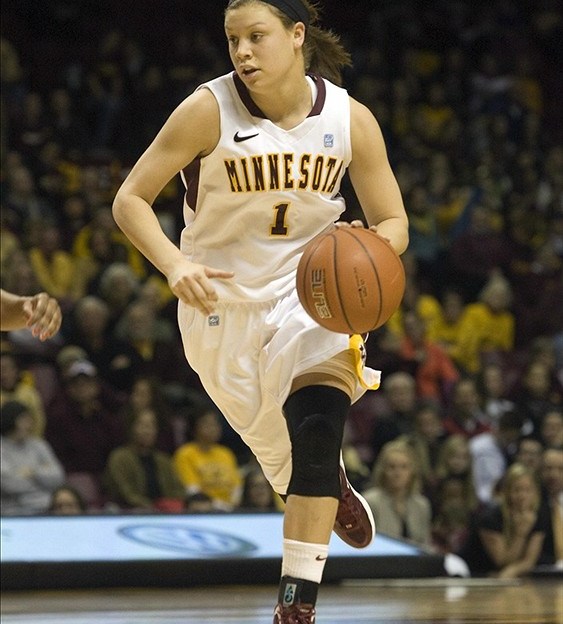 "Rachel The Rookie" certainly hasn?t been playing like one this season, although, Rachel Banham has been racking up the Big Ten Freshman of the Week awards. On Monday, the Minnesota freshman guard was named the Big Ten?s Freshman of the Week for the fifth time this season. Only two players in league history have won it more. Basketball analyst and writer Patricia Babcock McGraw talked to Banham in her latest Gimme 5 audio segment. Jump down in this post to read and hear more.

Last week, Banham led Minnesota to a win over Wisconsin and a huge upset victory over ninth-ranked Ohio State by shooting the lights out. Over those two games, she averaged 19.5 points and hit a whopping 86 percent of her 3-pointers.

It?s been that kind of season for Rachel, who has been making a strong case for Big Ten Freshman of the Year since her first day on the job. She leads Minnesota in scoring at nearly 16 points per game, is hitting 48 percent of her 3-pointers and ranks second on the team in both rebounding and assists.

Find out what parts of the transition from high school to college ball have been easy for Banham, and what have been more difficult. From a personal standpoint, the transition has been smooth. Banham has felt right at home at Minnesota, and not just because her hometown is nearby. She is able to take comfort in a very familiar face on campus. Also, find out what it was like to grow up with a Mom and a Dad who are both cops. Was there any room for mischief in the Banham household?

Listen to my interview here:

And read more about Banham at GopherSports.com.