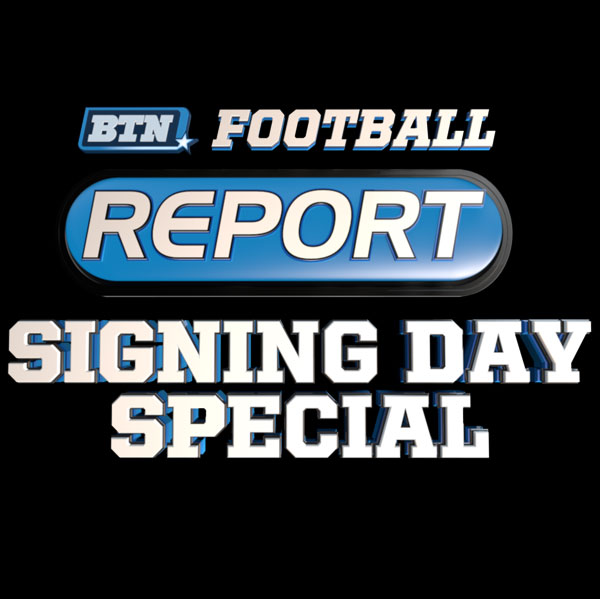 Also at 4:30 p.m., BTN.com senior writer Tom Dienhart joins Trieu and other Scout.com experts in a live online chat to take your Big Ten questions on Scout.com. Read Dienhart's Signing Day preview now and we'll have official classes listed later today via the links to the school websites below in this post. Follow the live chat at Scout.com right now and watch for the Big Ten talk to pick up at 4:30 p.m. Find links to various Big Ten school websites with Signing Day events further down in this post.

Here's what we found:

ILLINOIS
A live blog kicks off at 8 a.m. ET with up-to-the-minute details of incoming letters of intent, and readers can ask questions and make comments, too.  At 11 a.m. ET fans can chat live with Illini head coach Tim Beckman. Find videos at FightingIllini.com and CoachBeckman.com spotlighting each official signee, a feature on the new coordinators, and highlights from inside the recruiting headquarters will be posted later that day.

Our #SigningDay blog is a wrap. Take a look back at how the morning unfolded at #Illini headquarters: http://t.co/zLdVORbx

INDIANA
Get updates via Twitter at Twitter.com/IUCoachWilson and on Facebook at Facebook.com/IUCoachWilson. Also, this year fans on campus can watch  from Memorial Stadium as Indiana is webcasting its Signing Day Show, beginning at 8 a.m. ET. Indiana's Kevin Wilson and his coaching staff will announce names, review highlights and provide commentary on Indiana's 2012 signing class.

Fans can get the scoop on Indiana's newcomers, including biographical information, video footage and photos. The live webcast will be here.  Find more information at IUHoosiers.com.

Just talked with #Wolverines head coach Brady Hoke- he tells me where his most pressing need was, and how he filled it. BTN 430 ET

MICHIGAN
From text alerts to live updates, Michigan has plenty planned for Wednesday. Follow @umichfootball on Twitter for the latest signing news, and use the hashtag #UMSIGNINGDAY to follow and discuss Michigan Football Signing Day all day.

"Nothing." – Hoke in response if anything has changed since Urban Meyer arrived at Ohio

While waiting on signed NLIs to arrive, MSU coaches continue to evaluate video for next year's recruiting class.#MSUNLI pic.twitter.com/KH5y7H4L

Good look at Coach Kill's routine (if you can call it that) during the recruiting season. #Gophers http://t.co/FuzRunwJ

NEBRASKA
Looking for the fastest official announcements of any Nebraska letters of intent? Be sure to follow Nebraska's official account @Huskers for the very latest.

Getting ready for the live recruiting special on #Huskers.com a 2 CT! pic.twitter.com/3XUqM8fg

NORTHWESTERN
Northwestern's 12:30 p.m. ET news conference will be broadcast live to all subscribers of NU's All-Access audio/video service. Plus, links to highlight videos for every new Wildcat will be released exclusively on NUsports.com and Twitter @NU_Sports. Fans can also e-mail their questions to Northwestern coach Pat Fitzgerald on Wednesday morning and Fitzgerald will answer the five best ones. Send the questions to d-meffley@northwestern.edu.

Just talked with #Buckeyes head coach Urban Meyer. Hear which of his recruits he calls "magical" on out Signing Day Special 430pm ET

PURDUE
The Boilermakers' Singing Day Central page includes a live chat with Danny Hope. The Purdue head football coach Danny Hope will take questions from 9 a.m. to noon ET, but you can submit our questions ahead of time right here.

WISCONSIN
The Badgers host a live blog on UWBadgers.com from Coach Bret Bielema?s office as part of their Signing Day Central page. That will be the first place where UW?s signees are officially announced. The signees will also be announced on Twitter at @BadgerFootball. Fans can also watch a Signing Day Live 90-minute show at 11 a.m. ET and Bielema's news conference at 4 p.m. ET.

Here you go: http://t.co/TrwjNtPX RT @DanBlonsky: @BadgerFootball can we get a complete list of all the new #badgers that signed today