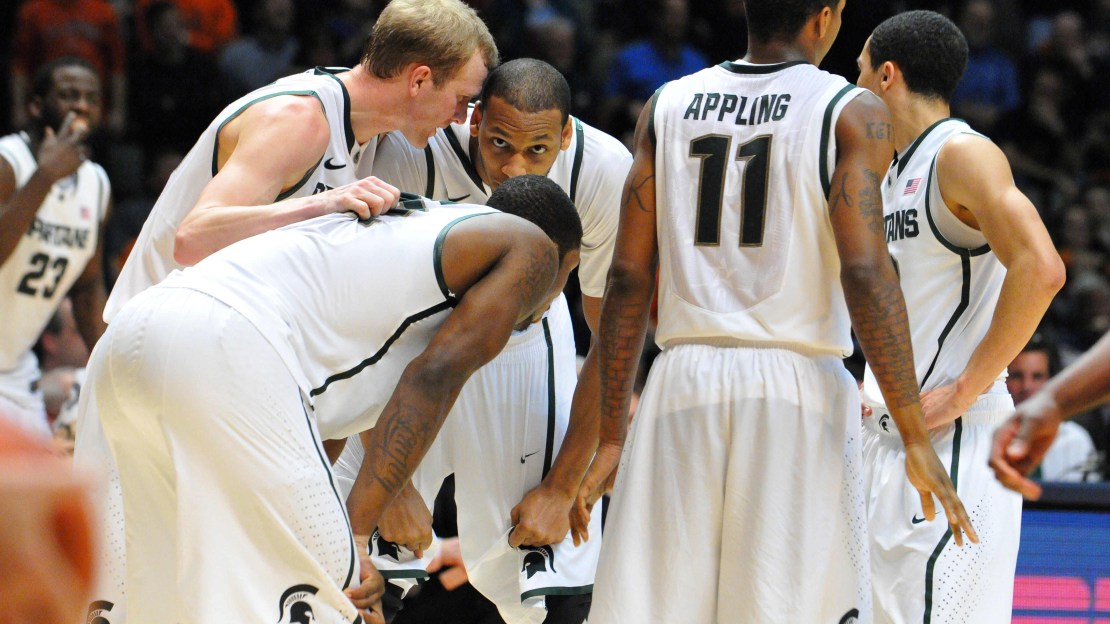 Illinois picked up a much needed home victory over Michigan State, and Illini fans would probably appreciate if the discussion ended right there. It was about as ugly as basketball can get, with turnovers and missed shots aplenty. The Spartans had more missed shots than points, and their 26.7 effective field goal percentage represented the program's worst shooting night in at least 15 seasons (I only have eFG data back to 1997-98). To top it all off, conference player of the year contender Draymond Green, who hadn't played anyway much due to foul trouble, left the game late with an apparent injury. Green has been diagnosed with a sprained left knee and is considered day-to-day, which is certainly better than many of the possible alternatives.

As for the Illini, this gives them their second win over a top 10 opponent and puts them back into good position for locking up an at-large bid. Illinois, for all its offensive struggles, has been a very tough team in Champaign, and winning the remaining home games against Northwestern, Purdue, Iowa, and Michigan would get Bruce Weber's team to nine conference victories. That would almost certainly be enough for a bid, though Illinois' inept offense won't make things easy.

Brandon Paul led the Illini in basically everything, with 18 points, nine rebounds, five assists, two steals, and two blocks. Paul also drew all four Draymond Green fouls (two of them on a charge and subsequent technical). Paul's defense has been phenomenal this season, something we plan to examine later with Stops data. If he'd simply cut down on the turnovers, Paul would be a worthy all-conference selection.

As if one ugly slugfest wasn't enough, Wisconsin and Penn State held their own battle of attrition at the Bryce Jordan Center. It took the Badgers nearly 17 minutes to break into double figures, as a combination of shooting woes and good Nittany Lions defense held them down in the first half.

After the break, Wisconsin played more like its normal self, limiting turnovers and knocking down shots. Its defense remained stout:

Jordan Taylor had yet another good game with 18 points, five assists, and no turnovers. Taylor hasn't shot as well as he did last season, but he's having an outstanding season and should be in the discussion for Big Ten POY. As of now, that race really comes down to Taylor, Draymond Green, and Jared Sullinger.

Tonight, we should see two very tight games on BTN. At 5:30pm CT, Indiana visits Michigan.  The Wolverines haven't lost at home this season, and this game should serve as something of a palate-cleanser for Big Ten fans disillusioned by last night's defensive action–both offenses figure to have the upper hand at their respective ends.

That is followed by the 7:30pm CT tip of Minnesota at Iowa, a huge swing game for the Gophers' budding at-large hopes. The Hawkeyes prevailed by two points in Minneapolis, but Minnesota is clearly playing lately. A season sweep at the hands of Iowa would put the Gophers in a precarious situation. Look for an uptempo game by Big Ten standards, though certainly not on the scale of Iowa's recent 103-89 loss at Indiana.

We can confidently say that all four teams will break into the 50s tonight, right? Pretty please?