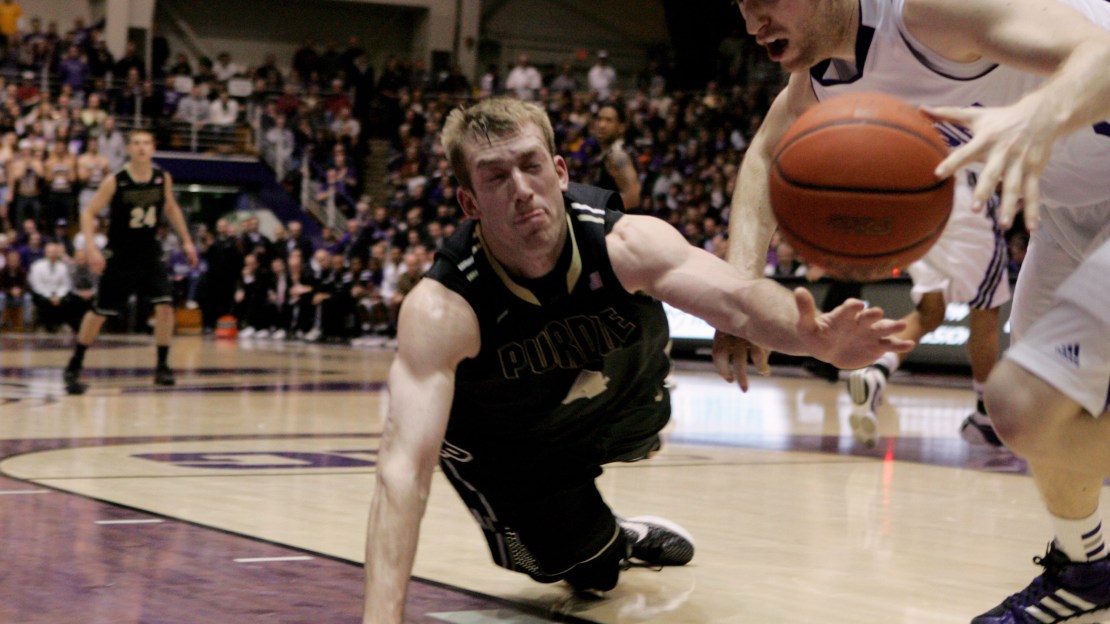 With about 10 seconds remaining, Northwestern had succeeded in holding Purdue?s Robbie Hummel, Ryne Smith, and Lewis Jackson to a combined 17 points. That trio spearheads the Boilermaker offense, which has stalled at times this season when one of those three is having an off night. And in Purdue?s final possession, with the game tied, Northwestern played some of its best defense of the season, forcing Robbie Hummel into a contested mid-range jumper from the baseline.

But he made it. That?s what players like Robbie Hummel do, they make very difficult shots, although this year?s version of the senior forward is clearly suffering from carrying the weight of the offense. While he?s shooting more, his accuracy is down sharply from previous seasons. Nonetheless, there aren?t many players you?d rather have shooting with the game on the line.

The win puts Purdue on solid footing for an at-large bid, with 5 conference wins and 4 home games remaining. As for Northwestern, the loss drops them to 2-6, and they?ll have to really improve over the back half of the schedule to put an end to the streak. The good news is that they have only 2 games remaining against the top 4 teams in the conference. The bad news is that the offense isn?t showing many signs of life. Even against Purdue, one of the worst defenses in the Big Ten (yes, read that again), the Wildcats just barely managed to break the point per possession threshold. Until the offense starts to resemble its traditionally efficient self, there?s not much reason to believe Northwestern will avoid an NIT fate.

Illinois and Minnesota are also a couple of teams staring down at the bubble, and the Gophers came away victorious at Williams Arena. The loss leaves a bitter taste in the mouths of Illini fans, as the visiting team held a 3 point lead with just 12 seconds remaining. Even better, Minnesota was driving in the lane with under 5 seconds left, and no timeouts. All Illinois had to do was let Austin Hollins make his layup and inbound the ball before the Gophers had a chance to set up pressure defense.

Instead, Meyers Leonard committed his 5th and most costly foul of the game, sending Hollins to the line for the game-tying free throw. It was a puzzling decision by Hollins as well, but you can?t argue with the result. From there, Tubby?s team controlled overtime and now these two teams are moving in opposite directions. Minnesota is now 4-1 over its last 5 games, while the Illini have dropped three straight. Generally speaking, when Minnesota scores, it wins:

Indeed, when Minnesota has cleared the 1.01 point per possession mark, it?s undefeated in conference play. But the Gophers will need to keep the scoring up in February, as they?re about to enter a brutal stretch (Pomeroy has the opponent favored in 6 straight games in the month).

As for Illinois, while it?s no fun to lose a game like this, keep in mind that the Illini ?stole? the game against the Gophers at Assembly Hall in Champaign. Back then, it was Julian Welch who missed free throws that could have iced the game. Instead, Bruce Weber?s team caught a break and prevailed in double overtime.

You also feel bad for Leonard, who had a pretty good game otherwise (17 points, 13 rebounds, and 4 blocks). His defense was especially improved from the first matchup between the teams, when Ralph Sampson III dropped 22 on the Illini center. This time, Sampson fouled out after netting just 5 points.

On Sunday, although Michigan hung around for a half, Ohio State was just too much to handle in Columbus. The Wolverines had real trouble scoring against an under-appreciated OSU defense–the 0.83 points per possession represents the worst output by Michigan since losing to Kansas last year. This is actually the best defense Thad Matta has ever coached, and that includes a 2007 team that featured the Swatterific Greg Oden (to say nothing of the perimeter defense provided by Mike Conley). Opponents are scoring under an adjusted 0.80 points per possession against these Buckeyes, something no other team in the country can lay claim to. Ohio State gets the week off, but then heads to Madison for a game that could really change the Big Ten race. If Wisconsin?s truly regained its shooting accuracy, this could be the game it announces itself as a real contender for another Big Ten crown. But if OSU continues to roll, I don?t see any challengers outside the Spartans.