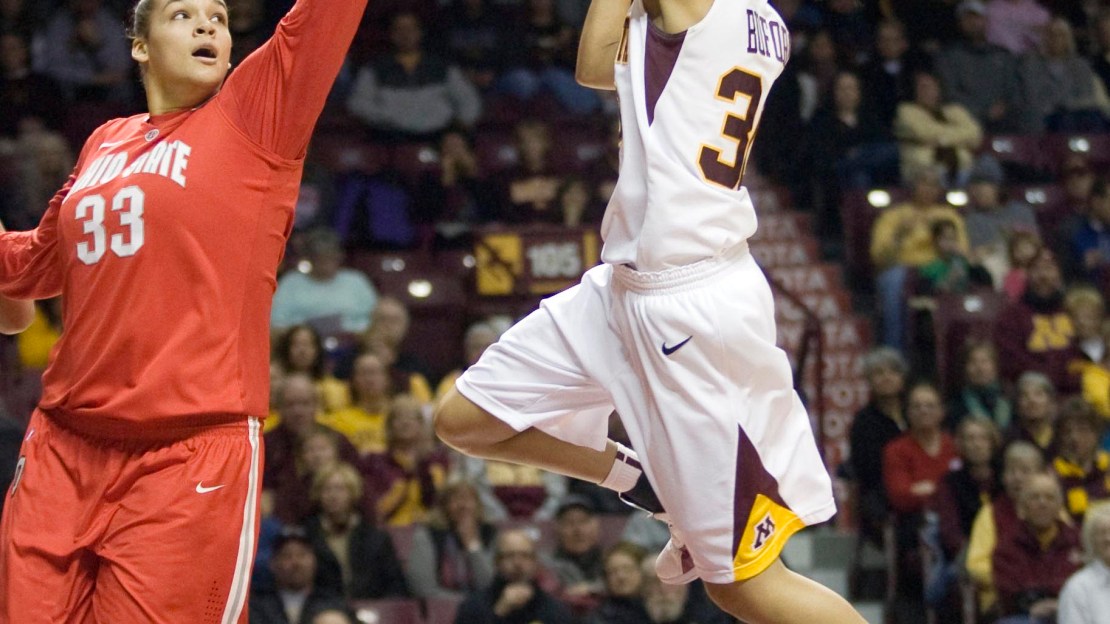 A day after Iowa sent No. 17 Purdue to its first Big Ten defeat, there were a pair of upsets in the Big Ten on Sunday. Behind Rachel Banham's 20 points, Minnesota took down No. 9 Ohio State, 76-65, and Michigan State took down No. 19 Penn State, 83-73. In other action, No. 21 Nebraska toppled Illinois, 61-47, and Northwestern downed Indiana, 68-61. Catch up on all the action on our Big Ten scoreboard and get stats and recaps in this post.

(AP) Rachel Banham scored 20 points and made three 3-pointers, helping Minnesota take down No. 9 Ohio State 76-68 on Sunday. Kiara Buford added 15 points and seven assists for the Golden Gophers (12-11, 4-5 Big Ten), who beat a ranked team for the first time in nearly three years. They did it by dominating the post, outscoring the Buckeyes 36-20 in the paint with Katie Loberg and Micaella Riche taking it to the young Ohio State frontcourt.

(AP) Porsche Poole scored a career-high 32 points and Michigan State rallied to beat No. 18 Penn State 83-77 on Sunday. Following a 28-point effort in a loss to Illinois, Poole was 10-for-15 from the field, including hitting three 3-pointers, for the Spartans (13-9, 5-4 Big Ten). She also had six rebounds, six assists and three steals. The win ended a three-game skid for Michigan State and completed a sweep of the Nittany Lions (16-5, 6-3).

Northwestern fought off a late comeback bid by Indiana to claim a 68-61 victory at Welsh-Ryan Arena Sunday afternoon. Both Dannielle Diamant (22 points, 11 rebounds) and Kendall Hackney (16 points, 11 rebounds) posted double-doubles for NU, the first duo to do so this year. With the win, the Wildcats swept the season series for the first time since the 1996-97 season and improved to 13-9. Read the full recap at NUSports.com.