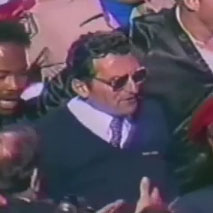 There were many tributes to the late Joe Paterno on Thursday, and we've posted many of the remarks from speakers here. But here we've posted the special video tribute that played on the large screen at the memorial held on the Penn State campus. It includes some wonderful archival footage of Paterno both on and off the field. We've also added a few other video montages from the service in the post below.

Also, here is a short video feature with music that was shown near the start of the memorial.

And here's a third video montage from the memorial service.

And finally, one last video tribute is featured here using the song "Nessun Dorma" from the opera "Turandot."