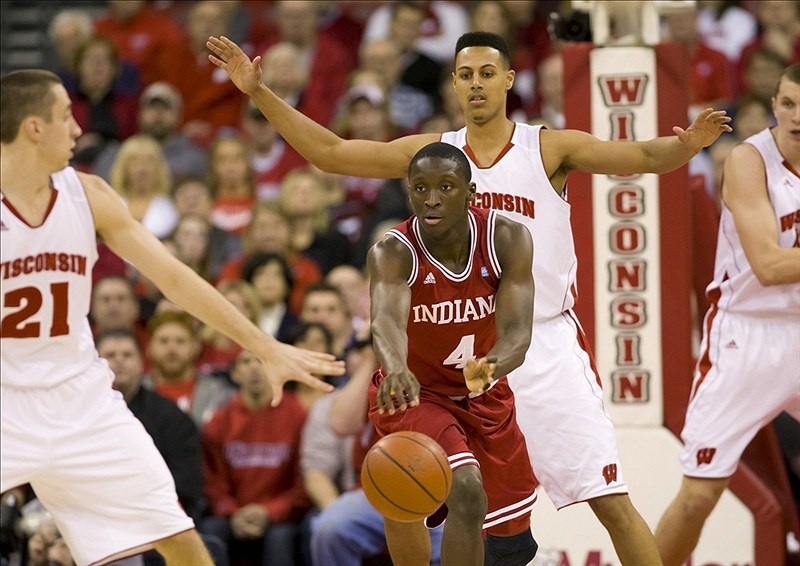 Ryan Evans scored 12 points and grabbed 10 rebounds to lead No. 25 Wisconsin to a 57-50 upset win over No. 17 Indiana on Thursday. Earlier in the night, Nebraska beat Iowa at Iowa City. Dive into the post for more details on both games.

FINAL: Brandon Richardson scored 25 points, grabbed six rebounds and handed out three assists as Nebraska defeated Iowa 79-73 on Thursday at Carver-Hawkeye Arena in Iowa City. Nebraska (11-9) was trailing when Richardson converted a field goal with 4:27 to go to give it a lead it would not relinquish. The Cornhuskers shot 52 percent from the field (27-of-52). Nebraska shot 18-of-24 from the free throw line. The Cornhuskers were tough on the offensive boards, grabbing 10. Nebraska also got a solid contribution from Bo Spencer, who scored 16. Zach McCabe scored 19 points, hauled in five rebounds, and made 8-of-10 shots from the floor for Iowa (11-10) in the game. The Hawkeyes hit 50 percent of their field goals (27-of-54). Iowa also got double-digit performances from Aaron White, who scored 10, Matt Gatens, who scored 12, and Roy Devyn Marble, who scored 15.

HALFTIME: Iowa leads 38-31 over Nebraska at the half thanks to a nice start from Zach McCabe, who has 12 points on 5-7 shooting. The game was tied 19-19 before the Cornhuskers went into a funk, going the next 3:37 without scoring, and allowing the Hawkeyes to take a 27-19 lead in the first. Nebraska put the clamps on Iowa's three-point game (3-of-10, 30 percent from long range), while the Hawkeyes shot 67 percent in the first half on two-point field goals. Eight Iowa players scored in the first half. The Cornhuskers have been effective inside, making 10-of-15 two-point field goals, but Nebraska has struggled on the perimeter, shooting 2-for-9 from three-point range. Brandon Richardson led the way for the Cornhuskers in the first half, with 10 points and three rebounds.

FINAL: Ryan Evans scored 12 points and grabbed 10 rebounds to lead No. 25 Wisconsin to a 57-50 upset win over No. 17 Indiana on Thursday at the Kohl Center in Madison. The teams traded the lead 10 times in the game. Mike Bruesewitz shot 3-of-5 from the field and scored 10 points for Wisconsin (17-5). Other Wisconsin scorers in double figures included Jordan Taylor, who scored 10 and Ben Brust, who scored 13. Verdell Jones III scored 12 points, had three assists, and knocked down 6-of-10 shot attempts for Indiana (16-5) in a losing effort. Christian Watford was 4-of-6 from the floor and chipped in 12 points for the Hoosiers. Not only did the Badgers go to the line nine more times than did Indiana, they made the most of their opportunities, converting 15-of-19. The Hoosiers committed 17 fouls and made 5-of-10 free throw attempts. With the win, Wisconsin extends its winning streak to five games.

HALFTIME: A close first half that saw the lead being switched seven times ended with No. 17 Indiana taking a 27-25 lead over No. 25 Wisconsin. Trailing 9-4, the Hoosiers used an 11-0 run to blow past the Badgers and take a six-point lead. Indiana's leading scorer, Cody Zeller, has been shut down thus far. Sitting with zero points, the freshman is far below his 15.1 per game average this year. Mike Bruesewitz is putting together a nice game so far for Wisconsin. The junior has four points and three rebounds. Verdell Jones III led the way for the Hoosiers in the first half, with 12 points.