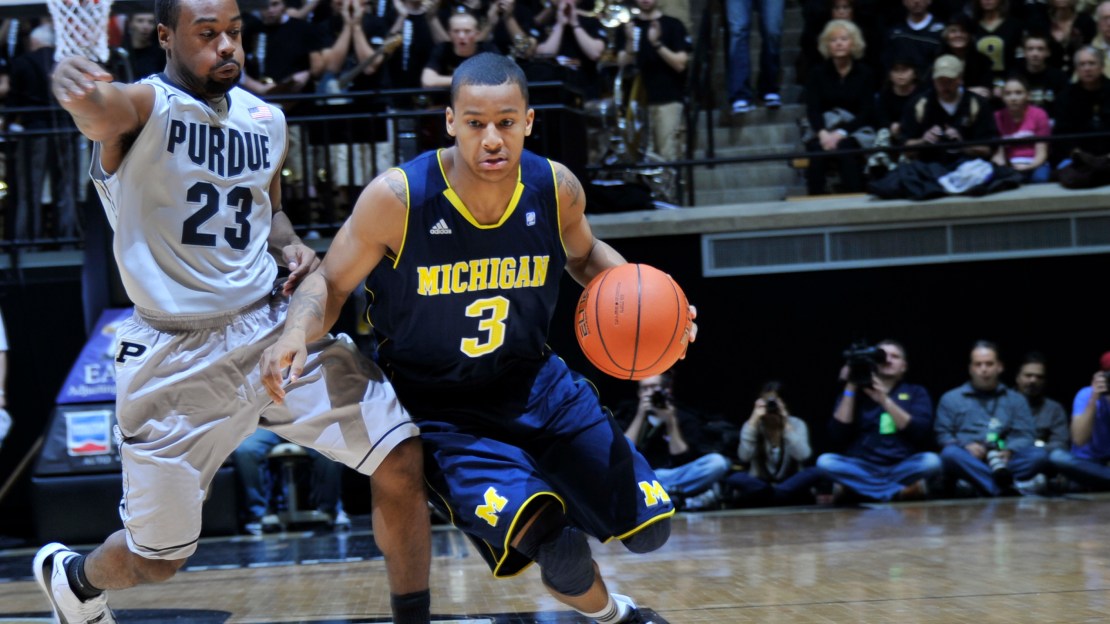 (AP) Tim Hardaway Jr. scored 19 points to help No. 20 Michigan defeat Purdue 66-64 on Tuesday night. Jordan Morgan had 12 points and seven rebounds, Stu Douglass scored 12 points and Evan Smotrycz added 10 points for the Wolverines (16-5, 6-2), who entered the game in a tie for first place in the Big Ten. Michigan shot 54 percent from the field and outrebounded the Boilermakers 30-23. Lewis Jackson scored 17 points and Robbie Hummel added 16 for the Boilermakers (14-7, 4-4). Read the full AP recap and see the box score.

Check out our half-by-half recap, powered by Narrative Science:

FINAL:No. 22 Michigan took the lead with 1:32 to go on a field goal by Jordan Morgan and hung on for a 66-64 win over Purdue on Tuesday at Mackey Arena in West Lafayette. There were 10 lead changes, as neither team could take control of the game. Even in defeat, Lewis Jackson came through for Purdue (14-7) with 17 points, eight assists, and 6-of-9 shooting from the field. Morgan sparked Michigan (16-5), as he scored 12 points, pulled down seven rebounds, and went 5-of-7 from the field for the Wolverines in the game. Michigan shot 54 percent from the field (27-of-50). More Michigan scoring came from Evan Smotrycz, who scored 10, Stu Douglass, who scored 12, and Tim Hardaway Jr., who scored 19. The Boilermakers made the extra pass all game long, tallying 16 assists on 23 baskets. Purdue also got a double-digit contribution from Robbie Hummel, who scored 16. Winning the rebounding battle was a key to victory for the Wolverines as they outrebounded the Boilermakers 30-22.

HALFTIME: No. 22 Michigan is on top 30-28 at halftime after outrebounding Purdue 18-11 in the first half. The Wolverines trailed 5-4 when they broke out for a 10-0 run to overtake the Boilermakers and seize a nine-point lead. Purdue moved the ball in the first half, accounting for eight assists on 11 field goals. Purdue got points from seven different players. Seven Michigan players have scored. The Boilermakers' Lewis Jackson had a big first half, with six points and six assists. Stu Douglass is putting together a nice game so far for Michigan. The senior has seven points, four rebounds, and three assists.