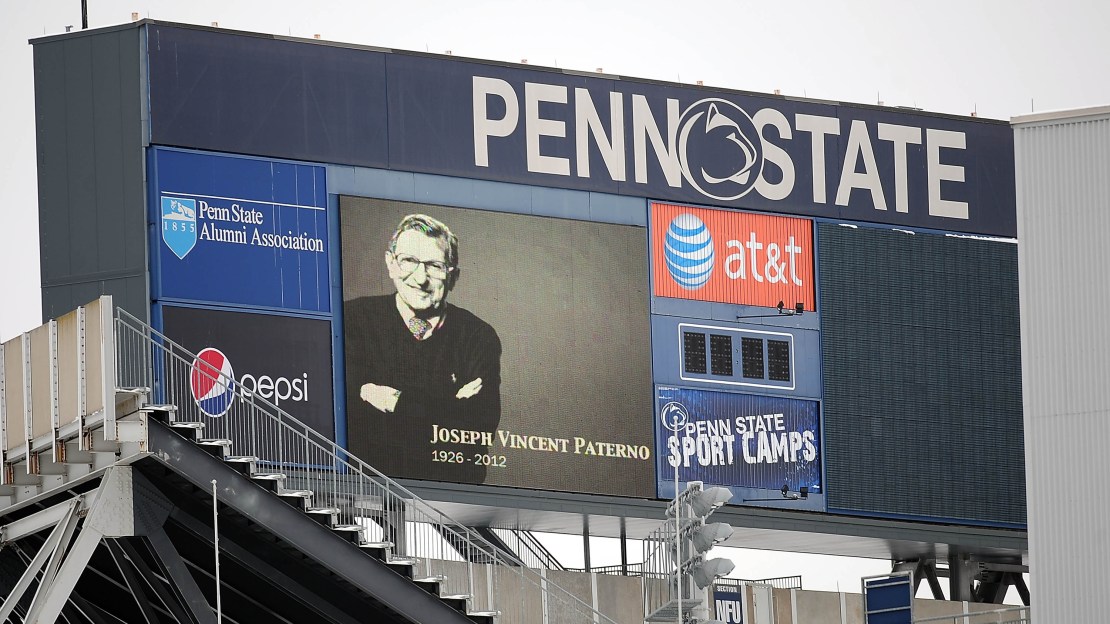 Former Penn State coach Joe Paterno, who was battling lung cancer, died Sunday morning. He was 85. Mount Nittany Medical Center said the cause of death was a spreading lung cancer (read the AP story). The legendary Penn State coach and the all-time winningest college football coach was diagnosed with the cancer in November, days after getting ousted as head coach in the aftermath of the child sex abuse charges against former assistant Jerry Sandusky.

Right now, read BTN.com's Tom Dienhart column, leave your comments on our Facebook page or on this special condolences post, look at some photos from memorials, and watch a rich collection of archive BTN video coverage of Paterno from his coaching days at the bottom of this post.

His family released a statement Sunday morning to announce his death.

"He died as he lived," the statement said. "He fought hard until the end, stayed positive, thought only of others and constantly reminded everyone of how blessed his life had been. His ambitions were far reaching, but he never believed he had to leave this Happy Valley to achieve them. He was a man devoted to his family, his university, his players and his community." Read the full release.

Head coach of the Nittany Lions since 1966, Joe and his wife Sue Paterno have five children, all of whom are Penn State graduates, and 17 grandchildren.

With great sadness we mourn the passing of Coach Joe Paterno…Few have done more. http://t.co/XMsQYadF

Paterno was dismissed by the university last fall, and recently the school announced the hiring of his replacement, Bill O'Brien. The school's board of trustees recently explained they decided to oust Joe Paterno in part because the football coach didn't meet a moral obligation to do more to alert authorities about a child sex abuse allegation against a retired assistant coach.

In a statement released Sunday, Penn State President Rodney Erickson says the university is grieving the death of legendary former football coach Joe Paterno and plans to honor him for his contributions to the school.

Paterno had given an exclusive interview to the Washington Post recently. Post reporter Sally Jenkins painted a portrait of a frail Paterno, but  the 85-year-old Paterno, the winningest coach in Division I football, refused to bash the school or say a bad word about retired defensive coordinator Jerry Sandusky, the man at the center of the turmoil who is accused of sexually abusing children. Read the full Washington Post story here.

More links: USAToday has a rich timeline of Joe Paterno's career here. There are more interesting photos over at The Daily Beast. Here's a story from GoPSUFootball.com too, as well as a statement from current Penn State football coach Bill O'Brien. The New York Times has also posted a detail obituary, and the last line is a quote from Paterno himself: "With the benefit of hindsight, I wish I had done more.?

BTN has covered Paterno since the TV network started. In this video essay below, BTN's Dave Revsine looks back at the legacy.

This past season BTN looked back at the year that saw Paterno capture his 324th coaching victory, surpassing Bear Bryant for all-time wins in major college football. Watch the clip below.

As he did each season, Paterno appeared at the Penn State pep rally on the eve of the football team's opening game against Indiana State.

Look back at Paterno's record-breaking win this past season. For more on Paterno, go to his profile page at GOPSUSports.com.

Wire services contributed to this report.