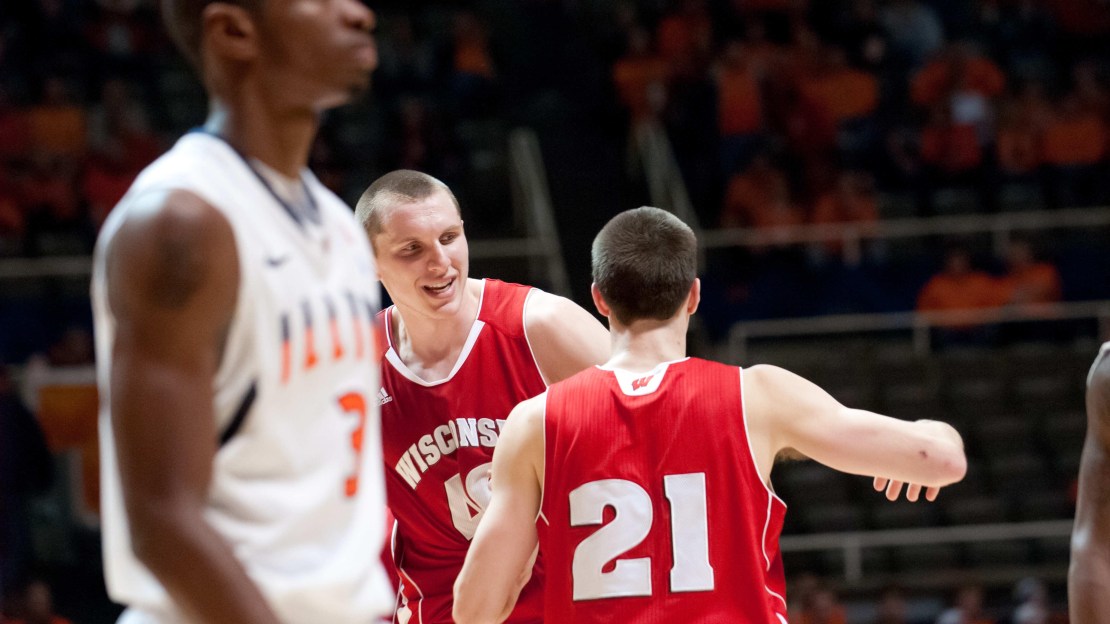 CHAMPAIGN, Ill. — January is about to melt into February. Winter has set in, but spring isn?t that far out of sight. And neither is the NCAA tourney. Wisconsin knows that. So does Illinois. That?s what made today?s game so huge, as a topsy-turvy Big Ten races was about to take another step toward perhaps making some sense. Or, maybe not.

Who?s the best team? Ohio State? Michigan State? On this day, Wisconsin made a statement that perhaps it should be included in the discussion following an impressive 67-63 win over the Illini.

This is a Badger team many doubted just a few weeks ago, when it lost three games in a row (Iowa, Michigan State, at Michigan) with two of the defeats coming at home at the Badgers? Kohl Center fortress. That made Wisconsin 1-3 in the Big Ten as it headed to Purdue?s Mackey Arena, where it had one just two times ? ever.

The Badgers won 67-62 in what may end up being a season-defining victory, and followed that with home triumphs over Nebraska and Northwestern. Now, this, a big win at Illinois that validates the Badgers as an elite team in the nation?s elite conference. It?s four victories in a row for a Wisconsin team that continues to define itself and gain confidence.

?Basketball is a grind,? said Badger coach Bo Ryan, who has the best all-time winning percentage in conference games (70.9) of any coach in Big Ten annals.

And grind is exactly what Wisconsin did on this cold afternoon in central Illinois before the first Assembly Hall sellout crowd of the season.

It was a back-and-forth game that featured 11 lead changes and eight ties. Illinois took its last lead at 50-48 with 8:32 left. That?s when the Badgers began to assert their will and assume command, outscoring Illinois 14-9 down the stretch.

With 1:05 left and trailing Wisconsin, 60-57, Illinois needed to come up with a big stop to stay in the game. But that?s when star Badger guard Jordan Taylor drove and drained a 15-footer to basically ice game. That?s why many feel the senior is the top point guard in the nation.

?We just try to run the same stuff that we run in practice,? Taylor said. ?Just trying to knock down shots.

?This is a tough place to play. The fans are loud. But we play with aggression.?

The Badgers also played with their hallmark defensive intensity. A big key: shutting down Illini guard Brandon Paul. The last time on this court, Paul played out of his mind by notching 43 points that included some impossibly long 3-point shots. He was triumphantly carried off the court as Assembly Hall erupted in celebration following a huge 79-74 win over No. 5 Ohio State that had the Illini thinking big.

But this afternoon, Paul hit just 3-of-11 shots and missed both of his 3-points en route to scoring 10 points. Credit Badger guard Josh Gasser. But, again, great defense always is a calling card for the Badgers under Ryan. They entered today yielding an NCAA-best 49.0 points per game and also pace the nation in opposing field-goal percentage (35.4 percent).

?Josh came in and did outstanding job on Brandon? said Taylor, who led the Badgers with 19 points as Wisconsin won for the fourth time in its last six trips to Assembly Hall.

Another key was the fact Wisconsin (16-5 overall; 5-3 Big Ten) got 14 points from its bench, while Illinois got none. And the Badgers also shot well from 3-point range, nailing 9-of-22 from long range (40.9 percent). And all season, that has been key for the Wisconsin. Shoot well from long distance, and win. Big man Jared Berggren led the way by draining 3-of-6 3-pointers on the way to 18 points.

What?s next for Illinois (15-5; 4-3)? No doubt, this is a crossroads moment. The Illini began Big Ten play 4-1 and were all alone in first place just a few days ago. But that monster win over Ohio State was followed by a dreadful 54-52 loss at Penn State ? and now, this.

?You have to give credit to Wisconsin,? said Illinois coach Bruce Weber, whose team saw its 14-game home winning streak end as Illinois also suffered consecutive losses for the first time this season. ?Wisconsin lost three in a row, now they have won four. You have to come back. A lot can happen. For now, we have to worry about getting better.?

Yes, Illinois is just one game out of first place, but in some respects, it seems like more. The Fighting Illini won?t play again until Saturday, when they travel to suddenly hot and dangerous Minnesota. That?s followed by back-to-back home games vs. Michigan State and Northwestern before trips to Indiana and Michigan.

Which direction will Illinois go? No doubt, it?s time for juniors Paul and D.J. Richardson to step up and lead. And pivot man Meyers Leonard needs to develop more low-post moves and be more assertive and aggressive, showing promise today in registering his sixth career double-double with a team-high 16 points and 11 rebounds.

Wisconsin will be back in action on Thursday at home vs. Indiana, another great opportunity to build its resume vs. a Hoosier team that has to be filled with some doubt despite ending a three-game losing skein today with win a home win vs. Penn State. After the Hoosiers, Wisconsin plays at Penn State and then comes home for a huge game vs. Ohio State on February 4. Ryan knows what his Badgers have to do to be successful.

?Hustle plays,? he said. ?Those were big today. We have to do those things to be successful. We don?t strike fear into many teams (with our talent).?

?This is a different group of guys and personalities,? said Taylor. ?Fun guys. We are coming together when it counts.?