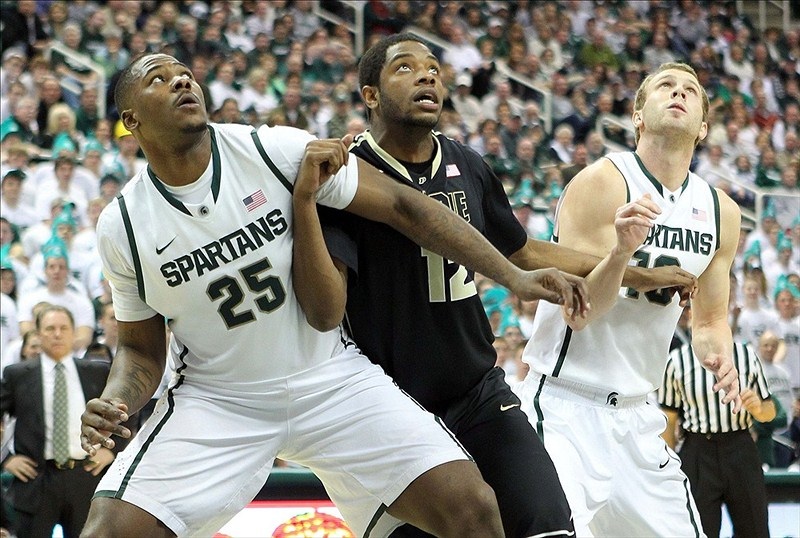 Ohio State beat Nebraska 79-45 on Saturday night. In the other games, Michigan lost at Arkansas while Michigan State used its efficient offense to power past Purdue 83-58 on Saturday in East Lansing. Michigan State (16-4) shot 60 percent from the field (30-of-50). Draymond Green picked up the Spartans with eight points, 12 rebounds, and seven assists. We put in-game updates and other links in this post.

FINAL: No. 6 Ohio State used stingy defense to defeat Nebraska 79-45 on Saturday at Bob Devaney Sports Center in Lincoln. Nebraska (10-9) was held well below the 61.6 points per game it came in averaging on the season. Ohio State (17-3) held the Cornhuskers to 30 percent shooting from the field and hauled in 21 defensive boards, while only allowing 10 offensive rebounds. Deshaun Thomas boosted the Buckeyes, with 14 points, six rebounds, and 5-of-9 shooting from the field. Ohio State shot 8-of-21 from three-point range during the game, good for 38 percent. The Buckeyes went 19-of-29 from the charity stripe as a team (66 percent). More Ohio State scoring came from Jared Sullinger, who scored 14 and William Buford, who scored 15. Brandon Ubel had eight points, hauled in eight rebounds, and shot 2-of-3 from the field for Nebraska in a losing effort. The Cornhuskers shot 16-of-23 from the free throw line. Nebraska had eight assists on 13 baskets.

HALFTIME: No. 6 Ohio State leads 36-20 at halftime after it put a stranglehold on Nebraska's offense in the first half. The Cornhuskers trailed 24-18 before allowing the Buckeyes to go on a 12-2 run to close the half. Each team took a turn in the driver's seat as the lead changed hands five times. Ohio State trailed 8-5 when it broke out for a 13-0 run to overtake Nebraska and seize a 18-8 lead. The Cornhuskers goes into the break with the offensive rebounding advantage, with nine to the Buckeyes' two. Ohio State shared the ball, finishing with eight assists on 12 field goals in the first half. Brandon Ubel led the way for Nebraska in the first half, with six points and five rebounds. The Buckeyes' Deshaun Thomas had a big first half, with 10 points and three rebounds.

FINAL: Arkansas took home a victory, 66-64 over No. 19 Michigan in an upset on Saturday, despite being without the services of Marshawn Powell, who is averaging 19.5 points per game this season. Zack Novak was a bright spot for Michigan (15-5) in the loss with 17 points, eight rebounds, 6-of-9 shooting from the field, and 5-of-7 shooting from beyond the arc. Arkansas (14-5) broke out to an early 12-point lead after a 17-5 run in the first. Hunter Mickelson ended the run with a field goal, which helped the Razorbacks hold a 46-33 advantage at halftime. B.J. Young sparked the Razorbacks, as he scored 15 points, grabbed four rebounds, handed out three assists, and made 6-of-10 shots from the floor in the victory.

Mickelson had a quality shooting game, nailing 5-of-6 shots from the field and scoring 11 points. Arkansas hit 50 percent of its field goals (24-of-48). The Razorbacks also got double-digit efforts from Rickey Scott, who scored 11 and Mardracus Wade, who scored 12. The Wolverines made the extra pass all game long, tallying 15 assists on 25 baskets. Michigan also got double-digit contributions from Trey Burke, who scored 13 and Jordan Morgan, who scored 16. Arkansas never trailed in the game. The Razorbacks' largest lead was 20, which came with 6:27 to go in the first half. Arkansas went to the line 14 more times than the Wolverines and made the most of its opportunities, shooting 13-of-21. Michigan committed 17 fouls and shot 6-of-7 from the line.

HALFTIME: B.J. Young and Rickey Scott have teamed up to give Arkansas a 46-33 lead over No. 19 Michigan. Young scored 11 points and shot 4-of-6 from the field. Scott scored eight points, grabbed three rebounds, and shot 3-of-4 from the field. The Razorbacks didn't trail once in the first half and they also led by as many as 20 points. Eight Arkansas players scored in the half. The Wolverines demonstrated their offensive efficiency by racking up seven assists on 11 baskets. Zack Novak led the way for Michigan in the first half, with nine points and three rebounds.

FINAL: With the game tied 20-20 the Spartans unleashed an 18-4 flurry to take a 14-point advantage with 17:26 in the game. Branden Dawson had a quality shooting game, nailing 6-of-7 shots from the field and scoring 14 points. Michigan State also got double-digit games from Keith Appling, who scored 10, Austin Thornton, who scored 11, and Derrick Nix, who scored 12. Lewis Jackson scored 10 points, hauled in six rebounds, and handed out four assists for Purdue (14-6) in the loss. The Boilermakers shot just 29 percent from the field (18-of-62). More Purdue scoring came from John Hart, who scored 10. Both teams grabbed 32 rebounds in the game.

Purdue had an interesting night and morning before today's game. Purdue didn't arrive in East Lansing until about two hours before today's noon game against Michigan State, as the Boilermakers travel party experienced a flight cancellation Friday that eventually led to a five-hour road trip from West Lafayette by bus this morning. More at Mlive.com

HALFTIME: Neither No. 9 Michigan State's Draymond Green nor Purdue's Robbie Hummel have been able to get going, but the Spartans lead 31-24 at the half. Both teams have been able to control the opposition's leading scorer. Michigan State's Green and the Boilermakers' Hummel have both been held in check during the first half. Green has two points and Hummel has scored two. Both teams took turns controlling the momentum as there were five lead changes.