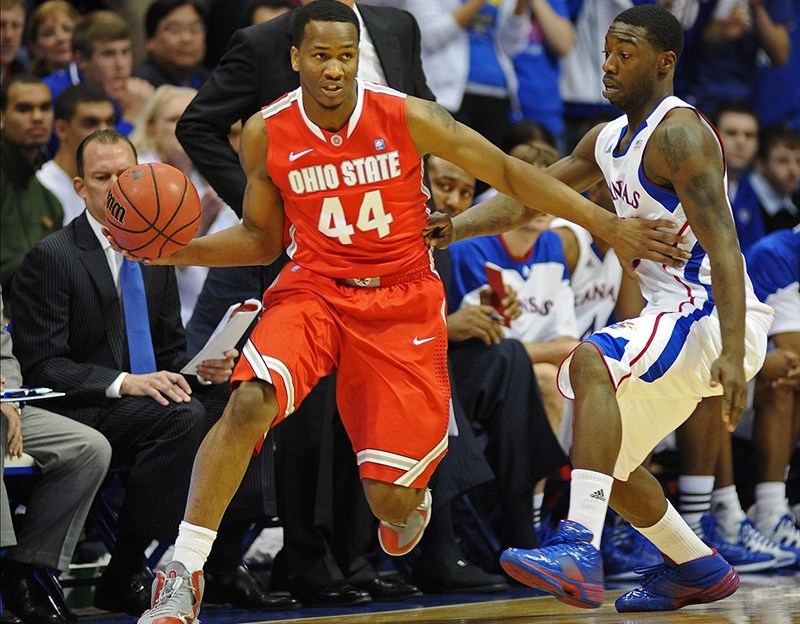 Expectations are big at Ohio State. And William Buford and the Buckeyes aren?t running away from them. It?s Final Four or bust for the Buckeyes. Why not? This team is loaded with talent, including Jared Sullinger, Aaron Craft, Deshaun Thomas, among others.

And then there?s Buford, the lone senior on the squad. The 6-6 guard is the one teammates look to for leadership with players like Dallas Lauderdale, Jon Diebler and David Lighty gone from last year?s team that entered the NCAA tourney as the No. 1 overall seed. Alas, the season ended with a loss to Kentucky in the Sweet 16.

With a 16-3 overall mark and 4-2 Big Ten slate, Ohio State is steamrolling toward another big season and likely lofty seed in the Big Dance. And Buford is a big reason why. He?s averaging 15.2 points, 4.6 rebounds and 3.5 assists for a team that lost at Kansas by a point with Sullinger out of the lineup; at Indiana by four points; at Illinois by five points.

Buford is looking to fight out of a funk that has seen him hit just 24-of-62 shots (38.7 percent) over the past five games and get to the free-throw line just five times en route to averaging 9.2 points. Coincidentally, in that span, Ohio State is 3-2.
BTN.com caught up with Buford as he and Buckeyes prepared for a trip to Nebraska on January 21.

Q: You are the team?s lone senior. What?s that like?
A: It has been pretty decent. We had our ups and downs. Hopefully we are done with the downs. We are just trying to continue to get better every day and be better than we were yesterday.

Q: Do the young guys look to you for advice?
A: Yes, sometimes. I?ve been here a while and been through probably all they have been through. I?m just trying to help them the best I can on and off the court.

Q: How is this year?s team different than last year?s squad?
A: The biggest thing is maturity. But we have just as much talent or maybe more on this team. We just have to learn how to use it and stay together. There are times when we really need to be together in big games. Last year, I think we had that. We were always together for 40 minutes on the floor.

Q: You?ve lost three pretty big leaders off last year?s team. Has that been a big void to fill?
A: Yes, absolutely. You never can replace Dallas, Jon and Dave. Those were three hard-working guys and they always were the leader on the floor in practice and off the court, too.

Q: Are you surprised to have three losses already?
A: Absolutely. I think they were a building block for us and helped us out. But we would love to be undefeated now. But unfortunately that hasn?t happened and we are learning from our losses and hopefully those things don?t happen again.

Q: Why do you think you have lost those games?
A: Probably maturity and togetherness, and trying to value every possession.

Q: Is it difficult to deal with the weight of big expectations?
A: To be honest, the team, we don?t really think about it. We just go out there and play and listen to our coaches and try to follow the game plan. We don?t listen to what people on the outside have to say. We just do what we need to do to try to win.

Q: Are you still motivated by that loss in the NCAA tourney last year to Kentucky?
A: Absolutely. I?m always motivated. This is something I love to do so, so I?m always motivated to get better every day. I?m kinda going through a slump right now but I?ve just been in the gym, keep working on my game and hopefully I?ll get out of it soon.

Q: How big was that win over Indiana last Sunday?
A: That was a real big win for us. We were ready to play from the beginning. We lost in their house. We didn?t want to lose here. You have to protect home court. We knew they were a good team and were gonna give us their best. But we wanted to come out and be the aggressor.

Q: What have you thought of this crazy Big Ten race?
A: The Big Ten is a good conference this year. It?s not gonna be an easy run for anyone. We just focus on taking one game at a time and hopefully just win it out the rest of the season.

Q: How has Jared Sullinger?s game been different this season compared to last season?
A: It?s wonderful playing with him. He?s one of the best big men in the country. As far as his game, it has improved tremendously. His footwork, he?s stepping out and shooting jumpers-mid-range, threes. He can pass out of the post when he?s being double-teamed. He draws so much attention down there that it makes it easier for us guards.

Q: What?s the goal for this team? Is it the Final Four?
A: Ultimately, yes, that?s always the final goal. But we are just taking it one game at a time and worry about the Big Ten right now.