The Journey: Go Inside One Heated Big Ten Rivalry 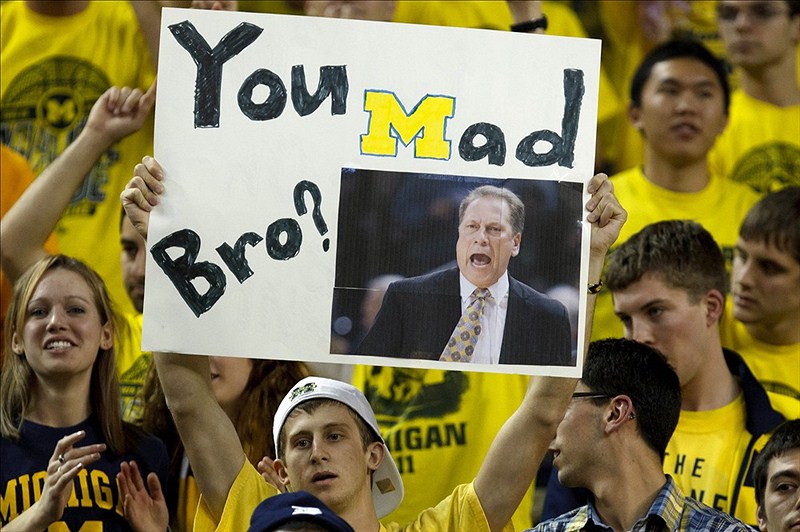 The third episode of "The Journey: Big Ten Basketball 2012" airs in its regular spot on TV on Sunday night at 8 p.m. ET but it will debut Saturday night too immediately after the 8 p.m. ET men's basketball game between Ohio State and Nebraska.

In the bonus clip from "The Journey" in this post, Minnesota?s Rodney Williams talks about his first dunk, and our TV episode will get into how Williams has gone from being a dunker to complete player (see his dunks here including this 360-degree one). We spoke once again with Julian Darnell, a BTN senior features producer who works on ?The Journey: Big Ten Basketball 2012.? Want to see what else is on the show? Dive into the post.

This week find out what makes the the Michigan State/Michigan rivalry so passionate and go behind the scenes of Tuesday's big game.  Also, catch up with Ohio State?s William Buford and Northwestern?s David Sobolewski.

BTN.com: It's always fun to ask this question: What's on "The Journey" this week?

Darnell: Michigan-Michigan State was a chance I had to work this week. The chance to experience it close up is pretty exciting. There is nothing like good rivalry games, especially in college basketball. Everyone talks about Duke-North Carolina but don't sleep on Michigan-Michigan State. They don't like each other in any sport, and it doesn't matter if it's football, basketball or -.

BTN.com: What did you see and capture for the show on this past Tuesday that illustrated that rivalry?

Darnell: Just the way both teams competed. The way both teams cared so much. And you see on he leaders from each squad. You see it and hear it with Draymond Green, we saw that in his press conferences. And you hear i with Zack Novak. These guys care. And they get everybody else to care. "We don't want to lose to these guys." That's the message.

I also wanted to look at Trey Burke in this game. He's from Columbus and he's new to this rivalry, and he is just fearless. It was a fun game to watch and to hear. Coach (Tom) Izzo at his press conference on Monday was just great. The whole atmosphere was amazing, and we show that.

BTN.com: These rivalry games are great places for "The Journey" to explore, right? It just gives you so much to dive into.

Darnell: It doesn't hurt. What Michigan accomplished last year by weeping Michigan State had not been done for a long time. To me, the most fun is when we hear from some of the older players. Cazzie Russell was speaking on one side and talking about how important it is to the state. And he mentions football, because football recently has been the other way. Michigan State has owned Michigan. And Cazzie made sure to reference that. And then we talk to Mateen Cleaves – who is a Spartan until the day he dies – is from Flint, Michigan and he learned about the rivalry, too.

BTN.com: Gives us a glimpse at what else in in this week's show. I heard we spoke with Rodney Williams.

Darnell: He's the best game dunker in our conference. We of course get a chance to see his great dunks, and especially his favorite dunk, the 360-degree one (see video below). It's the hammer with a lot of power and the fans go crazy. But we also find out that he's more than a dunker. He's had to play a stronger role with Trevor Mbakwe out injured. He's had to play the four position. He's an exceptional athlete. When (Minnsota coach) Tubby Smith says, "He's the best athlete that I've ever had," that speaks volumes because Smith coach Tayshaun Prince and Rajon Rondo, and others. That gets your attention.

BTN.com: And what will the viewer learn in the segments on Ohio State's William Buford and Northwestern?s David Sobolewski.

Darnell: Sobolewski's got some big shoes to fill with Juice Thompson gone. Thompson left an imprint there and Sobolewski has come in to become "The Point Guard." So we talked with him a little bit about that. He worked out with Juice during the off-season, even. An we talked to Buford, who is interesting. He's been there for all of the eras with David Lighty and Evan Turner, and now with Jared Sullinger. He took that last shot in New Jersey (during last year's elimination loss to Kentucky in the NCAA Tournament) and missed and that had to be tough. Bu he's back and moving up the charts in Ohio State history, so we take a look at how he's really rebounded.