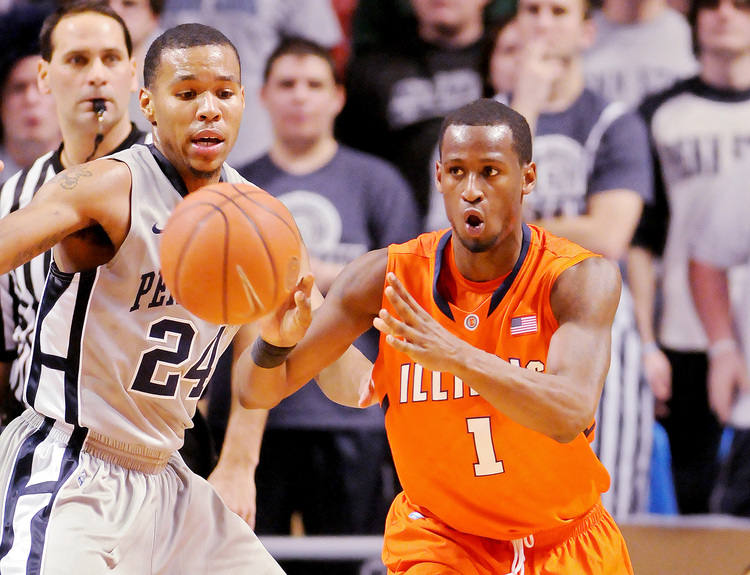 After a long break in which it moved into first place, Illinois saw its offense lay an egg in a losing effort at Penn State. It was clear that, despite the rousing win over Ohio State, this is still the same Illinois team we've watched all season. Let's again roll out what we'll have to start calling the Illini table:

We've seen this before, with Bruce Weber's team coming out of the gates strong, following that up with some of the worst offense possible, and snapping out of it for a strong finish. For comparison to past examples, refer to our previous post on the broken Illinois offense. This Jekyll-and-Hyde personality finally caught up with the Illini, and they weren't able to do to Penn State what they did to Cornell and St. Bonaventure.

I've seen comments to the effect that this is what Illinois looks like when Brandon Paul isn't going off, but it should be noted that Paul actually played quite well, scoring 20 points on 11 shots in a slow 56 possession game. The rest of his team scored only 32 points on 38 shots. In conference play, Paul is the B1G's leading scorer with 20.3 points per game, so maybe our Kemba Walker comparison wasn't as insane as it once seemed.

Penn State deserves credit for playing hard and well with a shorthanded roster–regulars Billy Oliver and Trey Lewis were out. Cammeron Woodyard scored 17 points on 10 shots, and Tim Frazier posted nine assists and 12 points, including the game winner.

Wednesday night saw a similarly bad road performance from Indiana as they lost at Nebraska. The Hoosiers played fairly well most of the second half, and they held an 11-point lead with six and a half minutes remaining. With a chance to put the game away, Indiana got sloppy. The Hoosiers went scoreless on the next four trips, including three turnovers, and suddenly it was a one possession game with a rowdy crowd behind the Huskers. As we always say, anything can happen in a one possession game, and Nebraska did just enough to pull out the win.

The Indiana meltdown was inexplicable. Check out how the game changed over the final 12 possessions:

It's hard to explain what happened. The Hoosiers seemed to abandon their offense as the second half wore on. Most of their shots were forced off of one or zero passes. There was a three-on-one fast break that resulted in a missed three. Even the game's final possession, which came after a timeout in which Tom Crean presumably discussed the plan, resulted in a whirling dervish layup attempt into the bottom of the rim from Jordan Hulls–hardly the best shot you could get from the personnel at Crean's disposal.

Indiana has now lost three straight games and has an in-conference efficiency margin of -0.05. That's better than last season's -0.11 margin, but it's a far cry from the elevated expectations these Hoosiers garnered after an unbeaten nonconference slate. The problem continues to be on the defensive end–Nebraska had scored just 0.84 points per trip in B1G play, and Indiana allowed that bad offense to score 1.02 points per possession.

In Madison, Wisconsin got its offense back on track in a big way with a 20-point spanking of Northwestern. Sure, the Wildcats normally play permissive defense, but 1.29 points per trip is the most they've surrendered all season. Paired with the nice performance at Purdue, it's starting to look like the Badgers are remembering how to shoot. That would be bad news for the rest of the conference, as the Wisconsin defense has remained quite good through their struggles. This was clear in the second half, as Northwestern just couldn't get good looks.

Jordan Taylor was a big part of the second half beatdown, as he scored 12 of his 15 points after the break. Taylor is showing signs of playing more like his old self–over the past three games, the senior guard has 11 assists to one turnover and has posted an effective field goal percentage of 52 percent. Ryan Evans also had a big second half, scoring 15 of his 17 points and breaking out of a personal funk.

Northwestern was simply overmatched in the second half, and it should be noted that Bill Carmody had just seven scholarship players at his disposal. This isn't a devastating loss for the Wildcats–I still expect the Kohl Center to be a very difficult place to win for anybody. Northwestern needs to quickly shift its focus to Sunday's big visit to Minnesota.

If one thing is abundantly clear, it's that winning on the road in the Big Ten is hard. With this in mind, the weekend's most interesting games figure to be:

These games will all be on BTN. With half the conference either tied for first or within one game of the lead, any road win is a big win. We'll see who is able to grab one this weekend.