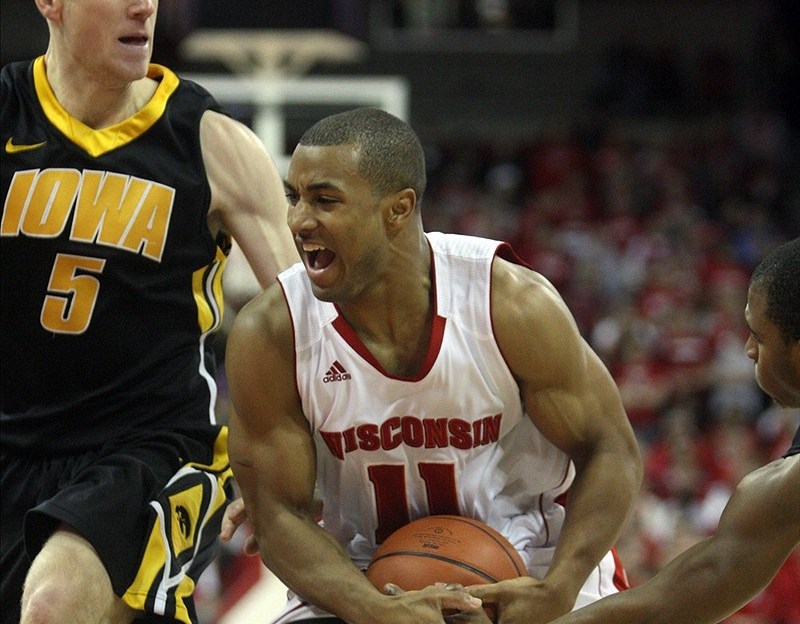 Crazy. There?s no other way to describe what has been a topsy-turvy Big Ten chase this season, and Wisconsin point guard Jordan Taylor has lived it. His Badgers entered the season with high hopes but struggled through a three-game losing skid from Dec. 31 to Jan. 8 that included two losses on Wisconsin?s home court, a rarity.

But the 6-1 senior has helped the Badgers (14-5 overall/3-3 Big Ten) get back on track with consecutive wins, beginning with a huge victory at Purdue last Thursday that was Wisconsin?s third ever in Mackey Arena. That was followed by a home win over Nebraska. Taylor averaged 15.5 points, 2.5 rebounds and 5.5 assists in the wins and now has scored in double figures in each of his last nine games.

Now comes a big game against Northwestern tonight followed by a trip to Illinois on Sunday (full scoreboard here). BTN.com caught up with Taylor as he prepped for the week.

Q: Why do you think the offense has been stagnant at times?
A: With a young team, sometimes shots aren?t falling. Last year we had so much firepower with Keaton, John and Tim. Things just always seemed to flow, and we had a veteran group. Sometimes with younger guys, shot don?t go down, and you might not be as aggressive or look to other guys to score. It?s just matter of staying aggressive as a collective unit.

Q: Have you felt pressure to carry a big offensive load this year with a lot of those great players gone from last year?s team?
A: Not really. We have a lot of scorers on this team. Obviously, we haven?t proven that yet, but we have at times in spurts. We have a lot of guys who can put the ball in the hole. The race is wide open and we have a chance to prove that. We just have to hopefully to get hot here in the next couple games and put a little string together.

Q: What was going through your mind when you were struggling and lost a couple games at home?
A: Iowa and Michigan State are good teams. They came in and outplayed us. We are just trying to win, find any way we could to win the game and win our next game. And we were fortunate enough to go down there and play well at Purdue and get a huge win at a place where a lot teams hadn?t won in the past and probably won?t win in the future.

Q: Was that the highlight to get that win at Purdue last Thursday?
A: It was a big win, but I don?t know if it was the highlight. Every win is big for us. Everyone we can get we take. We don?t take it lightly. But that?s in the past. It?s important for us to try focus on Northwestern. They have a really good team and are coming off a big win of their own and have a lot of momentum going for them.

Q: What do you think of the Northwestern duo of John Shurna and Drew Crawford?
A: They are unbelievable, especially John Shurna. He?s one of those guys you see and you say there?s no way he plays basketball, but he?s one of the best players in the country. He?s an unbelievable player. It?s fun and honor to play against him.

Q: Is there one part of your game that gets overlooked or is underrated?
A: Last year because everyone was focused on Jon (Leuer) so much, there were a lot of open shots to take for me to score. Ever since I was growing up, I loved to pass and find open guys. So I never have really thought of myself as a scorer by nature. But to me, I love to pass the ball.

Q: Any influences for you growing up, guys you wanted to pattern your game after?
A: I really like watching Chauncey Billups growing up, and Chris Paul, as well. Just the way Chauncey led his team and managed his team, he always wasn?t the best scorer but always seemed to have the game under control–when he came to Minnesota for a while (2000-02), that was probably the start of his break out. I was kinda disappointed when they let him go to Detroit.

Q: Who has been the toughest guy for you to guard in the Big Ten?
A: There is a challenge night in and night out. Fortunately it was the same last year with a lot of senior guards, so I have been kinda ready for (all the good guards this year). But everybody is tough to guard.

Q: Is there one venue is the toughest to play in or the loudest?
A: Yes, definitely Mackey Arena or Michigan State.

Q: Bottom line, what is it you guys will have to do to get into contention and win the conference this year?
A: Stay aggressive on offense and continue to defend the way that we have been.