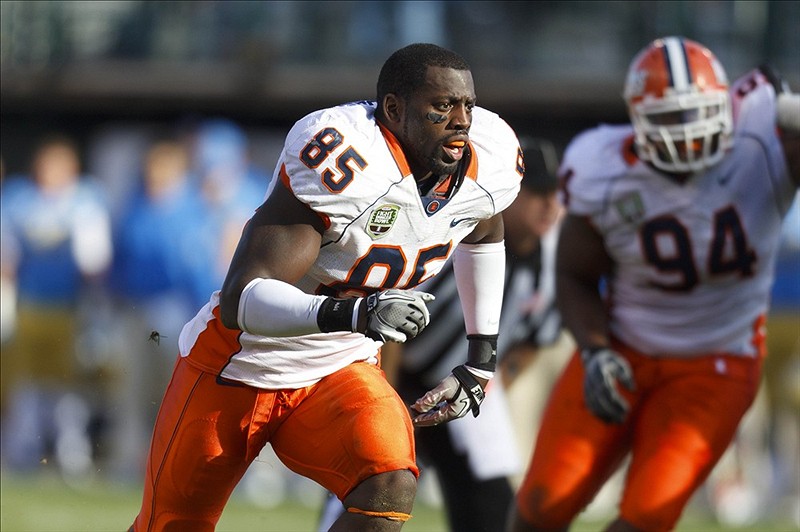 College football players had until Jan. 15 to declare for the NFL Draft, which begins Thursday, April 26 and continues through Saturday, April 28 (get more info at NFL.com). The Big Ten saw five players (Illinois' Whitney Mercilus, Iowa's Riley Reiff, Michigan State's Jerel Worthy and Edwin Baker and Wisconsin's Peter Konz) opt for the pros, so here's my quick look at each one along with some handy links.

NFL.com also has a cool database feature where you can look back at previous NFL Drafts by school. Here are the direct links to the NFL.com pages for Illinois, Indiana, Iowa, Michigan, Michigan State, Minnesota, Nebraska, Northwestern, Ohio State, Penn State, Purdue, and Wisconsin.

Michigan State RB Edwin Baker: Many didn?t envision Baker turning pro, but he may have been crowded out of a loaded Spartan backfield that also features Le?Veon Bell. The 5-9, 210-pound Baker was productive, running for 2,293 career yards with six 100-yard games. He had 665 yards rushing in 2011 with just five catches, losing his job to Bell after dealing with fumbling issues. NFL teams will question Baker?s size. And he?ll have to show he can catch the ball, while also running at least 4.5 for scouts.

Wisconsin C Peter Konz: Scouts fell in love with Konz after watching him move and pull while blocking for some impressive rushing attacks. The 6-5, 313-pound Konz has nimble feet and quick hips, allowing him to get to edge blockers while making 31 career starts. And his athletic ability helps Konz keep his feet; you?ll rarely see him on the ground. He did miss three games in 2011 with an ankle injury but should be ready for workouts.

Illinois DE Whitney Mercilus: The 6-3, 265-pound Mercilus seemingly came out of nowhere in 2011 to emerge as perhaps the top pass-rushing force in the nation en route to leading the country with 16 sacks. He has incredible first-step explosion and athletic ability, often making him a mismatch for stiff linemen. And Mercilus plays like his hair is on fire each down, though he likely will have to transition to outside linebacker in the NFL.

Iowa OT Riley Reiff: Some Hawkeye watchers think the 6-6, 300-pound Reiff is the best blocker Kirk Ferentz has produced, which is saying something for a program that has seen Robert Gallery (2nd overall pick in 2004) and Bryan Bulaga (23rd overall pick in 2010) go high in the draft. Reiff is rangy and athletic, while exceling in pass protection and moving the pile as a run blocker. And he plays with a defensive players? mentality, which NFL scouts love.

Michigan State DT Jerel Worthy: The big fella made the correct call, as interior defensive linemen always are overvalued. Worthy?s combination of size (6-3, 310) and production for the Big Ten?s top total defense (277.4 ypg) and rushing defense (100.5) have him projected by many to be a first-round pick. Worthy almost always demands a double-team and excels at tying up blockers. But some wonder how hard he plays each down.