Watch our 1-on-1 interview with Urban Meyer 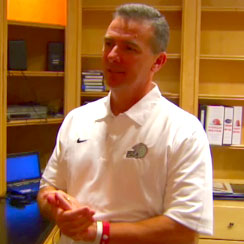 In the interview, the two discuss a number of interesting topics, including why Meyer chose to get back into coaching now. Those who know him say he's taking better care of himself than he did at Florida, as reported recently. Want to look back at the day Meyer was officially introduced as the Buckeyes' coach? Here's the full press conference video, plus some related Meyer posts. Further down in this post we also have BTN's one-on-one interview with Meyer from that day, too.

Watch Meyer give DiNardo a tour of his new office: