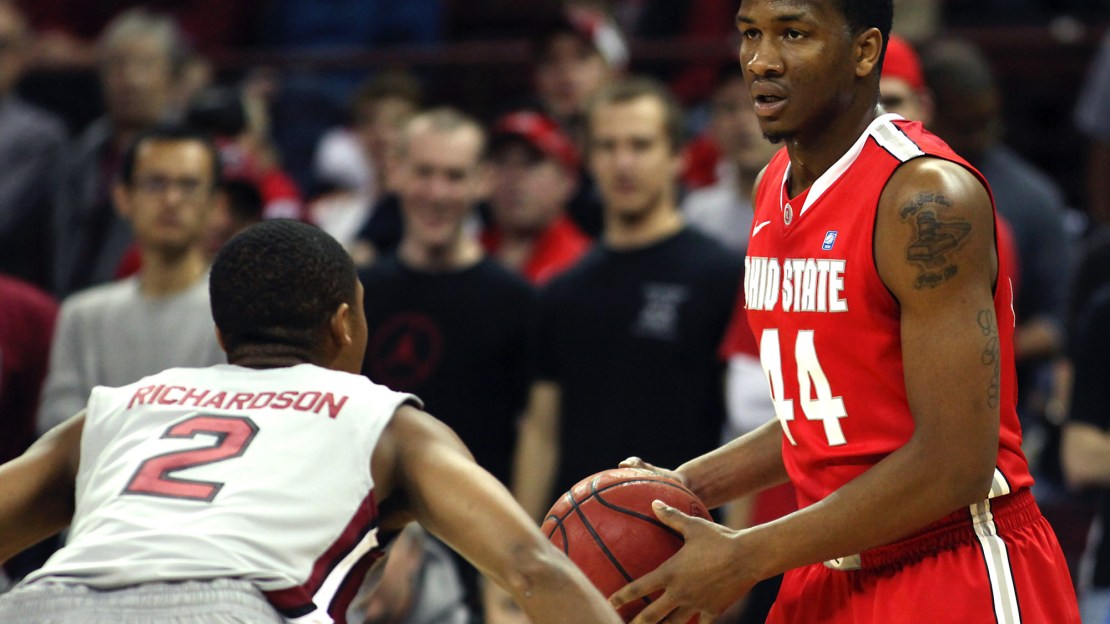 But who is the Big Ten's top guard? See Dienhart's top 15 Big Ten players, plus his next 10, in this post. Also, get ready for Tuesday night's slate of action with our Big Ten scoreboard.

1. Jared Sullinger, C, Ohio State, So. – A man among boys, Sullinger is a lethal combination of talent and effort who never takes a night off. The loss at Illinois seems to have galvanized the big fella, who looked like one of the Big Ten?s best players in a dominating win over Indiana on Sunday.
Key stats: 17.4 ppg; 9.3 rpg; 0.9 apg

2. Draymond Green, F, Michigan State, Sr. – He?s a force down low who can score on the blocks with an array of low-post moves. And Green has extended his game to the 3-point arc to make him an even more dynamic weapon.
Key stats: 15.8 ppg; 10.1 rpg; 3.4 apg

4. Tim Frazier, G, Penn State, Jr. – Is there a more underrated player in the nation? Of course not. Frazier leads the Big Ten in assists and has the ability to get his own shot each time down the court, thanks to a quick first step to the basket. When foes over play Frazier?s dribble, he?s able to pull up for a jumper.
Key stats: 18.1 ppg; 5.4 rpg; 6.7 apg.

6. William Buford, G, Ohio State, Sr. – He?s a force on the wing, running the court. Buford is equally adept at pulling up for a jumper or driving to the basket. He?s also injecting much-needed leadership for this talented Buckeye squad.
Key stats: 15.4 ppg; 4.6 rpg; 3.4 apg

7. Keith Appling, G, Michigan State, So. – The converted off-guard injects the go-go into the Spartan offense with his uncanny quickness and passing aplomb. And in addition to making teammates better, Appling can score in transition or with his shot.
Key stats: 12.9 ppg; 3.4 rpg; 3.8 apg

8. Deshaun Thomas, F, Ohio State, So. – Thomas' game has a lot to like, what with the sweet shot and his ability to get to the basket for easy looks. Thomas also has uncommon strength to go along with his quickness.
Key stats: 15.3 ppg; 4.2 rpg; 0.9 apg

9. Robbie Hummel, F, Purdue, Sr. – Hummel is capable of carrying the Boilermakers but at times may force the action. Why? Because this is a team that lacks myriad scoring options. Still, Hummel is the quintessential do-it-all talent who has a rare skill set.
Key stats: 16.0 ppg; 6.0 rpg; 1.7 apg

11. Aaron Craft, G, Ohio State, So. – The former high school quarterback sensation is the ultimate court general, directing traffic for perhaps the most talented team in the conference. Craft could score more but defers to teammates, setting them up for scoring opportunities.
Key stats: 8.1 ppg; 3.2 rpg; 5.2 apg.

12. Tim Hardaway, G, Michigan, So. – The silky smooth Hardaway can score from anywhere on the court with a sweet jumper or dribble-drive to the basket. He?s the consummate scorer and a future pro.
Key stats: 15.7 ppg; 3.6 rpg; 2.6 apg

13. Trey Burke, G, Michigan, Fr. – The precocious Burke has an uncanny ability to know when to push the pace or when to slow things down. Few could have envisioned the impact the youngster is having.
Key stats: 14.3 ppg; 3.6 rpg; 4.9 apg

14. Jordan Taylor, G, Wisconsin, Sr. – The prototypical lead guard, Taylor never wavered when the Badgers were struggling a few weeks ago. He led the Badgers to two wins last week and has them back in the thick of a jumbled Big Ten race.
Key stats: 13.5 ppg; 3.9 rpg; 4.5 apg

15. Christian Watford, F, Indiana, Jr. – With Cody Zeller commanding attention in the paint, Watford has been able to play more often facing the basket. And he has excelled, roaming the 3-point line to shoot or drive.
Key stats: 12.9 ppg; 5.5 rpg; 1.4 apg