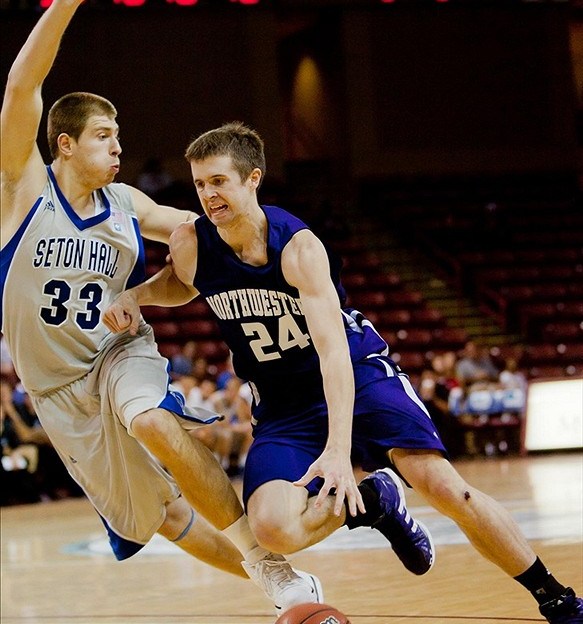 John Shurna knows time is running out. The Northwestern forward knows there?s a sense of urgency for the Wildcats to get on a roll. History is at stake. Specifically: The school?s first NCAA tourney trip.

Shurna is doing his part. Entering the week, he led the Big Ten in scoring with an 18.9 average while grabbing 6.1 rebounds and dishing 2.6 assists per game.

But it?s scoring that has made Shurna famous in Big Ten circles. In fact, the 6-9, 215-pound senior has been one of the conference?s most prolific scorers the last three seasons, averaging 18.2 points as sophomore and 16.6 as a junior.

Shurna and the Wildcats are 11-5 overall and 1-3 in the Big Ten. Many bracketologists have Northwestern in the Big Dance, but its resume could use bolstering. The Wildcats have lost four of their last five games, coming off a tough overtime loss at Michigan on Wednesday. A visit from Michigan State-the lone unbeaten team in league play-looms on Saturday followed by games at Wisconsin and at Minnesota. Shurna knows the challenges-he also knows the possibilities. I caught up with Shurna as he prepped for the Spartans.

Q: What have been some of the good things about the season so far?
A: We had a great start to the season and won the Charleston Classic. That was a good test for our team right off the bat. We faced some adversity in some tight games and were able to pull them out. I think that was a good sign for our team. We?ve had a couple of close losses the last couple of games but we hope to bounce back this weekend vs. Michigan State.

Q: Which areas on the team need to improve?
A: I think defensively there always is room for improvement. I think one aspect we really have to focus on is rebounding. That has been an area we have won and lost games on. If we rebound well, we manage to stay in close games. That?s big for us. Offensively, we need to continue to run through our offense and try to get good shots.

Q: Talk about your chemistry with Drew Crawford (third in the Big Ten in scoring with a 17.4 average.)
A: Drew is a fantastic player. He?s able to do a lot. It?s really great to have him as a teammate. He can go for a big night any night. He has been huge for us. He has been pretty consistent throughout the year for us, which has been huge. When we need a big shot, he has been able to step up and hit a big shot for us.

Q: What would it mean to get to the NCAA tourney for the first time in school history?
A: It would be huge, but we can?t really look that far ahead at the moment. We are just trying to take it one game at a time. We lost a couple close games here in the Big Ten. You have to find a way to win those games and I think hopefully we will be able to learn from it, come back and have a strong finish in the Big Ten.

Q: Many experts think the Big Ten is the nation?s best league, projecting as many as eight teams in the Big Dance. What are your impressions of the conference?
A: There are no easy games. It?s a tough game every night. If you don?t bring it, you are gonna lose. A lot of games are gonna come down to the wire and it?s exciting. People enjoy that. It?s a very competitive league. Every team is bringing its best, so if you don?t bring it, you aren?t gonna win.

Q: Is this the best Northwestern team you have been on? (The Wildcats went 17-14 when Shurna was a freshman; 20-14 as a sophomore; 20-13 as a junior with NIT appearances each season and no better than an 8-10 Big Ten mark.)
A: It?s hard to say. They all have been very different. I think what?s great about this team is we are just so competitive and we try to get better each day. A lot of close games, we have been able to pull out. Unfortunately, we haven?t been able to win those last two, but I think we have shown we can compete with anyone. We know we have to bring our energy and bring our best if we want to win.

Q: Talk about coach Bill Carmody. Is there a side of him we don?t know, or a story you can tell about him?
A: He wears his emotions on his sleeves. What you see on the court is what you get. He expects a lot out of people, and I think we expect a lot out of ourselves as well. He?s a really good coach and we enjoy playing for him.

Listen to the entire interview here: