Dienhart: Who's Up & Down This Week 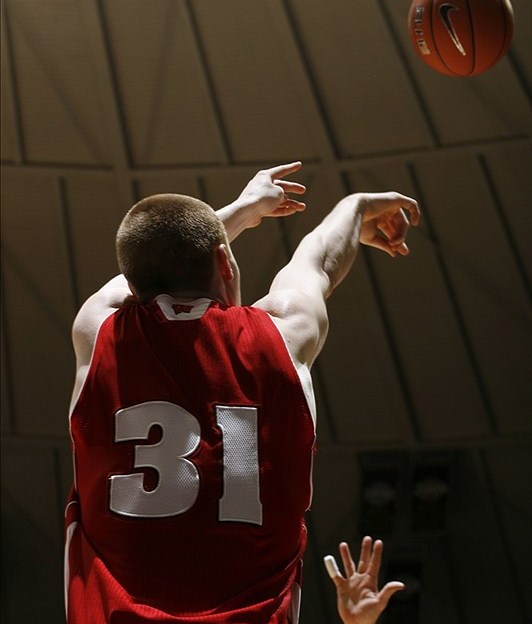 That was quite a week in Big Ten men's basketball. When I wrote Monday about Wisconsin's struggles, I didn't imagine they'd shake it off at Purdue later in the week. Then I spoke with Jerry Palm and he told me the Big Ten had eight tourney teams as of right now – we'll check back with him next week to see if that's changed. The week got better when I attended the Illinois game and witnessed Brandon Paul's amazing 43-point night. That will surely shake up my weekly Big Ten Player Rankings.

Now it's time for me to end the week with my Big Ten Three-Pointers. This is when I take three my three weekly quick shots on various subjects around the Big Ten. I'll give you my take in the post below but you tell me what you think in the comments box, too. Let's keep the conversation going, both here on BTN.com and on Twitter where I post as @BTNTomDienhart. Ready, set ? let's go!

2. Michigan: Showed guts in home win over Northwestern; four of next five on the road. Gulp.

3. Illinois: That heart-stopping win over Ohio State was timed perfectly.

Three Top contenders for Big Ten Coach of the Year.
1. Tom Izzo, Michigan State. His team is defending and rebound, which all his great squads do. Final Four trip No. 7 may loom.

2. Tom Crean, Indiana. Yes, that home loss to Minnesota hurts, but no one expect the Hoosiers to be this good. Crean has it rolling. And the rest of the Big Ten should be scared.

3. John Beilein, Michigan. He has the Wolverines ranked No. 13 and in the title hunt. Imagine if Darius Morris had not turned pro? Like Indiana, the Wolverines are on the rise.

Three Things I Learned
1. Michigan State may be a Final Four team. The Spartans have won 15 in a row, their longest winning skein since a 22-game run in 1998-99. That team went to the Final Four.

2. Northwestern may not be ready for prime time. It let a great opportunity for a resume-building win at Michigan slip away on Wednesday night. The Wildcats couldn?t protect a 10-point second half lead in falling in overtime, 66-64. Turnovers and poor rebounding doomed Northwestern.

3. We may have jumped the gun on Indiana. The Hoosiers raced to a 15-1 start and No. 7 ranking with wins over the Nos. 1 and 2 teams in the nation. And the lone loss was respectable, coming at Michigan State. But then came a stunning 77-74 loss at home to Indiana on Thursday that exposed some defensive issues and susceptibility when not shooting well from 3-point range.

Three Truths
1. Iowa is struggling. It looked like the Hawkeyes may be turning a corner after winning back-to-back road games at Minnesota and Wisconsin. But Iowa got routed in consecutive games in losing to Ohio State 29 points before falling to Michigan State by 34 on Tuesday. At one point vs. the Spartans, Iowa coach Fran McCaffery got whistled for a technical and slammed a chair during a subsequent time out.

2. Ohio State needs to pick it up. The Buckeyes? 79-74 loss at Illinois dropped Ohio State to 3-2 in the Big Ten, leaving it little margin for error down the stretch if it wasn?t to win the Big Ten. Team defense looks like an issue, as does leadership. This team misses leaders like David Lighty, Dallas Lauderdale and Jon Diebler. The visit from Indiana on Sunday is a must-win.

3. The next five games will define Michigan?s season. At Iowa; vs. Michigan State; at Arkansas; at Purdue; at Ohio State (full schedule here). If the Wolverines come out of that 4-1, they will be primed for a Big Ten title push. And Michigan hasn?t won the league regular-season title since-are you ready for this?-the 1985-86 season.

Three Impressive wins
1. Nebraska 70, Penn State 58. This one may have slipped past you, but it was a big deal in Lincoln. Why? Because this was the Cornhuskers? first Big Ten victory. Congratulations!

2. Illinois 79, Ohio State 74. A win over the No. 5 team in the nation could be the catalyst this team needs, riding the hot hand of guard Brandon Paul. His 43 points were the third-most ever scored by an Illini. And he was huge down the stretch, scoring his team?s final 15 points including a huge 3-pointer to give Illinois a 74-70 cushion in the final minute.

3. Minnesota 77, Indiana 74. The Gophers picked a monster time to register their first Big Ten win of the season, scrambling the Big Ten race by knocking off the No. 7 Hoosiers behind Austin Hollins? 18 points. Indiana was doomed by 4-of-18 shooting from 3-point range.

Three Games to Look Forward To
1. Michigan at Iowa, Jan. 14. After opening with back-to-back road wins, the Hawkeyes are skidding with two losses in a row. A home win over Michigan could be the spark Iowa needs to get back on track. But the Wolverines are motivated and rolling behind Tim Hardaway Jr.

2. Indiana at Ohio State, Jan. 15. Each team has even more urgency coming into this game off a loss. The No. 5 Buckeyes fell 74-70 earlier this season at Indiana and are coming off a tough loss at Illinois. The Hoosiers got dumped at home by Minnesota on Thursday. Ohio State needs this game more with two league losses. The Hoosiers had all five starters score in double-digits the last time out against the Buckeyes. Ohio State has won six of the last seven vs. Indiana but has lost the last five times it played the Hoosiers when Indiana was ranked.

3. Michigan State at Michigan, Jan. 17. Two hot teams will battle to stay in the thick of the Big Ten race. Michigan?s three losses have come vs. foes ranked 12th or higher. The Wolverines won both meetings last year and will be looking for their first three-game-or-longer winning streak vs. the Spartans since 1996-98.

2. Wisconsin is alive! The Badgers were the most disappointing team in the Big Ten, taking a three-game losing skid to Purdue. But Wisconsin showed moxie in taking 67-62 win, just the program?s third win ever in Mackey Arena and snapped the Boilermakers? 26-game home winning streak. This could be the victory that gets Wisconsin back on track.

3. The Big Ten title chase will be a run to the finish. Will it be Michigan State? Indiana? Illinois? Michigan? Ohio State? The Big Ten is loaded with good teams and may get as many as eight teams in the NCAA tourney. Check out the latest standings.