Big Ten Geeks: A Bad Night for the Hoosier State 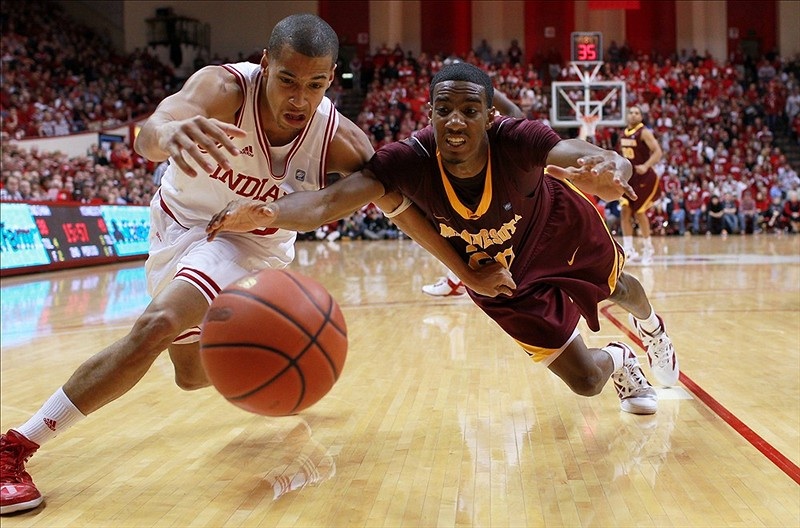 How do you break a Big Ten losing streak? Last night, the unlikely answer was to take a trip to snowy Indiana. Wisconsin and Minnesota got their seasons back on track with impressive wins in the Hoosier state.

First, the Badgers used a return to shooting form and a bit of good fortune to snap Purdue's 26-game home winning streak. Wisconsin's offense was unstoppable in the early going, as the Badgers went uptempo (by their standards) and often took the first available open shot. The strategy worked, as Wisconsin made five of their first six attempts from deep and opened up a 22-4 lead on the stunned Boilermakers. The boo birds were out early in Mackey, as the frustrated crowd questioned every call. It looked as though Purdue would be blown out on their own floor.

To their credit, the Boilermakers kept fighting, and they managed to trim the lead to 12 points at the half. It's not often that a team will go an entire half with just one turnover and still be losing, but that was the situation for Purdue. If some of their shots would simply start falling, they could get back into the game, and that's exactly what happened. Matt Painter's team bombed away from deep and scorched one of the nation's better defenses–check out the shift in Purdue's offensive efficiency after the break:

Still, without the defense we're used to seeing from Purdue, it wasn't quite enough. Wisconsin came away from Mackey with an impressive and much-needed victory.

It shouldn't be overlooked that Wisconsin was a bit fortunate to finish with a semi-comfortable five point margin. Purdue shot just 55 percent from the foul line, compared to 83 percent for the Badgers. Sure, Purdue isn't a good free throw shooting team, converting just 61 percent coming in, but it wouldn't have been crazy for both teams to shoot 70 percent at the line. If that happened, this game might have come down to a final possession. The strange thing is that it wasn't the usual suspects tossing up bricks for Purdue; Robbie Hummel and D.J. Byrd were a combined two for seven at the line.

Overshadowed by the loss was a very nice performance from Terone Johnson–16 points, five rebounds, four assists, and just one turnover. The sophomore showed flashes of being what Purdue will desperately need next season: a go-to scorer.

Wisconsin had five players score double figures in a welcome return to offensive efficiency. Don't look now, but the Badgers could make some hay over the coming weeks. Wisconsin should be favored in at least the next five games, although a trip to Illinois and a hosting of Indiana could be tricky. It's not unthinkable that the Badgers are 7-3 when Ohio State comes to town in early February.

Elsewhere in the state, the lackluster defense of the Indiana Hoosiers caught up with them in a stunning home loss to Minnesota. Tubby Smith got great play out of his young backcourt, and it was three-point shooting that staked the Gophers to a small halftime lead. After the break, Minnesota shifted gears and barely thought about threes, instead getting their points by attacking the rim and grabbing over half of their misses. The Gophers held onto their lead by sheer effort, and they were rewarded with a win that teams like Kentucky, Ohio State, and Michigan were unable to get this season.

It seems that many commentators are blaming Indiana's reliance on the three-point shot for this upset, but that's not really the truth. Sure, the Hoosiers struggled from deep, hitting just 22 percent, but this team is actually below the national average in terms of how many threes they attempt. They are proficient at the three, but not overly reliant on it. Even with those outside struggles, Indiana still scored a brisk 1.10 points per trip. Offense wasn't the problem.

The Hoosiers lost because they couldn't stop a Minnesota team that had been struggling to score in conference play. Indiana is now allowing 1.12 points per possession to B1G opponents–that's worst in the conference and barely better than last season's 1.14 defensive efficiency. That permissive defense is why we Geeks doubted the Hoosiers as a tournament team before the season. Indiana is still going to win a lot of games, but Tom Crean has to get that defense playing better if they hope to have a truly special season. This Sunday's visit to an irked Buckeyes squad could get ugly otherwise.

For Minnesota, this is an outstanding win, but it really just cancels out the effect of losing at home to Iowa. The Gophers got great guard play in this one, and an observer can't help but think what this team could be looking like if Trevor Mbakwe were healthy. For that matter, this team could easily be 3-2 in conference if they had won the close games against Illinois and Iowa. The outlook still isn't great, but it's not impossible for Minnesota to get to eight conference wins and garner some at-large consideration. Austin Hollins scored 18 points on 10 shots and didn't turn the ball over once. We see that the best shooting team in the nation has finished in the 42-44 percent range each of the past nine seasons. Going into last night's game, Indiana was shooting 47.6 percent from three (illustrated on the chart by the big spike). Obviously, reversion to the mean was bound to kick in at some point, especially as the Hoosiers faced a steady diet of solid Big Ten defenses. After last night, Indiana is shooting 45.9 percent from three, still well above the normal range. This is no bold statement, but expect the Hoosiers to suffer more cold shooting nights before the season is out.

On Wednesday night, Northwestern missed yet another golden opportunity in an overtime loss at Michigan. For the second straight game, the Wildcats defended well enough to win but just couldn't make plays when they needed to. Northwestern led this one for all but a minute and a half of regulation, but Michigan just got too many chances. The Wolverines attempted 18 more field goals than the Wildcats, helping them to overcome a bad shooting night.

Like Minnesota, Northwestern could be looking at a much different season if they had won their close games–it is just a couple bounces from 3-1 to 1-3. The Wildcats have a respectable non-conference resume, so they figure to get at-large consideration if they can reach eight B1G wins. The two match-ups with Minnesota are going to be crucial to both teams as they scratch and claw to get there. If they split the series, it might mean neither team makes it.

Michigan, for their part, managed to win on their worst shooting night of the season, and they owe much of that to offensive rebounding and solid defense. Trey Burke had a fantastic night, posting 19 points, seven rebounds, seven assists, and just one turnover. The Wolverines are on a roll and boast a stellar +0.14 in-conference efficiency margin, but they still have four games left against Ohio State and Michigan State.

Also on Wednesday, Nebraska picked up their first ever Big Ten win at home against Penn State. The Huskers did it with stingy field goal defense, which was supposed to be their calling card this season. Now that Nebraska is closer to full health, I expect visits to Lincoln to be much less pleasant than they have been. Tim Frazier put up a crazy statline (30 points, six rebounds, four assists, six steals) but got little help.

Saturday brings tricky road games for Michigan and Michigan State, as they face Iowa and Northwestern, respectively. Sunday's big game is the rematch of Indiana and Ohio State, with both teams coming off surprising losses. Nobody wants to start a losing streak in the deepest conference in the country.