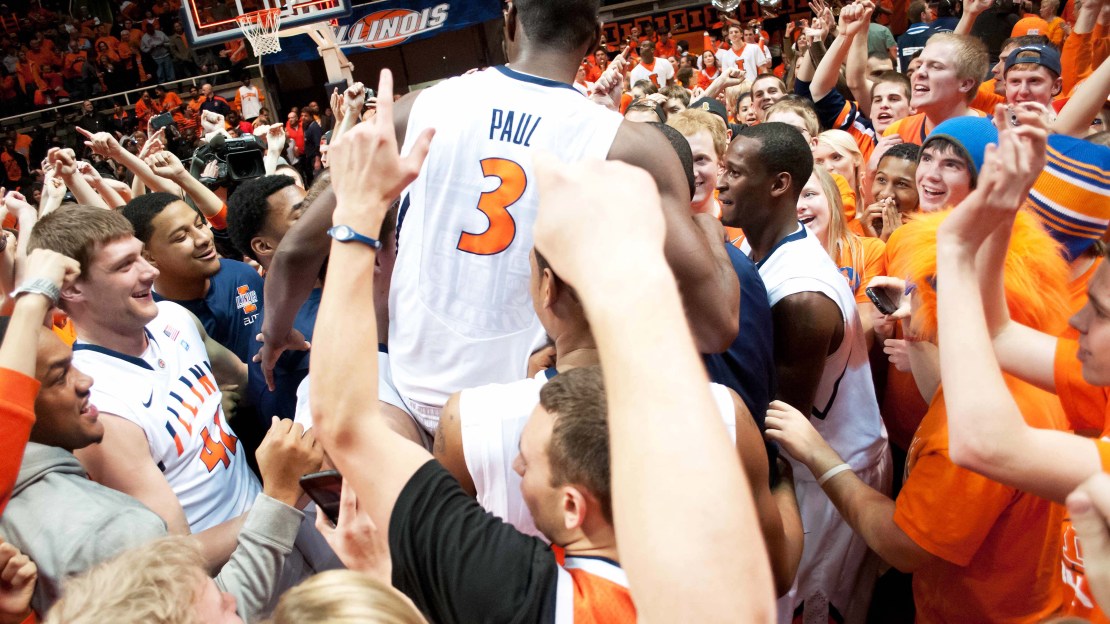 On a night when legendary Illinois coach Lou Henson was honored with a banner that was raised to the rafters of Assembly Hall, Illini guard Brandon Paul raised the roof on the place. Paul notched a career-high 43-point effort in propelling Illinois to a 79-74 victory over Ohio State in what could be a season-defining game for the Illini.

Jumpers in the lane.

Drives to the basket.

Pull-ups on the wing.

When he looked up, Paul had hit a hyper-efficient 11-of-15 shots, including 8-of-10 from 3-point range, and 13-of-15 from the free-throw line. And he also posted a career-high four blocks and led the team with eight rebounds, putting on a show in front of Henson and many former great Illini players like Stephen Bardo and Marcus Liberty.

?It was something,? said Paul.

Paul saved his best for the end, nailing a rain-making 3-pointer from deep in the right corner with less than a minute to go and Illinois clinging to a 71-70 lead. The big bucket pushed the Illini?s lead to 74-70-and it never looked back in a seesaw game it trailed 39-34 at the half.

?I came off two baseline screens,? said Paul of his biggest shot of his big night. ?(Aaron) Craft fought through the screens. But I got my body squared.?

?You have to give him credit,? said Ohio State coach Thad Matta. ?We probably didn?t guard him as well as we should have.?

Now what for Illinois? This is a team that is famous for following up moments like this and games like this with poor performances.

Was this really the same Illinois team that earlier this season got smoked by UNLV, needed a late rally to down St. Bonaventure and looked flat at Purdue?

Heck, the last time out, Illinois was booed lustily by its fans as it left the court trailing Nebraska-NEBRASKA–following a sluggish first-half on Saturday.

Tonight, Illinois was cheered like a teen pop idol-and Paul was raised on the shoulders of his teammates following a scintillating effort that was the third-most prolific scoring night in school history. Only Dave Downey (53 points in 1963) and Andy Kaufmann (46 in 1990) have had better nights than Paul.

And his eight 3-pointers set a school single-game record.

Even more remarkable: Paul was shooting just 28 percent from 3-point range entering the game. He nailed 80 percent of his long-range shots on this night.

The big fella is right. Illinois hit 60 percent of its shots and 61 percent from 3-point range, helping it overcome its biggest deficit of the season (11 points) to win. That helped wash away the ugliness of 18 turnovers. And just think: Illinois did all of this without point man Sam Maniscalco, who continues to deal with an ankle injury.

?We had way too many turnovers,? said Paul, who helped Illinois extend its home winning skein to 14 games. ?But we fought through it and got the win.?

This could be the spark Illinois needs. The Illini were trying to make a statement on this night. It needed this game, pushing its record to 15-3 overall and 4-1 in the Big Ten. But, again, the Illini have been plagued by inconsistency, a trait throughout Bruce Weber?s career in Champaign.

This makes the Big Ten race intriguing. Are the Buckeyes, now 15-3 overall and 3-2 in league play, the best team? Is it Michigan State, which won its 15th game in a row tonight? Indiana looks formidable. And now, Illinois is in the conversation with this victory.

?We let down on the defensive end,? said Matta. ?We have to find another gear.?

And it better find that gear quickly with Indiana visiting Columbus on Sunday. The Hoosiers took down the Buckeyes earlier this season, taking a 74-71 decision in Bloomington on December 31.

Ohio State remains an elite team led by Jared Sullinger. He entered the game averaging 17.1 points and 9.6 rebounds, picking up where he left off last year when he dominated the conference as a precocious freshman. Sullinger has an array of low-post moves, including a deft drop-step. He?s also able to step out and hit a 3-pointer.

Bottom line: Sullinger is a physical force on the interior who is a mismatch for most any team in the nation. And that was the case on this night, when he notched 21 points and five boards. But Illinois had Paul, who was too much.

?We have to regroup and move on,? said Matta, who saw Deshaun Thomas tally 23 points and six rebounds.

A big key for Ohio State?s hopes of winning the Big Ten and reaching the Final Four will be keeping Sullinger healthy. Injury is the only thing that has slowed him during his career. He has missed two games this year with back spasms.

Ohio State is still motivated by last year, when the Buckeyes finished 32-2 and were the No. 1 overall seed in the NCAA tourney. But Ohio State?s run to glory ended with a 62-60 Sweet 16 loss to Kentucky.

Matta has accomplished a lot, guiding Ohio State to at least a regular-season or league tourney title in five of his seven seasons in Columbus. He also has two Sweet 16 appearances and a trip to the title game in 2007. But the national championship remains elusive. This loss should sharpen the Buckeyes? resolve and remind them of how perilous a season can be when the calendar turns to March.

Illinois? It also is sensing the possibilities after this unexpected win.

?We have some time before we play Penn State,? said Illinois coach Bruce Weber. ?We are coming together.?