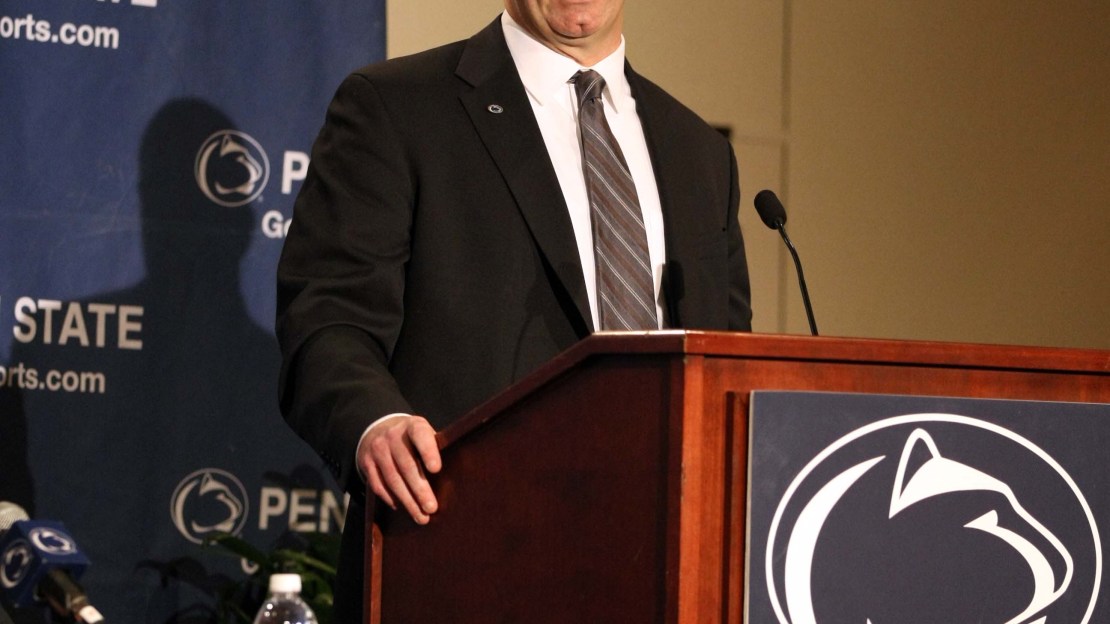 (AP) Bill O'Brien took the podium, looked straight ahead and uttered the kind of words you'd expect from someone who had just been introduced as Penn State's new head football coach. "This is unbelievable." Pronouncing himself as the new leader of Penn Stateon Saturday, O'Brien read a statement, then took questions from the media before posing for pictures. He reiterated his intention to remain offensive coordinator for the New England Patriots for the duration of their playoff run. Read the full AP recap and check out GoPSUSports.com's story. Also, watch our one-on-one interview with O'Brien now.

Bill Belichick on the O'Brien hire: "This is a great match between a storied program and a old-school football coach."

Tedy Bruschi on @NFL32 says Bill O'Brien will make all of critics of the Penn State hire "choke on their words." #NFL32

1990-'92 – Brown (Player)
O'Brien served as a linebacker and defensive end for Brown University. He was a three-year letterman and graduated in 1992 with a bachelor of arts degree with a double concentration in political science and behavior management.

1995-2002 – Georgia Tech
O'Brien joined the staff at Georgia Tech where he spent three seasons as an offensive graduate assistant. He began a three-year stint as the Yellow Jackets' running backs coach in 1998 ('98-2000). In each of his three seasons leading the running backs, Georgia Tech finished no worse than third in the ACC in rushing. He also served as the recruiting coordinator in 1999 and 2000.  During his final two seasons at Georgia Tech, O'Brien was the offensive coordinator and quarterbacks coach, in addition to being assistant head coach in 2002. He worked under George O'Leary (1994-2001) and Chan Gailey (2002) while at Georgia Tech.

2003-'04 – Maryland
Following his stint at Georgia Tech, O'Brien spent two seasons as the running backs coach under Ralph Friedgen at Maryland. The Terrapins finished second in the ACC rushing rankings and defeated West Virginia in the Gator Bowl during the 2003 season.

2005-'06 – Duke
He completed a two-year stint with the Blue Devils where he served as the offensive coordinator and quarterbacks coach.

2007-'11 – New England Patriots
O'Brien's most recent stop during his career was in New England. He originally joined the Patriots staff in 2007 before one season as the wide receivers coach (2008), two seasons as the quarterbacks coach (2009-'10) and one season as the offensive coordinator (2011). In 2008, despite losing quarterback Tom Brady in week one of the season, receivers Wes Welker and Randy Moss both finished with 1,000-yard seasons under the leadership of O'Brien. Brady earned Pro Bowl selections in each of the three seasons under the guidance of O'Brien, including an NFL MVP and Offensive Player of the Year honor in 2010. This season, the Patriots offense played an instrumental role in a 13-3 season.  Brady finished second in the NFL in passing yardage with 5,235 yards. As a team, New England averaged 428.0 yards per game (2nd in NFL), 317.8 passing yards per game (2nd in NFL) and 32.1 points per game (3rd in NFL). O'Brien has worked with some of the most innovative players and coaches during his time in the NFL. New England is the No. 1 seed in AFC for upcoming NFL Playoffs.

Personal
Born on Oct. 23, 1969 in Dorchester, Mass., O'Brien was raised in Andover. He and his wife, Colleen, have two sons, Jack and Michael.

Leading Penn State
The 15th leader of Penn State football inherits a Nittany Lion squad coming off a 9-4 season. Despite graduating 23 seniors, the Nittany Lions return a great deal of talent on both sides of the ball. In all, the Lions return significant playing experience to nine different spots on offense, 11 spots on defense and at kicker/ punter from the 2011 squad.  Penn State's offseason officially begins today with a new leader directing the program. In 239 days, a new chapter of Penn State football will begin at Beaver Stadium when the Nittany Lions charge out of the South Tunnel under the direction of head coach Bill O'Brien during the season-opener against Ohio.