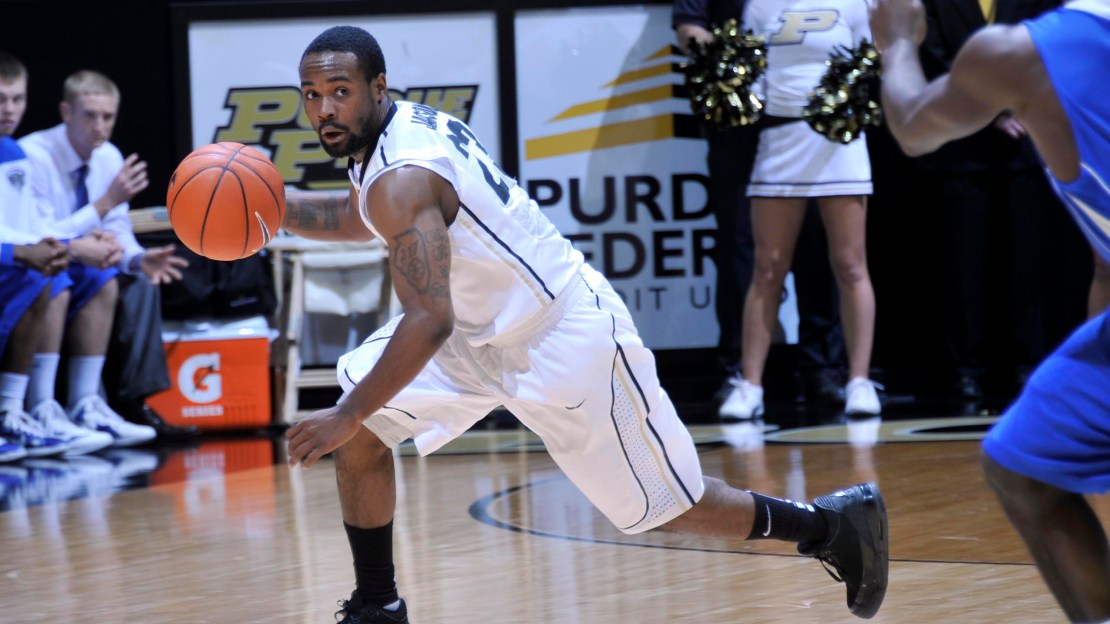 Penn State smothered Purdue's shooters as the Nittany Lions beat the Boilermakers 65-45 Thursday at the Bryce Jordan Center for Penn State's first Big Ten win of the season. At Indiana, Christian Watford scored 25 points and grabbed seven rebounds to lift No. 12 Indiana to a 73-71 win over No. 13 Michigan at Assembly Hall in Bloomington.

FINAL: Penn State held Purdue to 15-of-47 shooting as defense led the Nittany Lions to a 65-45 victory on Thursday at the Bryce Jordan Center in University Park. Scoring so few points is rare for Purdue (12-4), a team that came in averaging 74.5 points per game this season. Penn State (9-7) held the Boilermakers to 32 percent shooting from the field, hauled in 26 defensive boards, while only allowing five offensive rebounds, and just 12 free throw attempts.

Billy Oliver picked up the offensive burden for the Nittany Lions, finishing with 21 points and 7-of-11 shooting from beyond the arc. Penn State was on fire from beyond the arc during the game, shooting 48 percent (10-of-21). The Nittany Lions had 16 assists on 24 baskets. More Penn State scoring came from Tim Frazier, who had 15 points and Jermaine Marshall, who added 10. Robbie Hummel had 14 points and pulled down five rebounds for Purdue in the game.

The Boilermakers also got a double-digit effort from D.J. Byrd, who scored 12 points. Penn State won the rebounding battle en route to victory, pulling down 36 boards to 23 for Purdue. The Nittany Lions never trailed in the game. Penn State's largest lead was 22, which came with 1:53 remaining. Leading 24-17 in the first, the Nittany Lions used an 8-0 spurt to open their cushion to 15 points late in the first. Sasa Borovnjak capped the run off with a field goal that helped the Nittany Lions lead 32-18 at the half.

FINAL: Christian Watford scored 25 points and grabbed seven rebounds to lift No. 12 Indiana to a 73-71 win over No. 13 Michigan on Thursday at Assembly Hall in Bloomington. Indiana (14-1) got solid performances from both Watford and Cody Zeller. Watford made 8-of-11 shots from the floor. Zeller had 18 points and shot 8-of-10 from the field.

Michigan (12-3) can look to its performance from the charity stripe as one of the factors in its loss, as the Wolverines shot  64 percent (7-of-11) from the line. A 17-6 run led the Hoosiers to an early 11-point lead. Matt Roth finished off the run with a field goal and propelled the Hoosiers to a 39-32 lead at intermission. Indiana shot 55 percent from the field (27-of-49).

Jordan Morgan scored 12 points, pulled down nine rebounds, and went 6-of-7 from the field for Michigan in the loss. The Wolverines hit 47 percent of their field goals (27-of-58). Michigan was hot from long range, hitting 10-of-24 threes for a 42 percent night from beyond the arc. The Wolverines also got solid contributions from Tim Hardaway Jr., who scored 19 points, Stu Douglass, who scored 11, and Trey Burke, who put up 10 points.

The Hoosiers never trailed in the game. Indiana's largest lead was 15, which came with 5:04 to go in the first half. Both teams had 28 rebounds in the game. The Hoosiers snapped Michigan's seven-game winning streak with the victory.

HALFTIME: Christian Watford scored 14 points for No. 12 Indiana in the first half to carry the Hoosiers to a 39-32 lead over No. 13 Michigan. Watford and Cody Zeller are leading the way for Indiana. Watford shot 6-of-8 from the field. Zeller scored nine points and shot 4-of-5 from the field.

PREVIEW: Freshman Trey Burke went nuts last time out for in the No. 13 Michigan Wolverines (12-2), scoring 27 points in a 61-56 win over the Minnesota Golden Gophers (12-4). A win for the Wolverines on Thursday would add to Michigan's seven-game winning streak.

Burke ranks No. 3 in the Big Ten this season in assists per game at 5.0 per game. The freshman has dished out 70 total assists. As a team, the Wolverines average 14.6 assists per game. Michigan is riding an explosive offense to an impressive 11.0-point scoring margin for the year. The Wolverines are averaging 70.9 points per game, and shoot 48.1 percent from the field.

The No. 12 Indiana Hoosiers (13-1) have shredded the opposition in most contests this season, outscoring opponents by an average of 20.7 points. The Hoosiers score 82.6 points per game and shoot 44.7 percent from beyond the arc. Indiana rises up to the competition with a 2-1 record against teams ranked in the Top 50 of the RPI this season. But the Wolverines will likely draw upon the lessons they learned during the 73-69 victory they secured in the team's last game against each other.