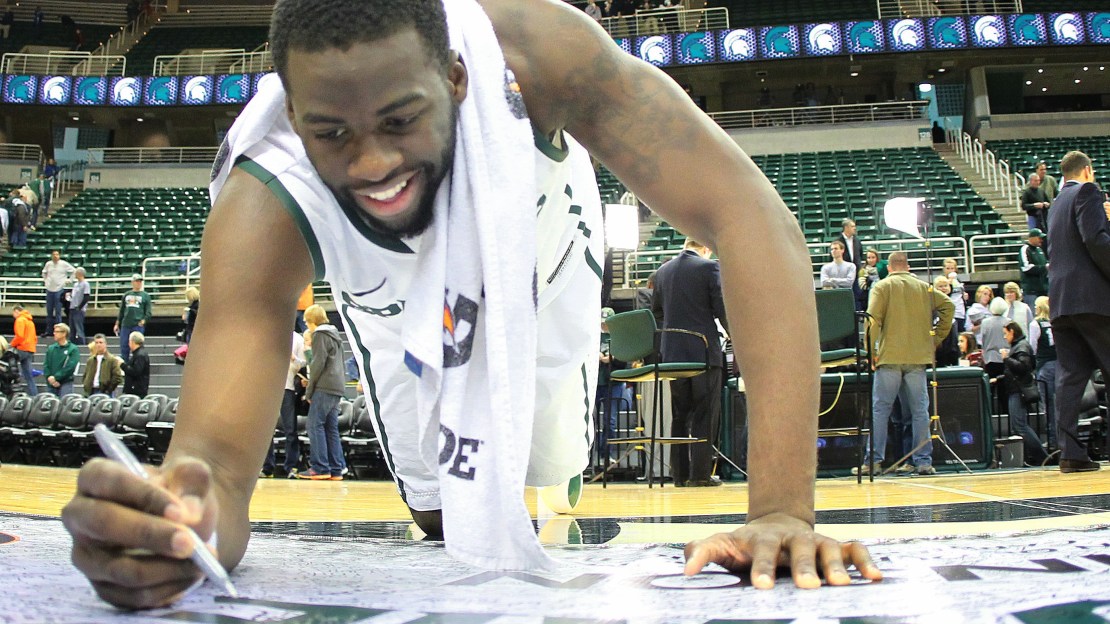 One of our popular shows returns this season with "The Journey: Big Ten Basketball 2012," and the first show airs at 8 p.m. ET Sunday on BTN TV and BTN2Go. It's a fantastic weekly show that takes you inside the games and practices – just look at season debut opening clip in this post. Every week before each episode airs, BTN.com will chat with someone involved in the production of the show. This week before the season debut we spoke with Julian Darnell, a BTN senior features producer who works on the show.

On the season premiere you'll see the connection Michigan State senior Draymond Green has with his hometown of Saginaw, meet Indiana freshman Cody Zeller and share a special moment as members of Indiana's 1987 National Championship Team return to Bloomington. Also, learn more about Matt Painter?s roots in the state of Indiana and see how two Ohio State McDonald?s All-Americans have taken different paths to success in Columbus. Read our Q&A with Darnell in this post.

BTN.com: Even though the show debuts Sunday, I know the Journey team has been following teams and stories from the start of the season. How do you approach the season? What kind of planning is involved?

Darnell: We take a look at trends. We look at story lines from the past season. We had seniors leaving from last season, guys like Jon Diebler and David Lighty and Dallas Lauderdale. Then Demetri McCamey from Illinois, and Juice Thompson from Northwestern. But then you have big number zero coming back for Ohio State in Jared Sullinger, so that's a no-brainer right there.

BTN.com: But then things change. That's the nature of sports. So how do you handle those kinds of changes as you ramp up to the first show?

Darnell: We adjust. We adjusted when Trevor Mbakwe got hurt. Some kind of story line from last season guides us but we adjust. Sullinger is an obvious one. We keep an eye on who's stepping up. Look at a guy like Deshaun Thomas, he's a guy who has stepped up and you'll see him in this first episode.

BTN.com: Indiana's remarkable resurgence must have popped up the radar for you guys, no?

Darnell: Our preparation for Indiana actually started with the McDonald's All-America Game this summer. You look at the list of the players in the game and see Cody Zeller. You look at his basketball lineage, with the brother who played at Notre Dame and another still at North Carolina. So when non-conference starts we kept an eye on him and it lends itself to introducing our audience to who this player is and what he has done.

BTN.com: Having done this show for a few seasons, is a big part of the first episode laying out the stories you will follow in later shows, or is it just the start of the basketball season?

Darnell: No, there are other guys who can spring forward as the season develops. I harken back to last year. Darius Morris was a guy we kept an eye on, but he didn't pop up until episode seven or eight. Then once we saw him and had his story, he became more prominent as we headed to the final episode. It varies.

BTN.com: You must do a significant amount of preparation before you go to games, right? Games can be such crazy events that you have to have a game plan to work off of heading in.

Darnell: You got that right.

BTN.com: So, for instance, the recent Ohio State-Indiana game. You were there for Indiana's victory.

Darnell: The plan was to make a concerted effort to isolate on the guys we're following. For Indiana it was Zeller and Sullinger. But hey, foul trouble kind of changed that. That's where you have to make a decision in the field – and work with the cameramen who all understand how to adjust – that the story can change. But when the story is back out on the court, you have to adjust back. One of the big parts for this game was Zeller fouling out. But Sullinger got him to foul out. And so that would be a highlight in our story. We knew Zeller had to guard Sullinger and so we watched that closely. It was interesting to see those two guys go at each other.

BTN.com: Isn't that the advantage to a show like The Journey? You have the time to look at these very specific angles.

Darnell: Yes, that's something we do focus on and want. I wanted my cameraman to isolate on these guys. And you'll see some of that in the first episode. Zeller got a nice lay-in and one on Sullinger, then Sullinger came back and got him to fouled out of the game. That was just a great sequence.

BTN.com: From your seat, how has the show evolved over the years?

Darnell: I try to make a concerted effort to touch families and their stories. If time allows, we want to find out about their background. Not just the kids but the coaches, too. Matt Painter is a good example. Matt almost left Missouri this year and when he stayed at Purdue I knew that was something I wanted to touch on this year. I wanted to know "Who is Matt Painter?" He was nice enough to have me come out to Colorado Springs and watch him coach the USA Basketball team and to get a little bit of a sense of who he is. I went back to Muncie (Painter's hometown in Indiana) and got his old high school coach, talked to his best friend, talked to his dad. It all gives you a sense of who the man is. I think that is fun for me and it's fun to see.

BTN.com: And it rounds out one's perception of these people we see on TV usually only during games. At least, I find that as a viewer.

Darnell: Well, the parents and the high school coaches and the families are as much a part of their journeys as well. They help form these kids that we see play. Sometimes there are time constrains but we do make an effort, and I like the idea of weaving family in. And nothing beats old video.

Darnell: Old film is so great. In this first episode you're going to see high school video of Matt Painter the ball player from Delta High School. I got it from his high school coach. It's like, "Whoa, Matt Painter was a basketball player." Listen, he could really play in high school. I think it's fun to do and it's a lot of fun to watch. I thought I knew about Matt Painter but there's a lot more to him. That's what we try to show on this show.

The show airs Sunday at 8 p.m. ET and bookmark www.BTN.com/journey to get more updates on the show all season and follow the show on Twitter @BTNJourney.