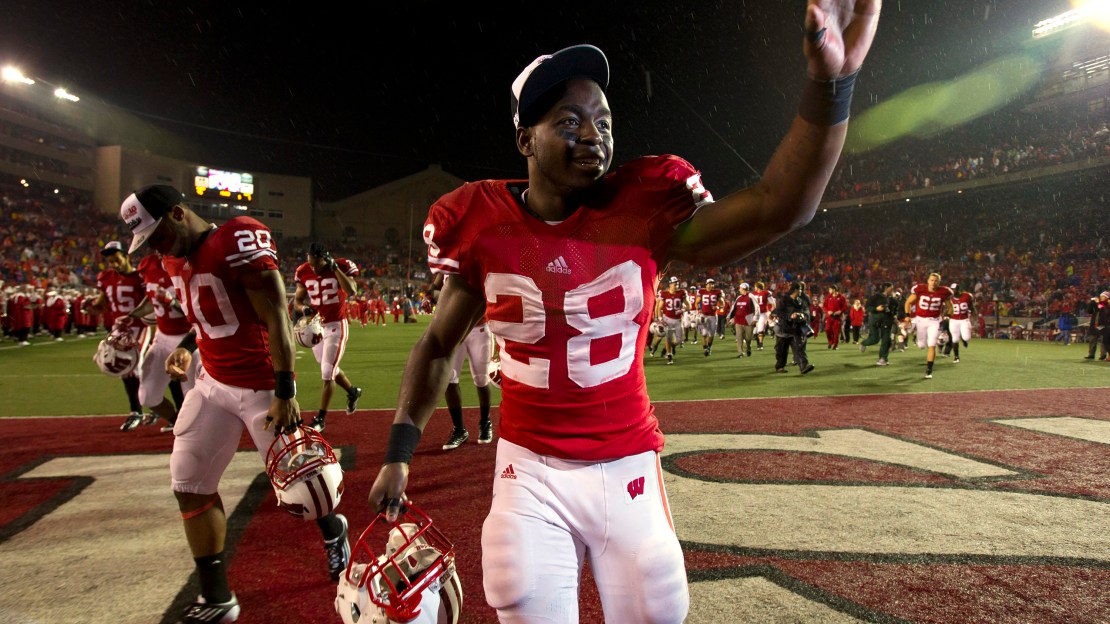 Wisconsin may have lost the Rose Bowl, but it gained a big win today when Montee Ball opted to return to school for his senior season. ?I?m looking forward to bettering my stock and improving in the offseason,? said Ball, who said the NFL told him he projected to be a third-round draft choice.

Alabama?s Trent Richardson, Boise State?s Doug Martin, Miami?s Lamar Miller, Washington?s Chris Polk and Virginia Tech?s David Wilson all were projected by most draft experts to be picked ahead of Ball. A few weeks ago, USC quarterback Matt Barkley announced he would be back for his senior year, surprising many. Stanford quarterback Andrew Luck did the same thing after the 2010 season. Ball is the latest college star to eschew the NFL.

Ball emerged as one of the nation?s top running backs in 2011, seemingly having little left to prove in college. After dropping weight in the offseason, Ball transformed his body and took his game to another level. He led the nation with 1,923 yards rushing in 2011 and tied the NCAA single-season record for touchdowns with 39. Ball ran for over 100 yards in 10 games and scored at least two touchdowns in 13 of 14 games. He also caught 20 passes for 255 yards.

Ball also has helped the Badgers win consecutive Rose Bowl titles, rushing 32 times for 164 yards and a score in a 45-38 loss to Oregon earlier this week. But now, Ball will get a chance to get back to Pasadena next season.

?This is one of the toughest decisions of my life,? said Ball, who wants to add muscle to get stronger to better break tackles and also improve in pass protection. ?I?m getting some negative feedback, but they don?t know what I?m capable of doing. It?s my decision and I believe I made the right one.?

Ball figures to be one of the faces of college football on a national level in 2012 and a front-runner for the Heisman after finishing fourth in balloting this year. In fact, he?ll be the top returning vote-getter with Baylor?s Robert Griffin, Stanford?s Andrew Luck and Richardson all departing.

By returning, Ball is risking injury. Running backs have only so much tread on their tires, and Ball already has 568 career carries for 3,310 yards at Wisconsin. That?s a big workload.

And Ball will be returning to a team whose offensive coaching staff is turning over radically. Offensive coordinator Paul Chryst is off to coach Pitt, taking with him run-game coordinator/offensive line coach Bob Bostad. Receivers coach DelVaughn Alexander also has left for Arizona State.

Plus, star quarterback Russell Wilson and stud receiver Nick Toon are out of eligibility, taking away two big playmakers from what was a dynamic and balanced Wisconsin attack that ranked first in the Big Ten in total offense (466.9 ypg) and scoring (44.6 ppg).

Bottom line: There are a lot of questions facing the Wisconsin offense in 2012. Still, Ball opted to return. And it?s a return that will help stabilize this strong program that may be the favorite in the Leaders Division.

?I think I caught a lot of people off guard by coming back,? said Ball, who can further cement his legacy alongside former great Badger running backs like Ron Dayne, Rufus Ferguson, Brian Calhoun Brent Moss, Alan Ameche, Terrell Fletcher and Billy Marek, among others.
Ball also made a lot of Badger fans happy.