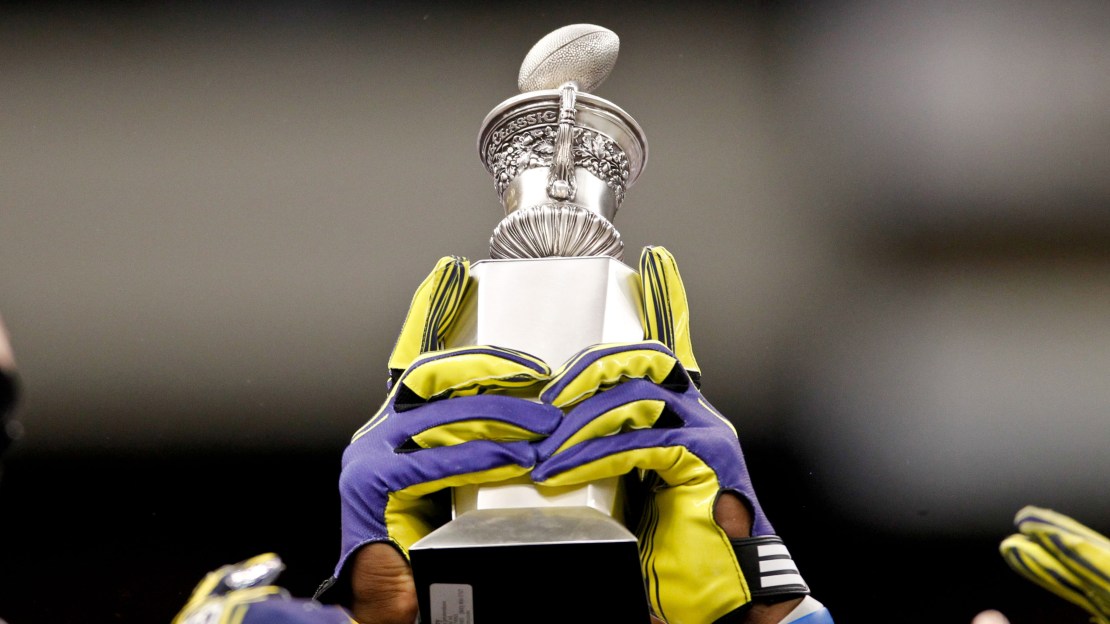 The bowl season is over, with the Big Ten forging a 4-6 mark in the postseason. Michigan, Michigan State, Purdue and Illinois all scored victories. Wisconsin and Ohio State lost close games, while Northwestern?s comeback against  Texas A&M came up just short and Iowa fell as well. Penn State? Nebraska? Maybe they will do better next season. Here?s a look at the best of the bowl season in my Honor Roll. Tell me what you think in the comments at the end of my post.

Best Game: There were a lot of good ones, with Oregon and Wisconsin playing one of the most exciting Rose Bowls in history en route to setting a record for points scored. And Michigan?s overtime victory over Virginia Tech in the Sugar Bowl was exhilarating. But I?m going to go with Michigan State?s 33-30 triple overtime win over Georgia. The Spartans rallied from a 16-0 halftime hole and then scored the game-tying touchdown to force overtime with 14 seconds left. Michigan State then blocked a Georgia field goal in the third overtime to secure the thrilling victory. It was the Spartans? first bowl win since 2001.

Best Rushing Effort: How about Purdue?s Akeem Shavers? Who? The Boilermakers rushed with aplomb behind the JC transfer, who seemingly came out of nowhere. The lithe speedster ran 22 times for 149 yards to lead a ground game that notched 266 yards. Prior to this contest, Shavers? season-high was 75 yards against FCS Southeast Missouri State in September. The Boilers entered the game sixth in the Big Ten in rushing (174.7 ypg). Wisconsin?s Montee Ball also excelled with 32 carries for 164 yards and his 39th score to tie the NCAA single-season touchdown mark.

Best Passing Effort: Michigan State?s Kirk Cousins? was his usual stellar self. In the win over Georgia, the savvy senior hit 27-of-50 passes for 300 yards. Yes, he tossed three picks, but Cousins threw a key touchdown pass in the fourth quarter and led the Spartans on the game-tying touchdown drive in the final moments of the game. I also have to mention Wisconsin?s Russell Wilson, who hit 19-of-25 passes for 296 yards with two touchdowns and a pick. Best receiving effort: There were some good ones. Michigan State TE Brian Linthicum caught seven passes for 115 yards, both career highs. Wisconsin?s Nick Toon grabbed nine passes for 104 yards and a score. But Badgers teammate Jared Abbrederis takes the cake with four catches for 119 yards (29.8 ypc) and a touchdown.

Best Special Teams Play: There was that big blocked field goal by Michigan State in the third overtime of the Outback Bowl to preserve victory for the Spartans. But I?m going with the 99-yard kickoff return for a touchdown by Purdue?s Raheem Mostert that turned out to be the difference in a 37-32 win over Western Michigan in the Little Caesar?s Bowl.

Best Defensive Touchdown: I liked Wisconsin defensive end?s Louis Nzegwu?s 33-yard fumble return for a touchdown in the Rose Bowl. But Terry Hawthorne?s 39-yard interception return for a touchdown against UCLA gave the Illini a lead it wouldn?t relinquish in helping Illinois win back-to-back bowls for the first time in school history.

Best Defensive Player: Michigan State CB Darqueze Dennard picked off a pass in the third quarter to help give the Spartans some needed momentum as they trailed 16-0. Later in the third quarter, Dennard returned an interception 38 yards for a touchdown to cut Georgia?s lead to 16-14.

Zaniest Play: There were few zanier plays than Michigan?s fake field goal late in the first half of the Sugar Bowl. Holder Drew Dileo heaved an ill-advised pass into a cadre of Virginia Tech players, and the ball ricocheted off the Hokies and inexplicably into the hands of Wolverine long snapper Jareth Glanda for an 11-yard gain with less than 10 seconds left in the second quarter. Michigan went on to kick a 24-yard field goal to take a 10-6 halftime lead.

Best Clutch Play: After Virginia Tech missed a field goal to open overtime, Michigan K Brendan Gibbons nailed a 37-yard field goal to propel the Wolverines to a 23-20 overtime victory over the Hokies in the Sugar Bowl. It was Gibbons? third field goal of the game on a night when Michigan had just 184 yards of offense. Not bad for a guy who hit just 1-of-5 field goals in 2010. Most Surprising Win: It probably was Michigan State over Georgia. Each school was coming off a disappointing loss in their league title game. How would the Spartans react, especially after seeing rival Michigan-a team it beat and finished ahead of-go to a BCS bowl? Michigan State showed moxie and heart in rallying to victory over a hot Georgia team to end a five-game bowl losing streak.

Most Surprising Loss: Nebraska falling to South Carolina. It wasn?t a total shock that the Huskers lost. Still, many felt Nebraska would prevail. But the offense struggled, scoring 13 points in the first quarter and getting shut out in the final three quarters en route to producing 253 yards with two touchdowns in a 30-13 loss.

Best Defensive Effort: Illinois defensive coordinator Vic Koenning has done a good job all season-and that continued as interim head coach for the bowl game. His defense limited UCLA to 219 yards (18 rushing) and forced two turnovers in a 20-14 victory. Now, Koenning is off to run North Carolina?s defense.

Best Offensive Effort: Wisconsin offensive coordinator Paul Chryst went out with a bang before leaving to coach Pitt, helping the Badgers gain 508 yards in a wild 45-38 loss to Oregon in the Rose Bowl. As has been the case all season, Wisconsin was balanced with 212 yards rushing and 296 yards passing.