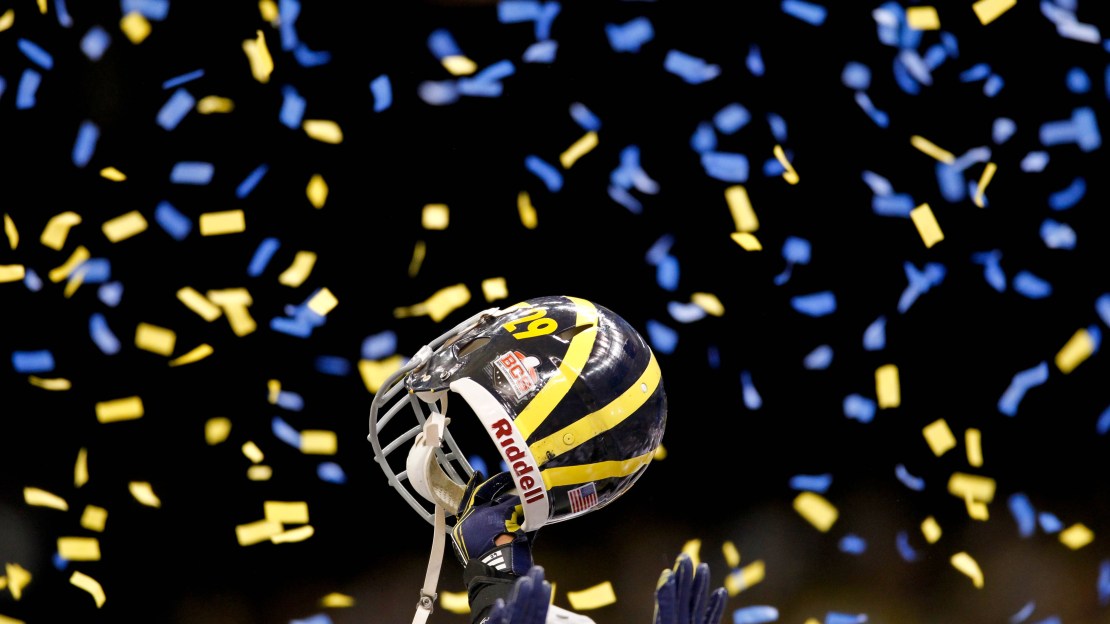 (AP) Brendan Gibbons drilled a 37-yard field goal down the middle in overtime to lift Michigan to a 23-20 victory over Virginia Tech in the Sugar Bowl on Tuesday night. The victory capped an impressive debut season for head coach Brady Hoke, who has led the Wolverines (11-2) back to prominence with a BCS bowl victory. Denard Robinson highlighted an otherwise unspectacular night with touchdown passes of 45 and 18 yards to Junior Hemingway. Virginia Tech (11-3) had more than double Michigan's total yards, 377-184, and had 22 first downs to Michigan's 12. Read the full AP recap, get Tom Dienhart's reaction, see the box score, check out our photo gallery and don't forget about our 2011-12 bowl schedule. And get your Sugar Bowl Champs gear here in our BTN,com store.

FINAL: No. 12 Michigan used a 37-yard  field goal by Brendan Gibbons to defeat No. 11 Virginia Tech in overtime, 23-20 Tuesday in the Allstate Sugar Bowl. After a missed field goal by the Hokies, Michigan capitalized on its opportunity to win the game on the leg of Gibbons. Junior Hemingway led the No. 12 Michigan receiving corps, hauling in two passes for 63 yards and two touchdowns.

Logan Thomas did his best to carry No. 11 Virginia Tech's offense, turning 16 carries into 52 rushing yards and one touchdown. Virginia Tech (11-3) racked up 375 total yards. The Hokies complemented Thomas' passing with 162 yards rushing on 48 attempts. Michigan's (11-2) Denard Robinson was good for 118 yards during the game, completing nine of 21 passes. Robinson tossed two touchdowns and one interception. The Wolverines finished with 184 total yards, including 129 yards passing while completing 10 of 22 attempts. Michigan rushed 30 times for just 55 yards.

FOURTH QUARTER: At the end of the fourth quarter, Virginia Tech and Michigan are tied 20-20. The Hokies tied the game at 17 after Logan Thomas turned a quarterback sneak into a one-yard touchdown run to end a 17-play, 61-yard drive. Virginia Tech connected on a two-point conversion when Marcus Davis completed a two-yard pass. The Wolverines broke the 17-17 stalemate when Brendan Gibbons kicked a 39-yard field goal to put the finishing touches on an eight-play, 23-yard scoring drive.

A fumble recovery by Michigan put the Wolverines at the Virginia Tech 45-yard line to open the drive. The Hokies got even after Justin Myer made a 26-yard field goal to end an 11-play, 82-yard drive that tied the score at 20. Virginia Tech crossed midfield on Thomas' 30-yard pass to Danny Coale from the 28-yard line. Going into overtime, the Hokies have outgained Michigan 370 yards to 179.

THIRD QUARTER: Michigan's Junior Hemingway led the offense in the third quarter. He caught an 18-yard touchdown pass, and the Wolverines now lead 17-9. Michigan expanded its lead to 17-6 thanks to a three-play, 35-yard drive that ended when Denard Robinson and Hemingway hooked up for an 18-yard touchdown. The Wolverines started in good field position when Frank Clark intercepted a Logan Thomas pass.

Virginia Tech made the score 17-9 after Justin Myer kicked a 36-yard field goal to finish off a 39-yard drive. The Hokies went to the air just two times during that series. Virginia Tech will start the fourth quarter with the ball at Michigan's 48-yard line.

SECOND QUARTER: Junior Hemingway had a productive quarter for Michigan. He caught a 45-yard touchdown pass, and the Wolverines have taken the lead 10-6. The last 10 points have been scored by Michigan. Virginia Tech opened up the lead, 6-0, after marching down the field for a 12-play, 46-yard drive that ended when Justin Myer kicked a 43-yard field goal. The Hokies crossed midfield on Logan Thomas' 27-yard pass to Danny Coale from the 29-yard line.

Denard Robinson's 45-yard touchdown pass to Hemingway put the Wolverines on top 7-6, capping off a 10-play, 96-yard drive. Michigan added to its advantage when Brendan Gibbons kicked a 23-yard field goal, the clincher of a six-play, 20-yard drive to give the Wolverines the lead, 10-6. Michigan had to settle for a field goal after failing to reach the endzone from Virginia Tech's one-yard line. A fumble recovery by the Wolverines set Michigan up at the Virginia Tech 26-yard line to start the drive. The Wolverines ran just one time on that drive. The Hokies will receive to start the second half.

The Hokies took the game's first lead after Justin Myer kicked a 36-yard field goal on the last play of a 12-play, 44-yard drive. Despite driving to the Wolverines' four-yard line, Virginia Tech had to settle for a field goal. The Hokies have possession on Michigan's 31-yard line to start the second quarter.