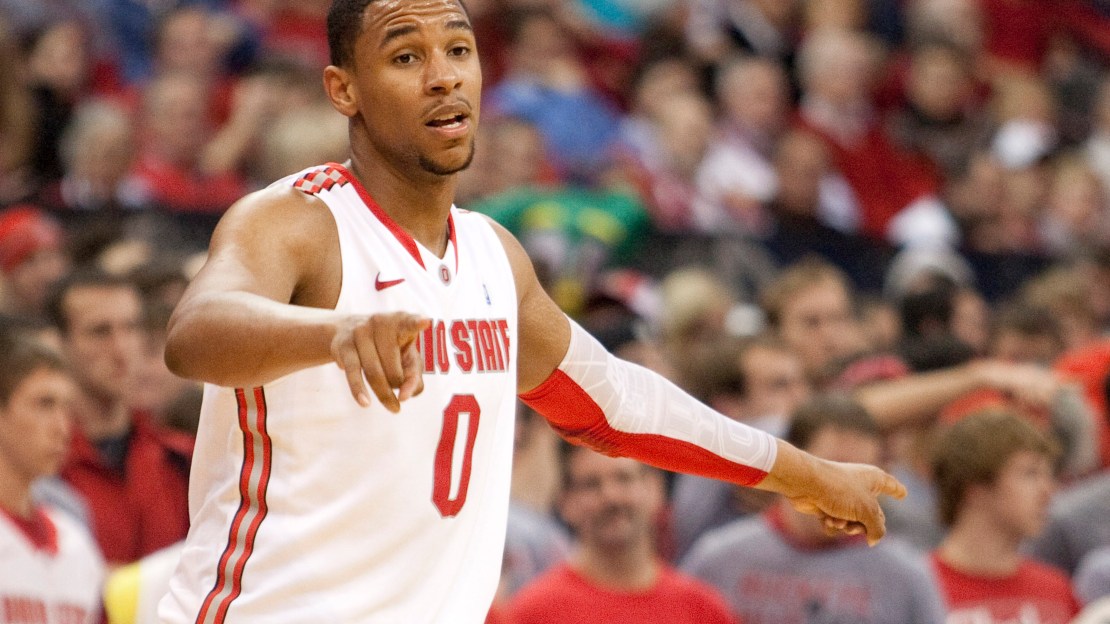 No. 11 Michigan State beat No. 19 Wisconsin in an overtime thriller Tuesday night at the Kohl Center (recap), while No. 7 Ohio State blew out Nebraska (recap). Catch up on all the action on our Big Ten scoreboard and find stats, recaps and video in this post. There was a crazy finish to the aforementioned Spartans-Badgers game that we'll probably be talking about the rest of the season. Watch the video of Ryan Evans' 3-pointer at the buzzer that was waved off following a lengthy review.

FINAL: Jared Sullinger scored 19 points and grabbed 12 rebounds to lift No. 7 Ohio State to a 71-40 win over Nebraska on Tuesday at Value City Arena in Columbus. Scoring that few points is rare for Nebraska (8-6), a team that came in averaging 63.8 points per game this season. Ohio State (14-2) held the Cornhuskers to 30 percent shooting from the field, hauled in 29 defensive boards, while only allowing four offensive rebounds, and just six free throw attempts. The Buckeyes went on a 17-2 run to seize a 13-point advantage with 12:10 to go in the first half. Evan Ravenel ended the run with a field goal, which helped the Buckeyes hold a 44-20 advantage at halftime. Deshaun Thomas had a quality shooting game, nailing 7-of-9 shots from the field and scoring 15 points. Ohio State hit 54 percent of its field goals (30-of-56). The Buckeyes crashed the offensive glass effectively, grabbing 13 offensive boards. Ohio State also got a solid contribution from William Buford, who scored 13. Brandon Richardson contributed 11 points for Nebraska in the game. The Cornhuskers also got double-digit performances from Toney McCray, who scored 13 points and Bo Spencer, who put up 10 points. Winning the battle on the boards was crucial for the Buckeyes as they grabbed 42 rebounds to 18 for Nebraska.

HALFTIME: Jared Sullinger scored 12 points for No. 7 Ohio State as the Buckeyes lead Nebraska 44-20 at the half. Sullinger and Aaron Craft are leading the way for the Buckeyes. Sullinger grabbed six rebounds and shot 5-of-6 from the field. Craft scored four points and shot 2-of-3 from the field. The Cornhuskers have been held to 33 percent shooting in the first half. Ohio State has generated more of its offensive production from inside the three-point line, making 17-of-21 two-point field goals and hitting 2-of-7 from beyond the arc. Eight Ohio State players scored in the half. Nebraska's Toney McCray had a big first half, with nine points.

FINAL: No. 19 Wisconsin misfired from the floor and the free throw line all game in a 63-60 overtime loss to No. 11 Michigan State on Tuesday at the Kohl Center in Madison. Wisconsin (12-4) made 70 percent of its free throws (19-of-27) and it shot 33 percent (18-of-54) from the field. Jordan Taylor had a good game for the Badgers in defeat with 28 points and 7-of-11 shooting from the field. Michigan State (14-2), thanks to a free throw by Draymond Green, led by seven points with 31 seconds remaining in overtime and yet nearly saw that lead disappear completely. Green sparked the Spartans, as he scored 18 points and yanked down 14 rebounds in the win. Michigan State struggled from the floor, shooting 39 percent (24-of-62). The Spartans gave themselves second chances during the game, snatching 14 offensive rebounds. Michigan State also got a solid contribution from Keith Appling, who scored 16. Winning the rebounding battle was a key to victory for the Spartans as they outrebounded Wisconsin 40-28. Michigan State pushes its winning streak to 14 games with the victory.

HALFTIME: No. 19 Wisconsin leads 22-21 over No. 11 Michigan State at the half thanks to solid production from Mike Bruesewitz. The Badgers have the lead at halftime due in large part to their ability to get to the foul line. Through 20 minutes of play, Wisconsin is 9-for-12 from the free throw line. Wisconsin got points from seven different players. Seven Michigan State players have scored. The Badgers' Bruesewitz already has two points and five rebounds. The Spartans' Draymond Green had a big first half, with six points and seven rebounds.