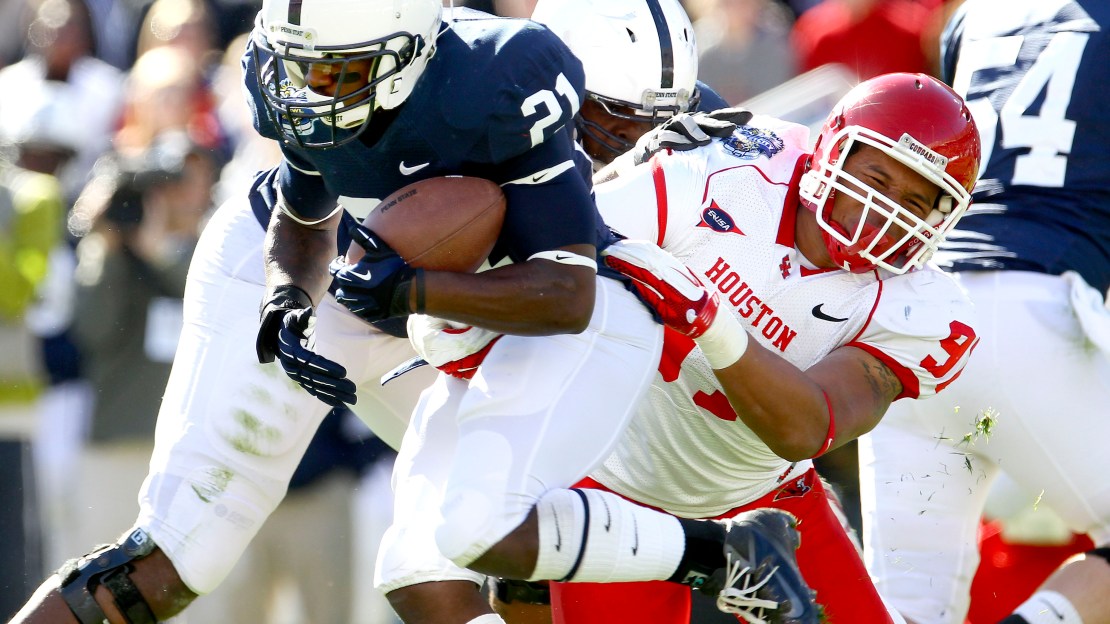 (AP) Penn State's tumultuous year ended with a 30-14 loss to Houston in the TicketCity Bowl on Monday, a dispiriting finish to a season in which coach Joe Paterno was fired as part of a child sex-abuse scandal that shook college sports. The 24th-ranked Nittany Lions were picked apart by Cougars star Case Keenum, who threw for 532 yards and three touchdowns. Penn State was allowing 162 yards passing per game, but Keenum threw for more than double that by halftime. He burned the Nittany Lions' veteran secondary with touchdown passes of 40 and 75 yards to build a 24-7 lead by halftime. It was the school's first bowl game without Paterno as head coach since the 1962 Gator Bowl, a 17-7 loss to Florida. Read the full AP recap, get Tom Dienhart's reaction, see the box score and view our photo gallery.

FINAL: One of the best receivers in the Conference USA, No. 17 Houston's Patrick Edwards torched No. 23 Penn State's secondary for a big day as he carried Houston (13-1) to a 30-14 victory on Monday at Cotton Bowl. Edwards, who came in ranked No. 1 in the conference in receiving yards at 1524 on the year, caught nine passes for 229 yards and two touchdowns.

The Cougars came into the game with one of the conference's best air attacks, averaging 443.769230769 passing yards per game. Houston's air attack couldn't be contained, as it torched Penn State (9-4) for 533 yards and three touchdowns. Case Keenum completed 44 of 68 passes for the Cougars. He threw three touchdowns.

Houston's passing game looked flawless, despite the efforts of the Nittany Lions' secondary.

Home run plays keyed the Cougars' scoring attack. Penn State's defense gave up seven plays of at least 20 yards. With 1:58 to go in the second quarter, Keenum threw a 75-yard touchdown pass to Edwards, Houston's longest play on the day. The touchdown gave the Cougars a 24-7 lead.

The Nittany Lions' Rob Bolden went seven of 26 through the air for a total of 138 yards. Bolden finished the game with one touchdown and three interceptions.

Nick Saenz showed good hands on defense for Houston, picking off two Penn State passes. He intercepted Bolden and returned it 51 yards on third-and-11 during a key drive in the third quarter.

The Cougars racked up 600 total yards. Along with Keenum's stats in the passing game, Houston posted just 67 yards rushing on 16 attempts.

FOURTH QUARTER: Fans were treated to more punts than points in the fourth quarter, and Houston kept the game out of reach for a 30-14 victory over Penn State. There were four punts in the quarter as neither team could find a way to move the ball.

The Cougars held the Nittany Lions to just 14 yards passing during the quarter. Houston made its lead 30-14 when Andrew Hogan kicked a 21-yard field goal on the last play of a 10-play, 66-yard drive.

THIRD QUARTER: Penn State's Justin Brown led the offense in the third quarter. He caught a 69-yard touchdown pass, but the Nittany Lions have closed the gap to 27-14.

Houston got things going through the air in the quarter, passing for 110 yards. The Cougars opened up the lead, 27-7, after Andrew Hogan drilled a 37-yard field goal to end a seven-play, 47-yard drive.

Penn State made the score 27-14 after Rob Bolden threw a 69-yard touchdown pass to Brown to finish off a 63-yard drive.

Houston's Justin Johnson reached the 100-yard receiving mark for the game thanks to four catches for 51 yards in the quarter, and currently sits with 147 yards in all.

The Cougars are knocking on the door to begin the fourth quarter, with the ball at the Nittany Lions' four-yard line.

SECOND QUARTER: Patrick Edwards led Houston in the quarter. He caught two passes for 88 yards and one touchdown, and the margin is still 17, as the Cougars lead 24-7.

Penn State made the score 17-7 after Stephfon Green turned a handoff into a six-yard touchdown to finish off a 67-yard drive. The Nittany Lions' drive was keyed by Rob Bolden's 43-yard pass. Penn State ran the ball on seven of eight plays during that series, almost ignoring the passing game completely.

Houston made its lead 24-7 when Case Keenum threw a 75-yard touchdown pass to Edwards on the last play of a two-play, 84-yard drive.

The Nittany Lions will start the second half with the ball.

FIRST QUARTER: Four big plays, including Case Keenum's 40-yard pass to Patrick Edwards, sparked No. 17 Houston's offense to 17 points and the Cougars lead 17-0 at the end of the first quarter. Houston struck first when Keenum tossed a 40-yard touchdown to Edwards, the final play of a six-play, 76-yard drive. From the 24-yard line pushed the Cougars into enemy territory. The passing game accounted for every yard during that march downfield.

After just one quarter of play, the Cougars' Edwards has already clinched a 100-yard receiving day, hauling in four catches for 113 yards. In one quarter, Houston's Keenum broke the 200-yard passing mark, with 228 yards. The Cougars have the ball on No. 23 Penn State's 28-yard line to begin the second quarter.

B1G team I will be most surprised to see win today: #Penn State.

The team arrives at Cotton Bowl Stadium. Get ready! http://t.co/SZ4WRhm1