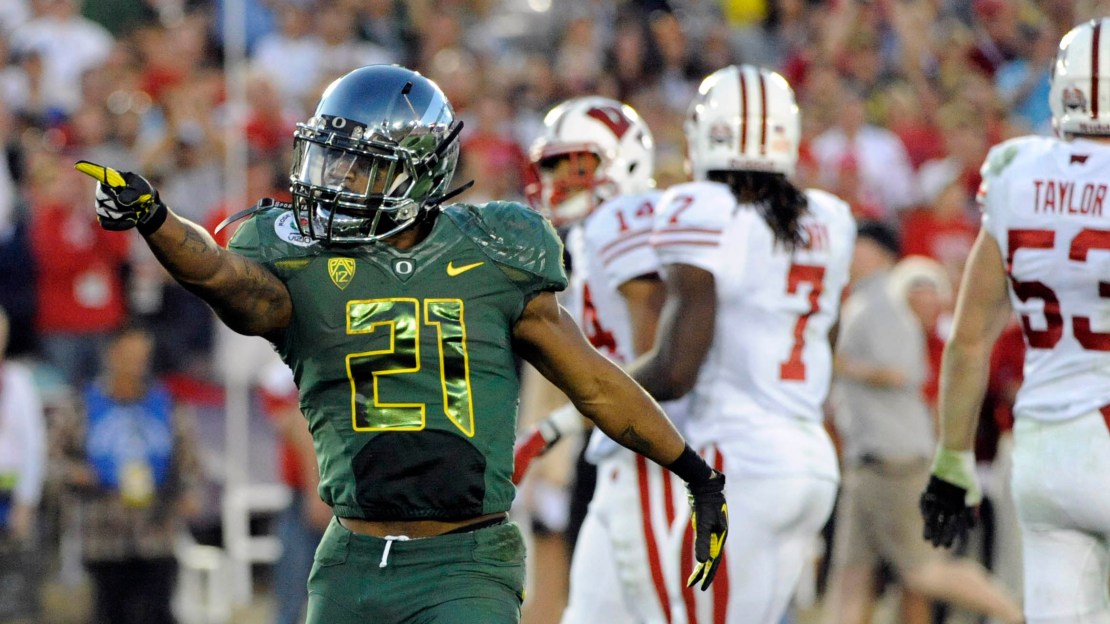 (AP) Oregon's incredible offense busted up Wisconsin and the record books on the way to the Ducks' first Rose Bowl victory in 95 years. Darron Thomas passed for three touchdowns, De'Anthony Thomas scored on runs of 91 and 64 yards, and the No. 6 Ducks earned their first bowl victory under coach Chip Kelly, holding off Wisconsin 45-38 Monday night in the highest-scoring Rose Bowl ever played. And it wasn't over until a video review confirmed the Badgers (11-3) ran out of time at the Oregon 25, out of timeouts and unable to spike the ball in time to stop the clock for a last-gasp fling. Read the full AP recap,  get Tom Dienhart's reaction, see the box score and view our photo gallery.

FINAL: Nobody expected De'Anthony Thomas to play a big role against No. 8 Wisconsin on Monday, but he stepped up in No. 5 Oregon's 45-38 victory at Rose Bowl. Thomas carried the ball two times for 155 yards and two touchdowns. Montee Ball was a bright spot in defeat for Wisconsin (11-3), as he rushed for 165 yards on 32 carries and scored one touchdown. Defense was an afterthought, as both teams lit up the scoreboard. The teams went wild on the attacking side of the ball, racking up 1130 total yards combined. Oregon (12-2) didn't capture the lead until the fourth quarter. With 14:35 to go, Darron Thomas found Lavasier Tuinei open for an 11-yard touchdown pass to give the Ducks a 42-38 lead. Oregon's Thomas went 17 of 23 through the air for a total of 269 yards. Thomas tossed three touchdowns and one interception. Thomas had a good connection with receiver Tuinei. He caught eight passes for 158 yards and two touchdowns.

The Ducks finished with 621 total yards, including 277 yards passing while completing 18 of 24 attempts. Oregon's rushing attack also contributed 344 yards to the total, with the tally coming on 40 carries. Russell Wilson threw for 296 yards while completing 19 of 25 passes for the Badgers. Wilson finished the game with two touchdowns and one interception. Wilson had a trusted receiver in Nick Toon. He caught nine passes for 104 yards and one touchdown. Wisconsin's offense finished the game having gained 509 yards, including 296 passing yards on 19 completions. The Badgers' running game proved effective, netting 213 yards on 46 rushes.

FOURTH QUARTER: Oregon landed a win over Wisconsin after securing a fourth quarter lead and hanging on, 45-38. With 14:35 to go, Darron Thomas and Lavasier Tuinei combined for an 11-yard touchdown to give the Ducks the lead, 42-38. Oregon threw for 79 yards during the quarter. The Ducks scored 10 unanswered points to close the game. Thomas' 11-yard touchdown pass to Tuinei gave Oregon the lead for good, 42-38, after a six-play, 39-yard drive. The Ducks began the drive with good field position after Kiko Alonso intercepted Russell Wilson's pass. Oregon added to its advantage when Alejandro Maldonado drilled a 30-yard field goal, the finishing touch on a 13-play, 76-yard drive to give the Ducks the lead, 45-38.

THIRD QUARTER: Wisconsin picked up 74 yards in the ground game during the third quarter, and the Badgers now lead 38-35. Wisconsin is currently on a 10-point run. De'Anthony Thomas ran 64 yards to paydirt to break the 28-28 standoff in favor of Oregon. The play finished off a three-play, 78-yard scoring drive.

The Badgers put the finishing touches on a 24-yard drive when Philip Welch kicked a 29-yard field goal to make the score 35-31. Wisconsin started in good field position at the Oregon 36-yard line when Jared Abbrederis' big kickoff return. The Badgers, on that drive, exploited a tired defensive line, running on five of seven plays. Russell Wilson's 18-yard touchdown pass to Nick Toon put Wisconsin on top 38-35, polishing off a nine-play, 62-yard drive. The Ducks' LaMichael James topped 100 yards rushing for the game in the quarter, and has plenty of time to add to his 131 total yards on the ground. Oregon has the ball at the Badgers' 21-yard line to begin the fourth quarter.

SECOND QUARTER: Oregon's Darron Thomas threw for 103 yards and two touchdowns in the quarter, and the two teams are tied 28-28 at the end of the second. The Ducks tied the game at 14 after De'Anthony Thomas ran 91 yards to paydirt to end a two-play, 95-yard drive. A seven-play, 64-yard scoring drive by Wisconsin snapped the 14-14 deadlock, as Montee Ball pounded in a three-yard touchdown run.

Oregon got even after Thomas and Kenjon Barner hooked up for a 54-yard touchdown to end a one-play, 54-yard drive that tied the score at 21. The Badgers made the score 28-21 when Wisconsin recovered a fumble in the endzone. The Ducks tied the score at 28 apiece after Thomas threw a three-yard touchdown pass to Lavasier Tuinei to polish off a 10-play, 87-yard drive.The Badgers' Ball hit 100 yards rushing for the game in the quarter, part of his 123-yard rushing performance thus far. Oregon will have possession to start the second half.

FIRST QUARTER: No. 5 Oregon's De'Anthony Thomas ran for 91 yards and one touchdown in the quarter, and the two teams are tied 14-14 at the end of the first. No. 8 Wisconsin scored when Russell Wilson found Jared Abbrederis open for a 38-yard touchdown pass to cap a seven-play, 77-yard drive, giving the Badgers the game's first lead. The Ducks tied the game at seven after LaMichael James ran one yard to paydirt to end a seven-play, 80-yard drive. Oregon used Darron Thomas' 35-yard pass to Lavasier Tuinei to fuel the drive.

Wilson kept it himself for a four-yard touchdown run to break the 7-7 standstill in favor of Wisconsin. The play capped a seven-play, 79-yard scoring drive. Montee Ball's 42-yard run from the 20-yard line pushed the Badgers into enemy territory. The Ducks tied things up at 14 when a two-play, 95-yard drive ended after Thomas turned a handoff into a 91-yard touchdown.

I don't think the #RBGPasadena ever has featured a better pair of RBs than Montee Ball and LaMichael James.

My X-factor in #RBGPasadena: Oregon speedy return men. Bucky has struggled to cover kicks. In a close game, they could be the difference.