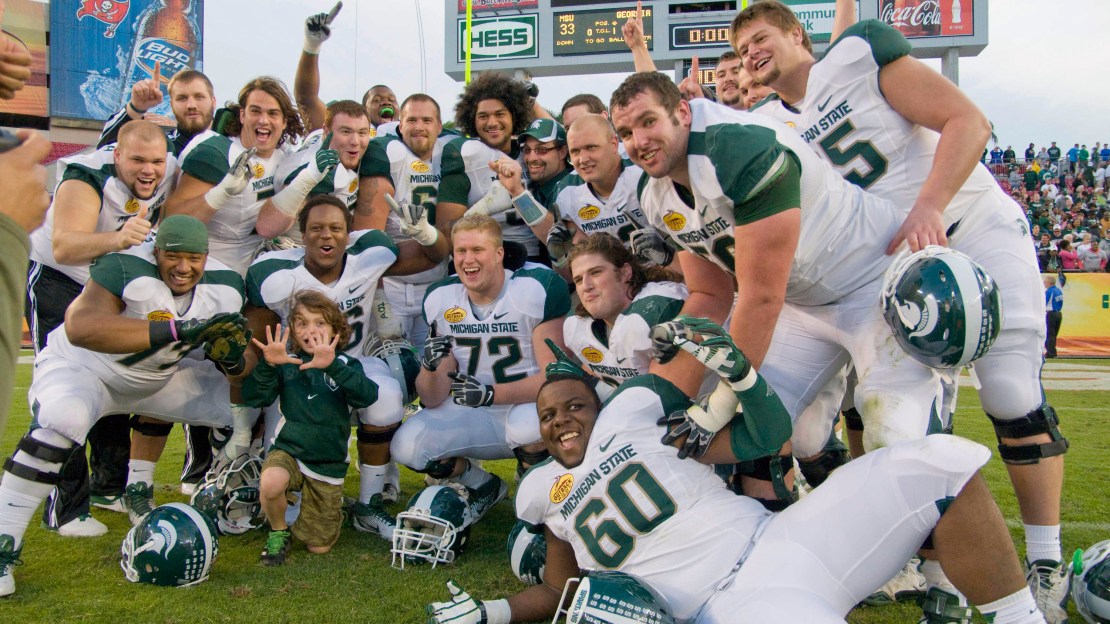 (AP) Kirk Cousins threw for 300 yards and one touchdown and Dan Conroy kicked a 28-yard field goal in the third overtime, giving No. 12 Michigan State a 33-30 victory over No. 18 Georgia in the Outback Bowl on Monday. Georgia's Blair Walsh became the Southeastern Conference's career scoring leader with a field goal in the second extra period. But he missed a 42-yarder in the first overtime after conservative play-calling and had a 47-yard attempt blocked on the final play of the game. Michigan State (11-3) ended a five-game bowl losing streak with its first postseason win since beating Fresno State in the 2001 Silicon Valley Bowl. Read the full AP recap, get Tom Dienhart's reaction, see the box score and view our photo gallery.

FINAL: No. 13 Michigan State needed extra time to beat No. 18 Georgia as it beat Georgia (10-4) 33-30 in three overtimes on Monday at Raymond James Stadium.

After Michigan State (11-3) scored on Dan Conroy's 28-yard field goal to open the third overtime, the Bulldogs failed to score, getting stopped at the 29 on fourth-and-14.

Tavarres King was a bright spot for Georgia, hauling in six catches for 205 receiving yards in a losing effort.

The Spartans' explosive offense used big plays to take down the Bulldogs. Michigan State burned Georgia's defense for five plays of more than 20 yards. With 9:50 to go in the fourth quarter, Kirk Cousins found Brian Linthicum open for a 50-yard pass, the Spartans' biggest gain of the game. The big gainer was part of a six-play drive capped off when Cousins tossed a seven-yard touchdown to Keith Nichol. That gave Michigan State a 20-19 lead.

The Bulldogs' Aaron Murray went 20 of 32 through the air for a total of 287 yards. Murray finished the game with two touchdowns and two interceptions. Murray looked for Malcolm Mitchell often. He hauled in seven catches for 49 yards.

Georgia racked up 340 total yards. The Bulldogs' passing game had to do most of the work with the rushing attack contributing just 53 yards rushing on 39 attempts.

Cousins threw for 300 yards while completing 27 of 50 passes for the Spartans. Cousins finished the game with one touchdown and three interceptions. Linthicum was the player Cousins targeted most often. He hauled in seven catches for 115 yards.

Darqueze Dennard showed good hands on defense for Michigan State, picking off two Georgia passes. He came up big during a crucial moment in the third quarter, when he intercepted Murray on first-and-10.

FOURTH QUARTER: Georgia and Michigan State are knotted up 27-27 at the end of the fourth quarter.

The Bulldogs added to their advantage when Blair Walsh kicked a 32-yard field goal, putting a bow on a four-play, -3-yard drive to give Georgia the lead, 19-14. Shawn Williams' interception of a Kirk Cousins pass put the Bulldogs at the Spartans' 12-yard line to open the drive.

Aaron Murray's 13-yard touchdown pass to Brandon Boykin gave Georgia the lead 27-20 after a six-play, 81-yard drive. The key play on the Bulldogs' drive was Murray's 53-yard pass. Georgia tacked on two points instead of one when Malcolm Mitchell completed a two-yard pass. The Bulldogs ran just one time during that march downfield.

Michigan State tied the score at 27 apiece after Le'Veon Bell pounded in a one-yard touchdown run to finish off a nine-play, 85-yard drive. Cousins' 22-yard pass to B.J. Cunningham took the Spartans from the 37 and across midfield to ignite the drive. Michigan State's rushing attack finished with just two carries on that possession.

Going into overtime, the Spartans have outgained Georgia 362 yards to 344.

THIRD QUARTER: In the third quarter, Le'Veon Bell fought back for Michigan State. He ran for 15 yards and one touchdown, but the Spartans have closed the gap to 16-14.

Georgia has given up the last 14 points.

Michigan State closed the gap to 16-8 when Bell ran eight yards to paydirt to cap off a 48-yard drive. The Spartans began the drive with good field position after Darqueze Dennard intercepted a Aaron Murray pass. Michigan State tacked on two points instead of one when Brian Linthicum completed a two-yard pass.

The Spartans made the score 16-14 when Dennard intercepted Murray's pass and returned it for a touchdown.

The Bulldogs will start the fourth quarter with the ball at their own 37-yard line.

SECOND QUARTER: Georgia's front seven stepped up in the second quarter, allowing Michigan State to gain just eight rushing yards, and the Bulldogs now lead 16-0. Georgia held the Spartans to 32 yards through the air during the quarter.

The Bulldogs expanded their lead to 9-0 thanks to a one-play, 80-yard drive that ended when Aaron Murray and Tavarres King combined for an 80-yard touchdown. Georgia made the score 16-0 when Brandon Boykin returned a punt for a touchdown.

The Bulldogs' King hauled in one catches for 80 yards in the quarter to put him over 100 yards receiving for the game. King has 146 yards on the day so far.

Michigan State will receive to start the second half.

FIRST QUARTER: No. 18 Georgia's aerial assault is on point, as the Bulldogs lead 2-0 at the end of the first quarter thanks to 83 passing yards in the quarter. Georgia stuffed Kirk Cousins in the endzone for a safety to make the score 2-0.

The Bulldogs will start the second quarter with possession at No. 13 Michigan State's 40-yard line.